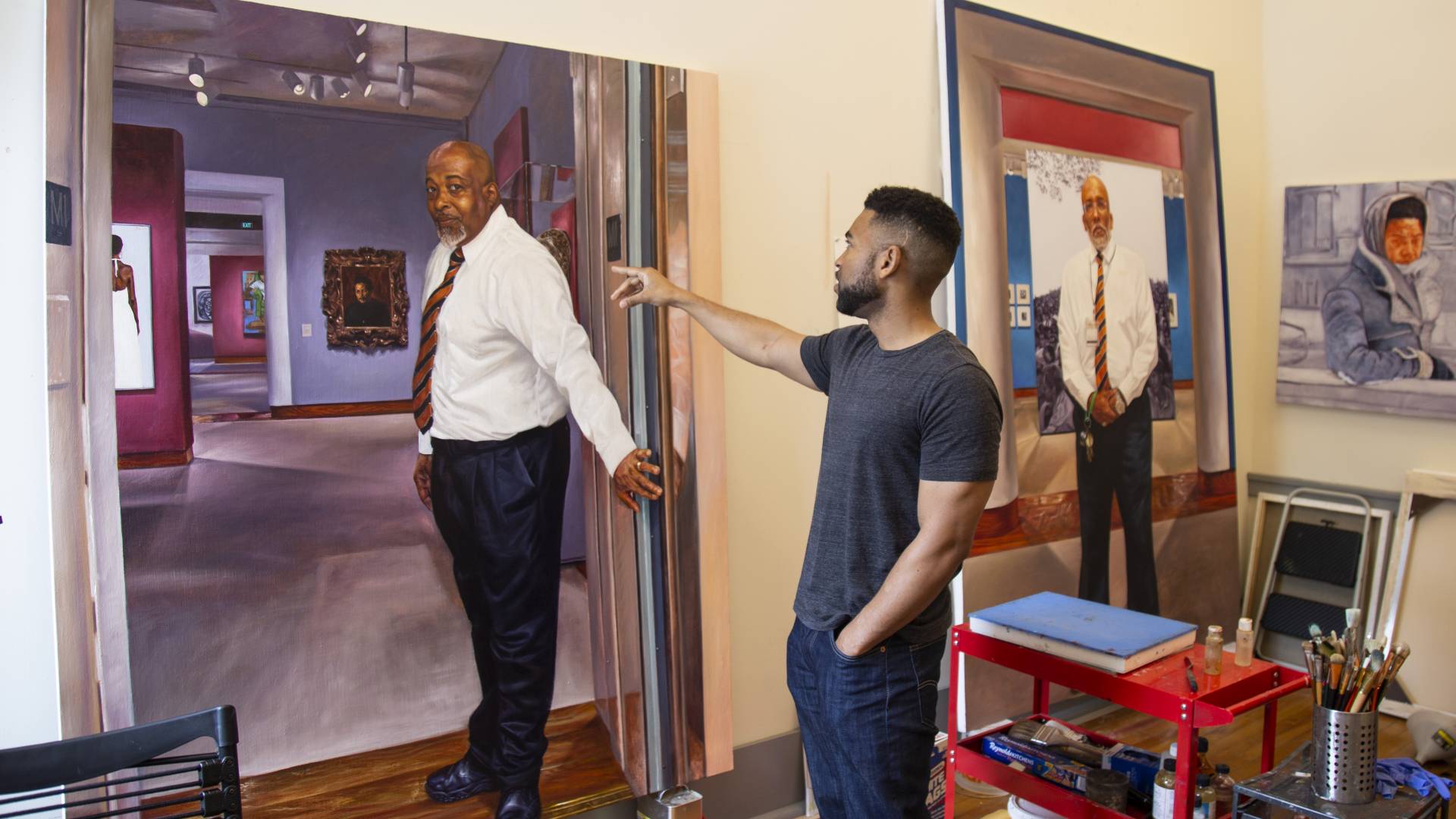 Learn more about the people, places and processes at the heart of visual artist Mario Moore’s portraiture project, “The Work of Several Lifetimes,” which consumed his year spent as a 2018-19 Hodder Fellow at Princeton.

Drawing from his own background working blue-collar jobs and his father’s experience working as a security guard at the Detroit Institute of Art, visual artist Mario Moore sought to shine a light on the African American men and women who work these types of jobs at Princeton.

“The Work of Several Lifetimes,” an exhibition of new work created over the past year by Moore, presents etchings, drawings and large-scale paintings of black men and women who work at or around campus. Moore was a 2018-19 Hodder Fellow in the Lewis Center for the Arts; the fellowship is given to artists and writers of exceptional promise to pursue independent projects at the University during the academic year.

"When I was a student, even an undergrad ... the people that I talked to most were like, dining, and security, and custodians. They really become a type of family," Moore said in the video above. "I wanted the painting to be about their workplace, and to kind of put them in the position of power, and some type of attempt of royalty, or appreciation."

The exhibition is on view through Nov. 17 in the Hurley Gallery at the Lewis Arts complex, and a panel discussion is scheduled for 4:30 p.m. Tuesday, Oct. 22, in the gallery. Panelists joining Moore include Tracy K. Smith, Lewis Center chair, Roger S. Berlind ’52 Professor in the Humanities and professor of creative writing; Imani Perry, Princeton’s Hughes-Rogers Professor of African American Studies; and Hank Towns, the University’s retired head equipment manager and one of Moore’s portrait subjects.

Moore’s subjects include two security guards at the Princeton University Art Museum, a custodian at the Lewis Arts complex, three members of the staff at Rockefeller-Mathey dining hall, a member of the staff at a local Mediterranean restaurant, an exhibition preparer at the Lewis Center, and two staff members — one current, one retired — from the athletics department. He depicts some of his subjects both in their work environment and in personal or leisure environments, communicating these individuals have a rich life and interests beyond their workplace role where the Princeton community typically sees them.

Moore was one of five Hodder Fellows for the 2018-19 academic year. Moore received a BFA in illustration from the College for Creative Studies (2009) and an MFA in painting from the Yale School of Art (2013). He has participated as an artist-in-residence at Knox College, The Fountainhead and the Josef and Anni Albers Foundation. His work has been exhibited at the Charles H. Wright Museum of African American History, N’Namdi Center for Contemporary Art, and Detroit Institute of Arts, and with the Smithsonian Institution. Moore’s solo exhibitions include Winston-Salem State University’s Diggs Gallery and the Urban Institute for Contemporary Arts. His work is included in the "Studio Visit Volume 31" (2015) and the Studio Museum in Harlem’s catalog, "Speaking of People: Ebony, Jet and Contemporary Art" (2014).