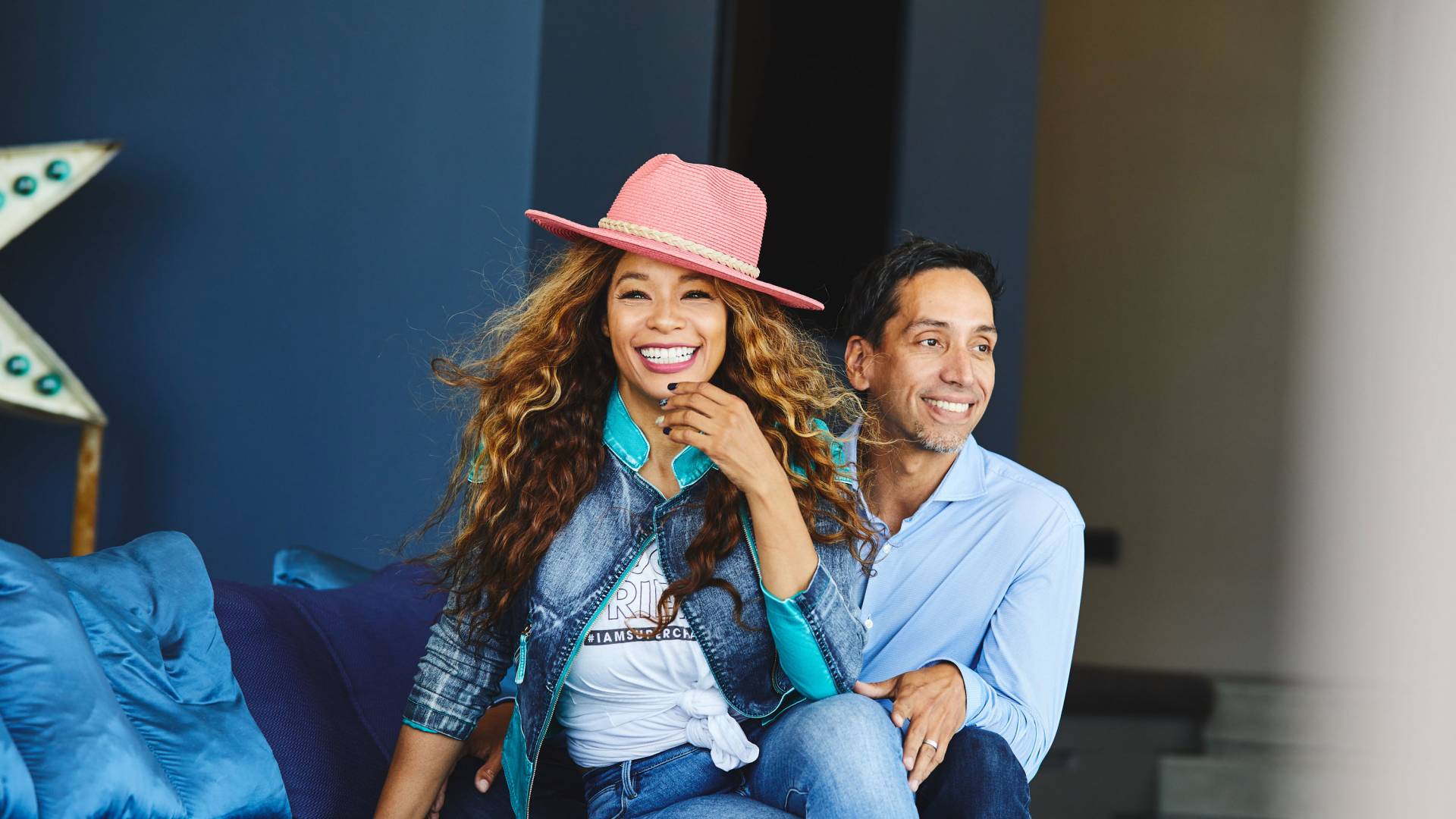 Largest gift to the University by Black and Latino donors expands ability of University to attract and support talented students from all backgrounds and highlights the promise of diversity, equity, inclusion and belonging for the larger community.

Kwanza Jones and José E. Feliciano have made a major gift to Princeton University, a $20 million contribution that is the largest gift to date by Black and Latino donors, and one of a few extraordinary alumni commitments to the University's strategic goal of undergraduate expansion, with the construction of two adjoining dormitories in one of the two new residential colleges being built at Princeton. In recognition of their philanthropy and leadership, the University will name two buildings in their honor. One of the dormitories will be named for Jones, a member of the Class of 1993, and the other will be named for her husband, Feliciano, a member of the Class of 1994. 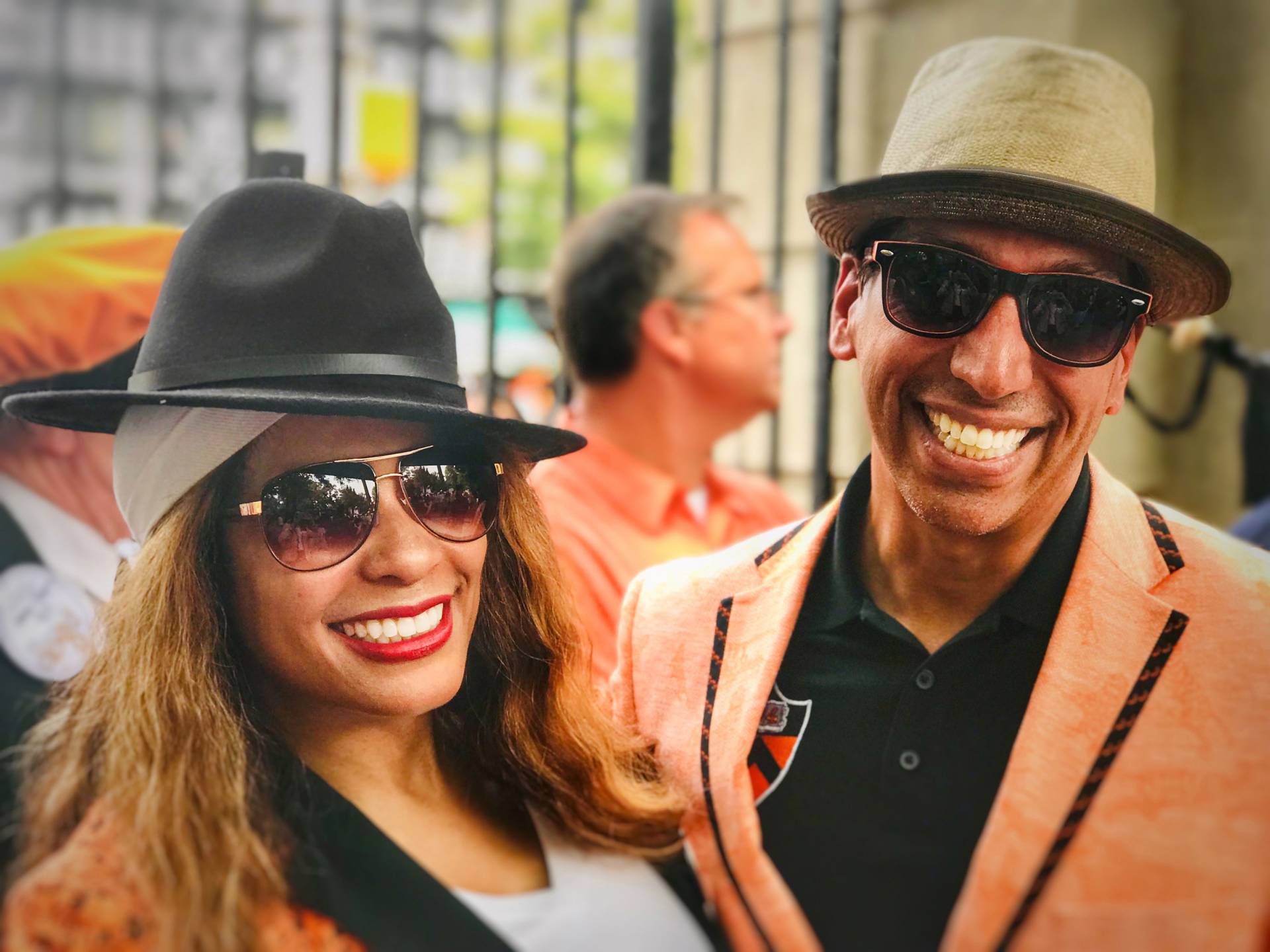 “Kwanza and José bring strong values and deep dedication to their philanthropy as well as their work as volunteer leaders on behalf of the University, and I am deeply grateful for their extraordinary commitment to Princeton,” said President Christopher L. Eisgruber ’83. “Their generosity makes possible new dormitories that are essential to Princeton’s future. Through their visionary gift, Kwanza and José are enabling us to increase the number of outstanding undergraduates we admit and to attract and support talented students from all backgrounds. In addition to supporting the expansion of the undergraduate population, which is among the University’s highest priorities, this historic gift from Kwanza and José diversifies Princeton’s institutional narrative in meaningful ways by weaving their names, identities and experiences into our shared campus tapestry. As we strive to make Princeton a fully inclusive community, we are fortunate to have their partnership.” 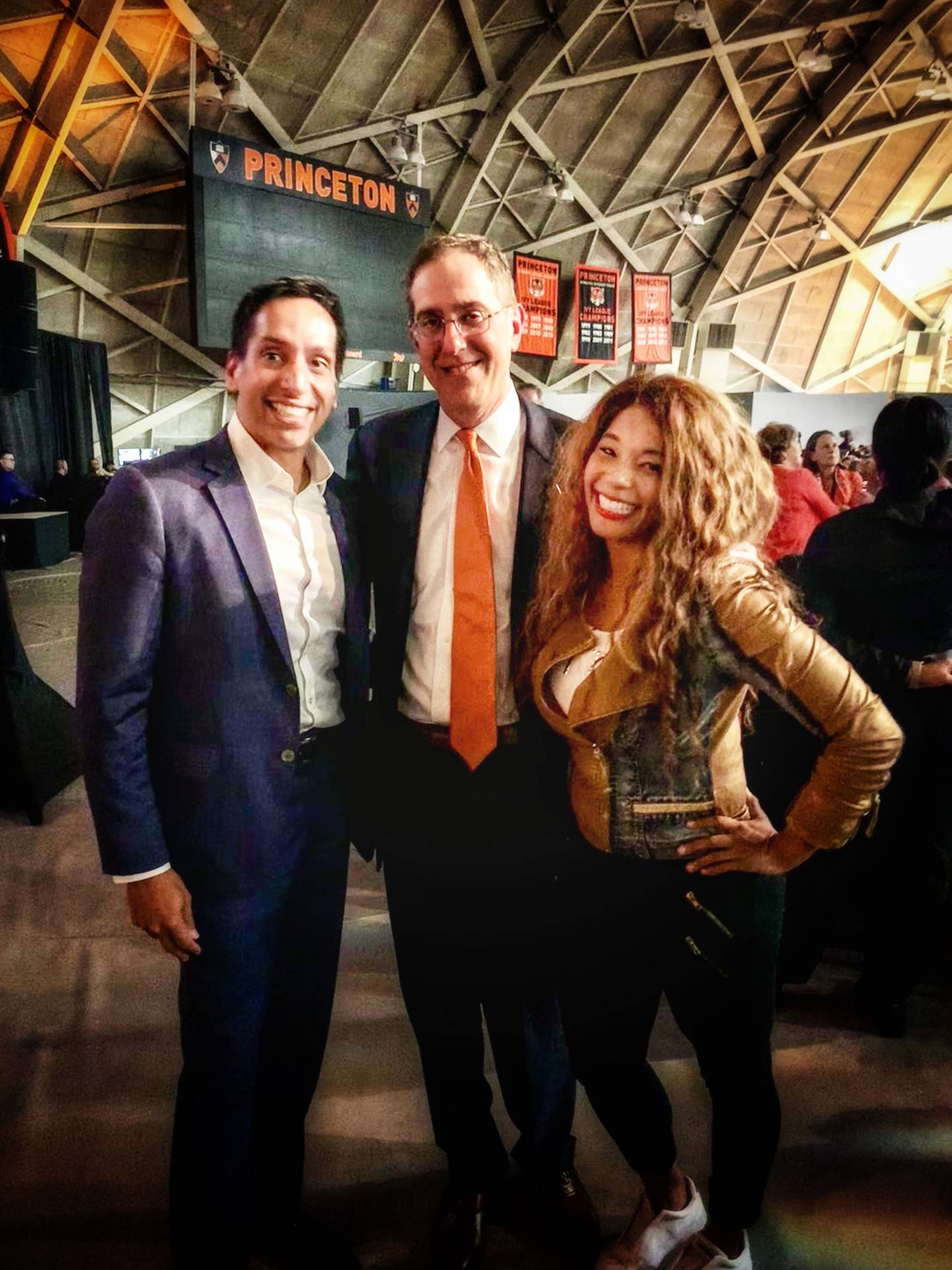 Kwanza Jones '93 and José E. Feliciano '94 with Princeton University President Christopher L. Eisgruber '83 at the She Roars alumnae conference in 2018.

The University began construction on the two colleges, located south of Poe Field and east of Elm Drive, earlier this year. The new residential colleges — which are scheduled to open in time for the 2022-23 academic year — will allow Princeton to expand the undergraduate student body by about 10% while also providing the flexibility so that other campus housing can be renovated or replaced. The addition of approximately 500 undergraduates will allow the University to admit more talented students who will realize the benefits of a Princeton education, enhance the diversity and vitality of the campus community, and contribute to society after their graduations.

“As Princeton nears its 275 years of existence, it’s difficult to imagine that there are many ‘firsts’ that remain. These buildings will be the first at Princeton named after Black and Latino benefactors,” Jones said, noting that she and Feliciano intentionally signed the gift agreement during the THRIVE conference, an event in 2019 that celebrated Princeton’s Black alumni. “This is a first we are humbled and honored by. A first that, to paraphrase Toni Morrison, helps us ensure that Princeton is — and institutions of higher education are — not just the place of the idea, but the idea of the place. And that idea represents progress and possibilities.

"Our idea of making a lasting impact was set in motion during our discussions with Princeton prior to attending Adelante,” Jones added, referring to the 2017 event that celebrated Princeton’s Latino alumni. “A few years later, José and I memorialized this gift at THRIVE, along with my sister and fellow Princeton alumna, Dr. Meta DuEwa Jones ’95. This was an immense source of pride for me, José, Meta and our families. It was progress and possibilities realized.

“We see this gift as the color of commitment. It celebrates the many contributions to Princeton’s legacy from its diverse students and alumni making a tremendous impact in the world,” she added. “It represents what it means for us to individually and collectively thrive. It demonstrates that people of color belong in the room and sit at the table as patrons and co-creators to help the University to continue to do the work of service to humanity. Most importantly, during this time of national reckoning on race and racial injustice, it highlights the benefits that diversity, inclusion and belonging can bring. Princeton is a microcosm of America; we’re modeling that working together makes us all stronger moving forward.”

Eisgruber wrote to the University community earlier this month about steps the University administration will take to make Princeton fully inclusive and to address systemic racism at Princeton and beyond.

“Kwanza and I are committed not only to continuing Princeton’s tradition of excellence in academia but also in making sure that we can make that available to more deserving students who represent a cross section of our society,” Feliciano said. “We both have the privilege of being Princeton graduates, thanks to the many sacrifices of our parents who recognized the value of education. We recognize that our Princeton education and network have had a fundamental impact on our career path and success. As such, we hope that our gift can be used to continue providing access to education and opportunity to many others, and we hope to inspire other alumni, including alumni of color, to give and be even more active stakeholders of the Princeton community.”

The University’s residential colleges play a major role in Princeton’s mission and distinctive educational model. Since the modern residence model was adopted in the 1980s, the colleges have served as the nexus of academic and non-academic life on campus, fostering environments where all members of a diverse community can engage with and learn from each other. The youngest of Princeton’s six current residential colleges, Whitman College, opened in 2007.

“Princeton students’ living/learning environments immerse them in our campus’s example of the true diversity of global life and culture,” said Jill Dolan, Dean of the College. “Their engagement with their fellow students’ broad range of perspectives in a close and warm community will equip them to lead us all into a bright and productive future. The dormitories named for Kwanza Jones and José E. Feliciano will, in a highly visible way, demonstrate the University’s commitment to enhancing diversity and inclusion, strengthen and facilitate belonging and community for all of our students and encourage them to see their residence halls as places not just to live but also to continue learning about themselves and one another. I am enormously grateful for Kwanza and José’s leadership and generosity in helping us to accelerate these efforts.” 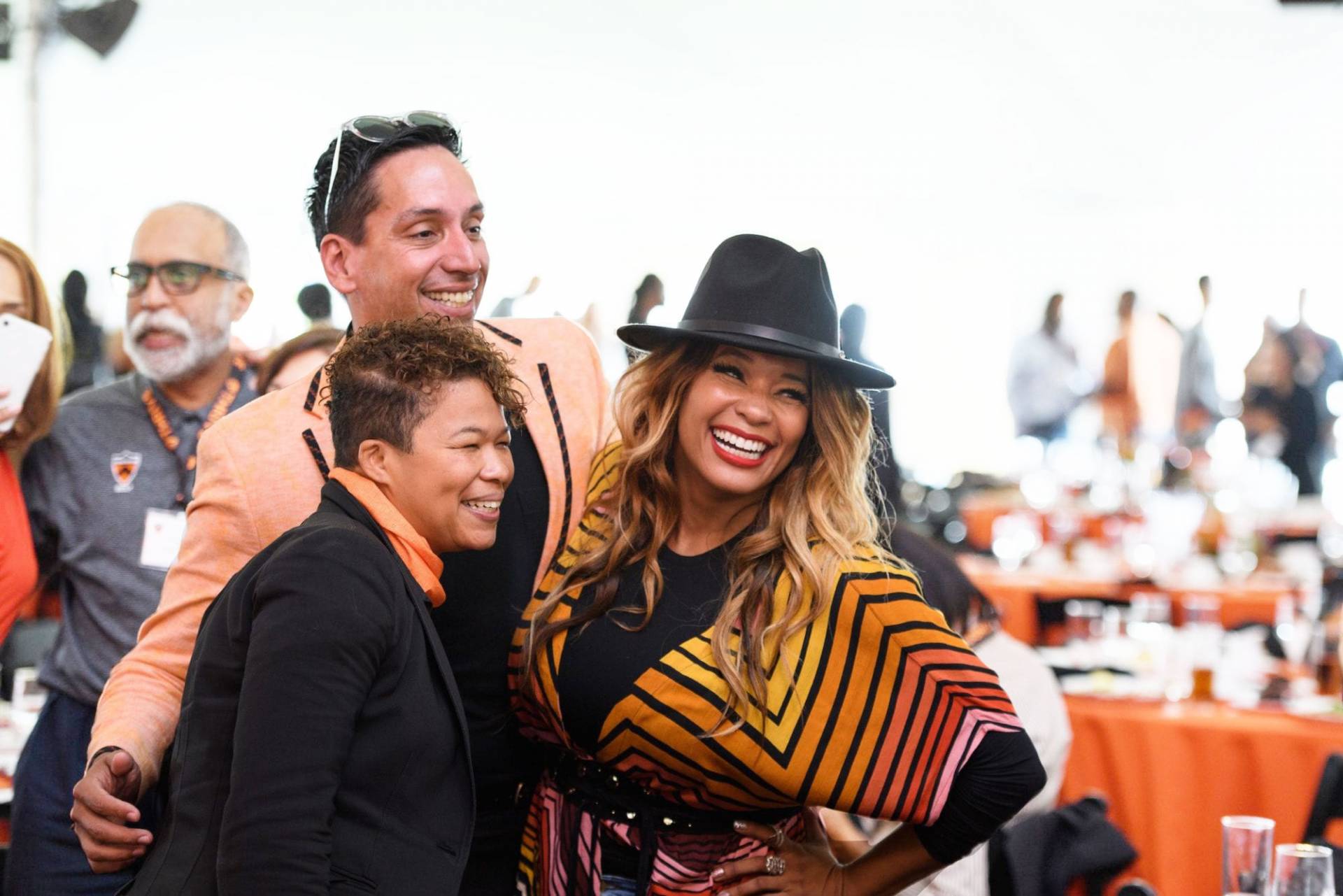 Jones is an artist, investor, lawyer and entrepreneur who founded SUPERCHARGED, a media company that specializes in self-development and hosts a community-driven platform connecting members to a new type of friend — one that boosts their knowledge, expands their network, and improves their life. She previously taught cross-cultural negotiations at New York University and was a mediator for the New York City Civil Court. She serves on numerous boards, including the board of directors for the Susan G. Komen organization and the board of trustees of Bennett College, a historically black liberal arts college for women. Jones also has recorded multiple music albums, with several of her songs hitting top ten on Billboard Magazine’s dance/electronic music charts.

Feliciano is the founder and a managing partner of Clearlake Capital Group, a private investment firm based in Santa Monica, California, that he co-founded in 2006. He previously worked at Goldman, Sachs & Co. and Tennenbaum Capital Group. He sits on numerous corporate boards, including serving as chairman of the board of directors for Janus International, Pretium Packaging, Unifrax International and Wheel Pros, as well as nonprofit boards, including the Robert Toigo Foundation and Robert F. Kennedy Human Rights organization.

In 2014, Jones and Feliciano co-founded the Kwanza Jones & José E. Feliciano SUPERCHARGED Initiative (KJSI), a high-impact philanthropic grant-making and investment organization. KJSI invests in people and entities that can make a lasting impact across four key areas: Education, Entrepreneurship, Equity and Empowerment. Among other notable commitments and donations, in 2019, Jones and Feliciano made a $1 million gift to Bennett College, an HBCU, from which Jones’ mother, aunt and other family members graduated. 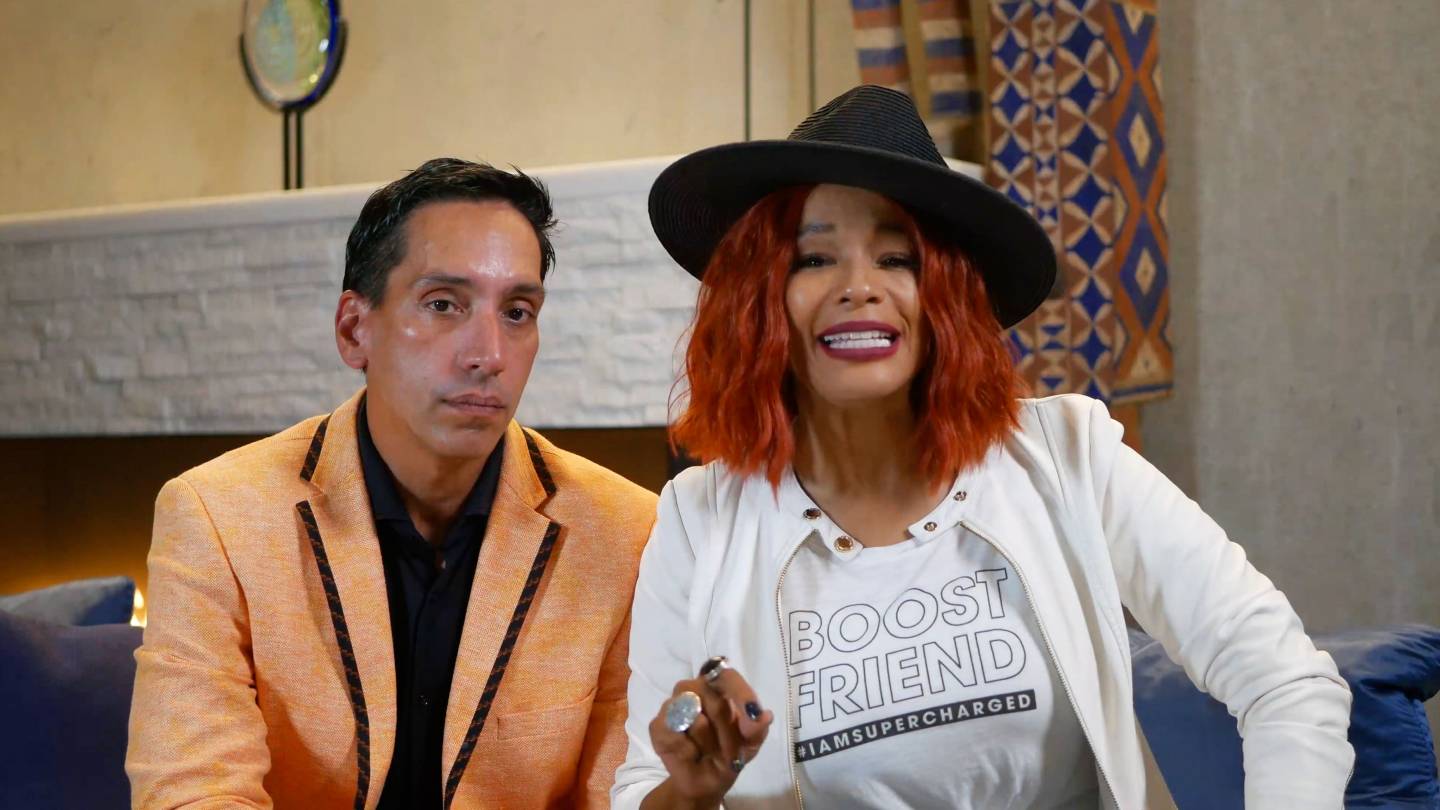 Alumni Kwanza Jones '93 and José E. Feliciano '94 discuss their motivations for supporting undergraduate expansion — to recognize Princeton’s role in their success, to extend that opportunity to more students, and to inspire other alumni to contribute to Princeton’s efforts around access and inclusion.

“Through KJSI, we are committed to powering possibilities and boosting humanity and its future,” Feliciano said. “As Cesar Chavez said, ‘We cannot seek achievement for ourselves and forget about progress and prosperity for our community ... Our ambitions must be broad enough to include the aspirations and needs of others, for their sake and for our own.’ This is particularly important now when minority communities are threatened by the combination of a health crisis as well as persistent economic and social inequities. Kwanza and I are determined to do our part.

“We are especially encouraged by the recent announcement by President Eisgruber and the University to continue making Princeton a more inclusive destination to all deserving students, including the commitment to collect data and report on the University’s progress in an annual Diversity, Equity, and Inclusion report,” he added. “We look forward to even more progress in the years ahead.”

“This really is a love story,” Jones and Feliciano said. “Now that our commitment to the University we love is public, we hope it is a catalyst for fellow alumni to join us in ensuring that Princeton represents the hope and promise of a better, more equitable and just tomorrow.” 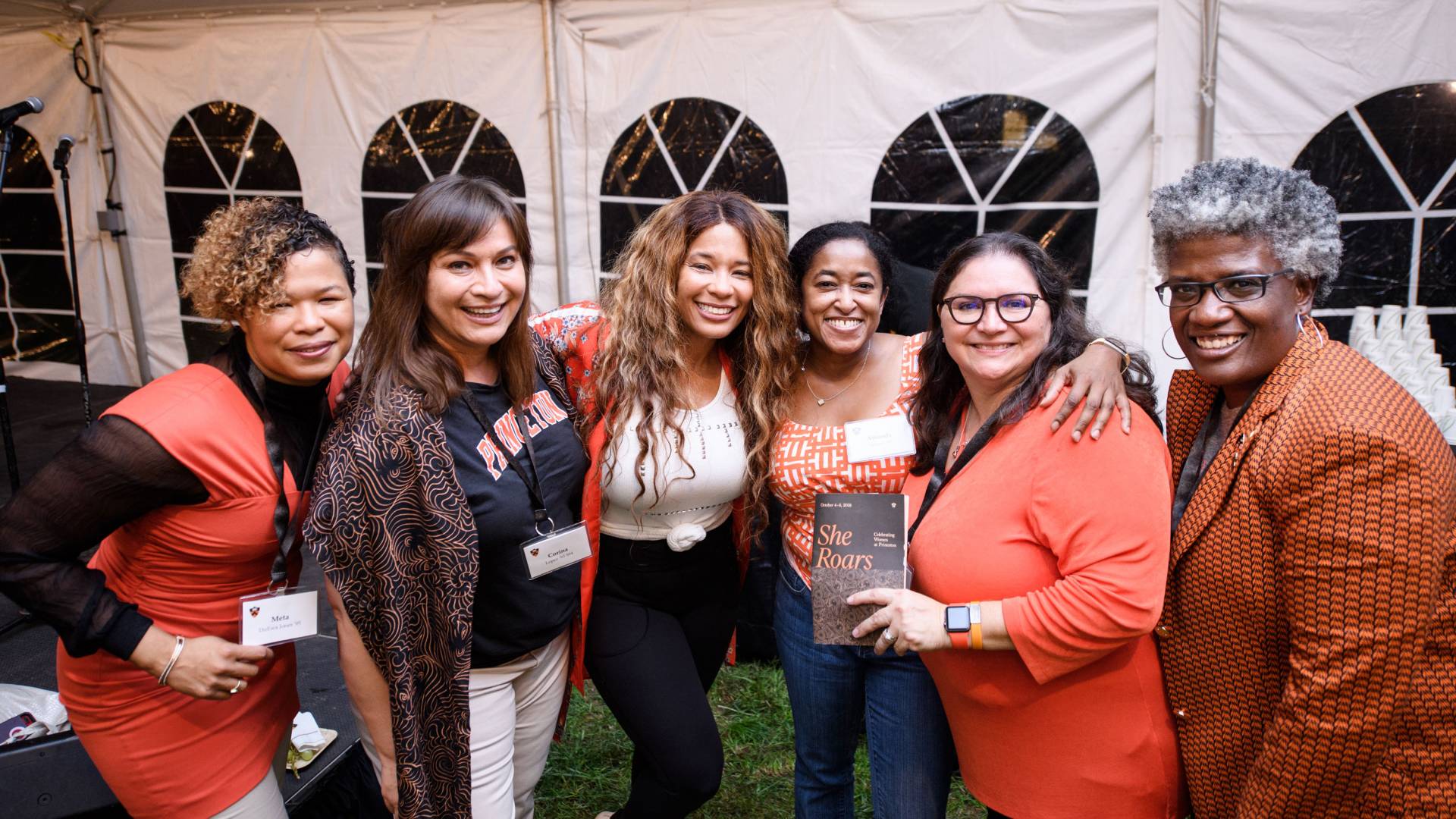 Kwanza Jones '93 (third from left) and sister Meta DuEwa Jones ’95 (left) with fellow alumnae at the Princeton University She Roars conference in 2018.