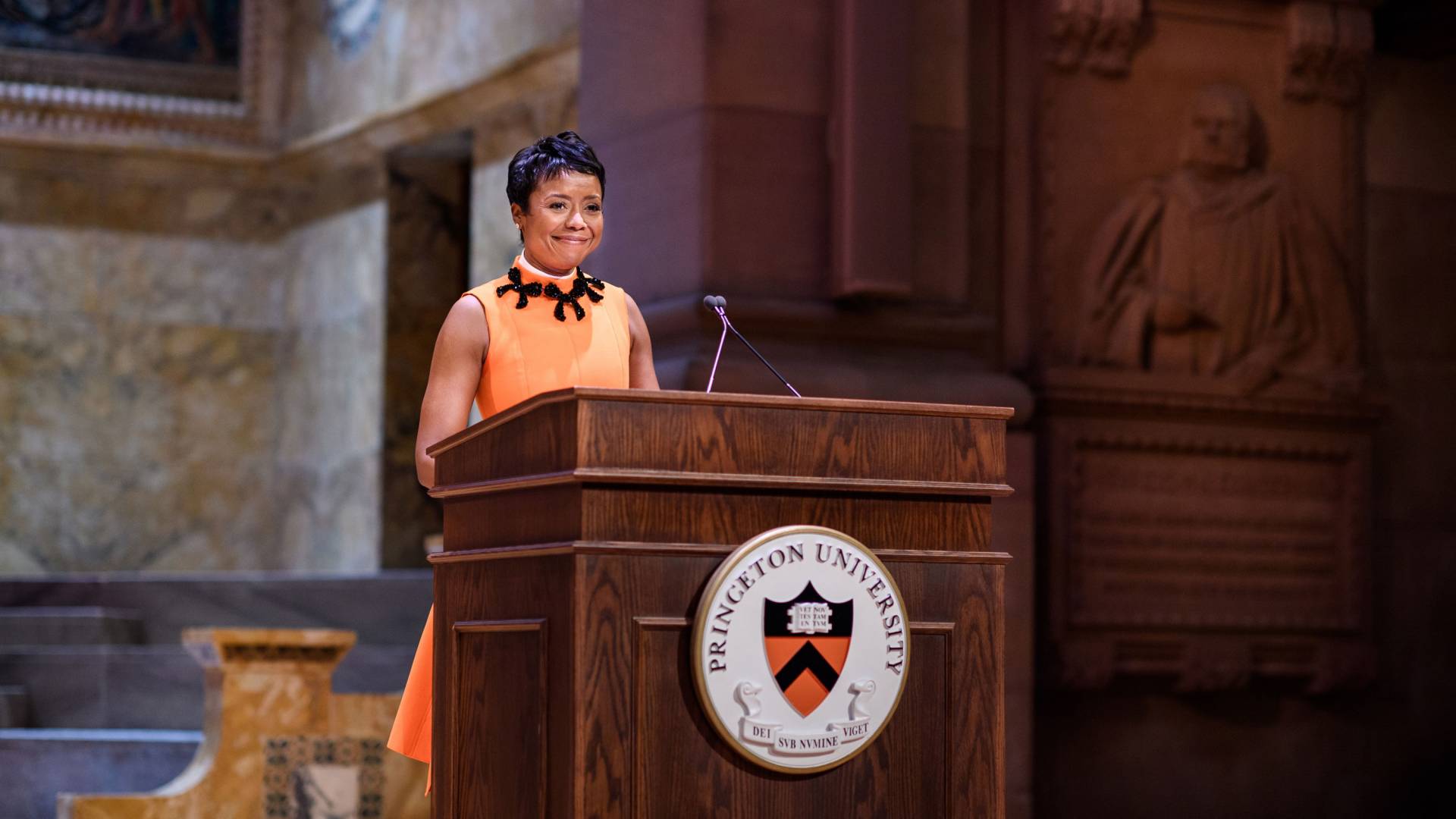 Mellody Hobson, Class of 1991, accepts the Woodrow Wilson Award during Alumni Day on Feb. 23, 2019. Hobson has made the lead gift to establish a new residential college at the site of Princeton University’s first residential college, formerly known as Wilson College. 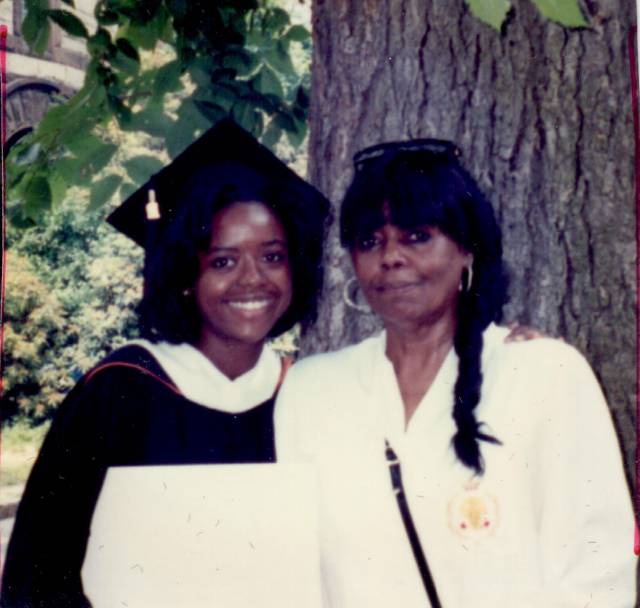 Hobson, with her mother, Dorothy Ashley, at Princeton Commencement in 1991.

“This extraordinary gift will be transformative for Princeton,” said President Christopher L. Eisgruber ’83, who began discussing the gift with Hobson last year. “It will enable us to improve the student experience at Princeton and to reimagine a central part of our campus, while also recognizing a remarkable woman who is a positive, powerful force for change in the world. Mellody Hobson is a wonderful role model for our students, and we are thrilled that her name will now grace our newest residential college. I am grateful to Mellody and the Hobson/Lucas Family Foundation for their generosity and their forward-thinking commitment to Princeton.”

“No one from my family had graduated from college when I arrived at Princeton from Chicago, and yet even as I looked up at buildings named after the likes of Rockefeller and Forbes, I felt at home,” said Hobson, who is co-CEO of Ariel Investments and a member of Princeton’s Class of 1991. “My hope is that my name will remind future generations of students — especially those who are Black and brown and the ‘firsts’ in their families — that they too belong. Renaming Wilson College is my very personal way of letting them know that our past does not have to be our future.” 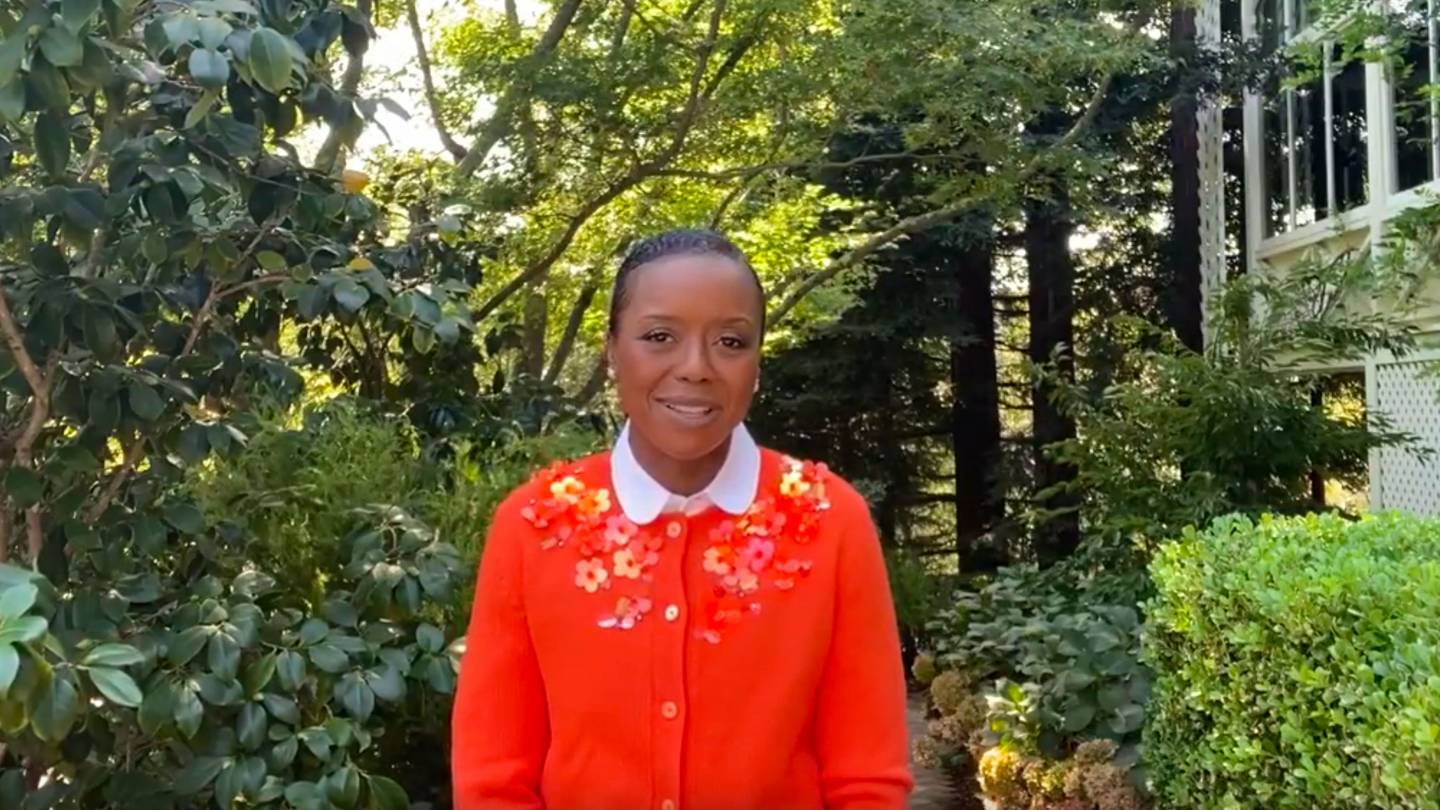 Hobson shares her thoughts about her historic gift to Princeton.

In June, the Board of Trustees voted to remove Woodrow Wilson’s name from the School of Public and International Affairs and Wilson College. While recognizing Wilson’s achievements and contributions to the University, the board determined that Wilson’s racist views and policies make him an inappropriate namesake for a school or a college whose scholars, students and alumni must stand against racism.

The residential colleges have helped define campus life since the early 1980s, and they remain essential to Princeton’s mission and distinctive educational model. The colleges — which currently include Butler, First, Forbes, Mathey, Rockefeller and Whitman — play a formative role in developing student identity, campus community, and a collegial and collaborative learning environment. 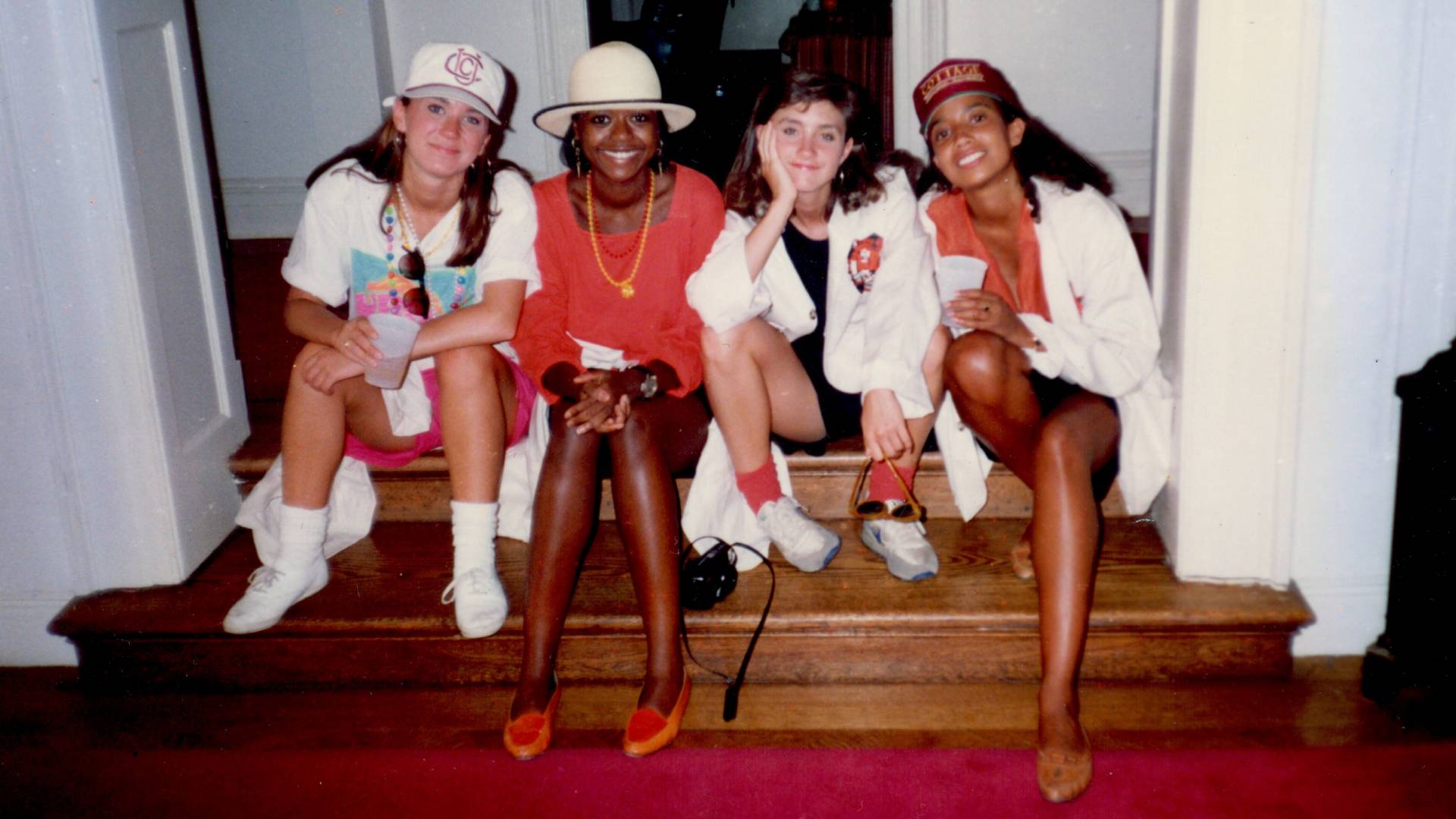 Hobson catches up with friends from the Class of 1991 at Reunions.

“Along with class year, their residential college affiliation is one of the most significant identifiers for Princeton students,” said Jill Dolan, dean of the college. “That future students will be able to say, ‘Meet you at Hobson,’ and that Hobson will be a proud part of our annual ‘Clash of the Colleges’ competition during first-year orientation will transform our future students’ experiences.”

The University’s strategic framework, adopted by the board in 2016, called for the expansion of the undergraduate student body by 500 students — an increase of approximately 10 percent. This enrollment increase, paired with Princeton's nationally recognized, need-blind financial aid program, will ensure that more talented students from all backgrounds and sectors of society have access to a Princeton education.

“Everyone deserves access to the best education, and Princeton is leading the way to make sure higher education better reflects our society as a whole,” said Hobson, a Princeton trustee from 2002 to 2006. “I was so proud to serve on the board when the University developed its generous ‘no-loan’ financial aid program. By inviting more students from a variety of backgrounds to attend and contribute, we are not only building a better University community, we’re helping create a better world.” 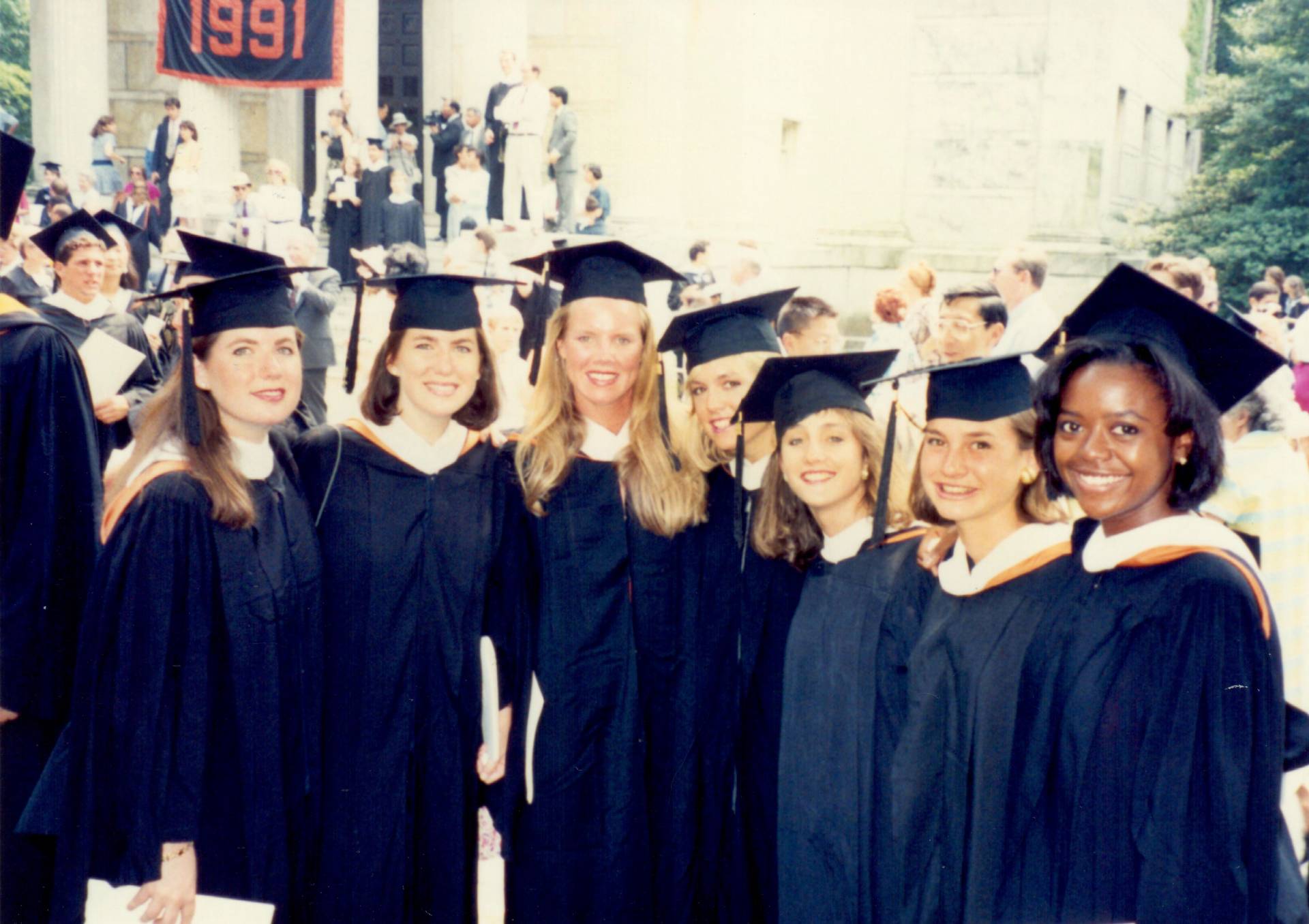 Hobson, who graduated with a degree from the School of Public and International Affairs, formerly named for Woodrow Wilson, celebrates with classmates at Commencement.

Hobson’s storied career as co-CEO of Ariel Investments began with a summer internship in 1989. She also serves as chair of the board of trustees of the Ariel Investment Trust — the company’s publicly traded mutual funds — and serves on the boards of Starbucks and JPMorgan Chase. Previously, she served as a director of Estée Lauder and board chair of DreamWorks Animation SKG.

Her commitment to service includes her role as chair of After School Matters, a Chicago nonprofit providing thousands of inner-city teens with after-school enrichment programs and summer jobs. She and her husband, George Lucas, were awarded the Carnegie Medal of Philanthropy in 2019. “Our shared passion is education and its power to transform lives — as it did ours,” said Hobson.

Together, they co-chair the Lucas Museum of Narrative Art. She is also a board member of the George Lucas Education Foundation.

Additionally, Hobson is vice chair of World Business Chicago, a board member of the Economic Club of Chicago, the Los Angeles County Museum of Art and Bloomberg Philanthropies. She is also a trustee at the Rockefeller Foundation.

A nationally recognized voice on financial literacy and investor education, Hobson has appeared as a contributor and analyst for CBS and ABC news programs. She speaks passionately about diversity in corporate boardrooms. In 2015, Time Magazine named Hobson one of the “100 Most Influential People” in the world. 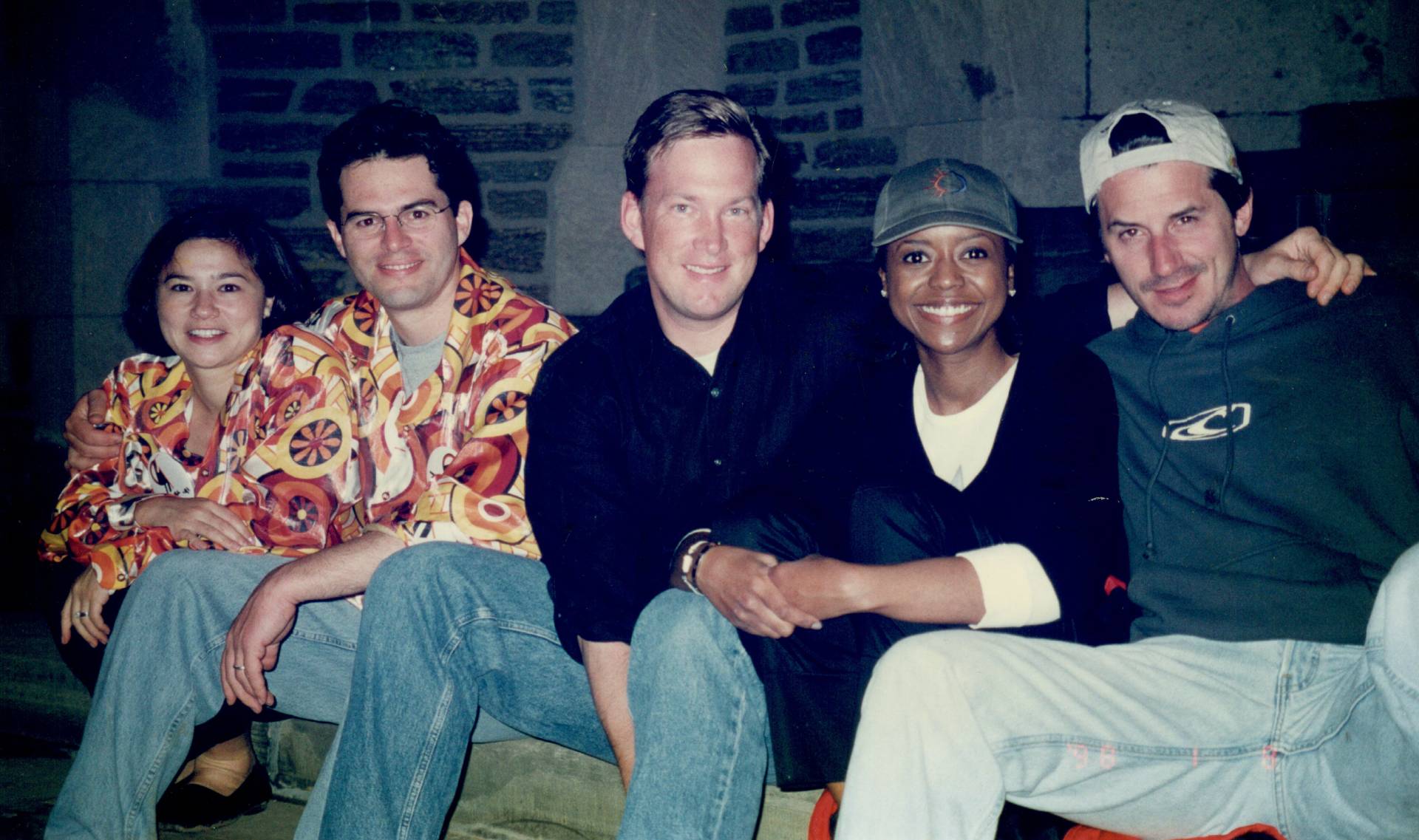 Hobson with friends at Reunions.