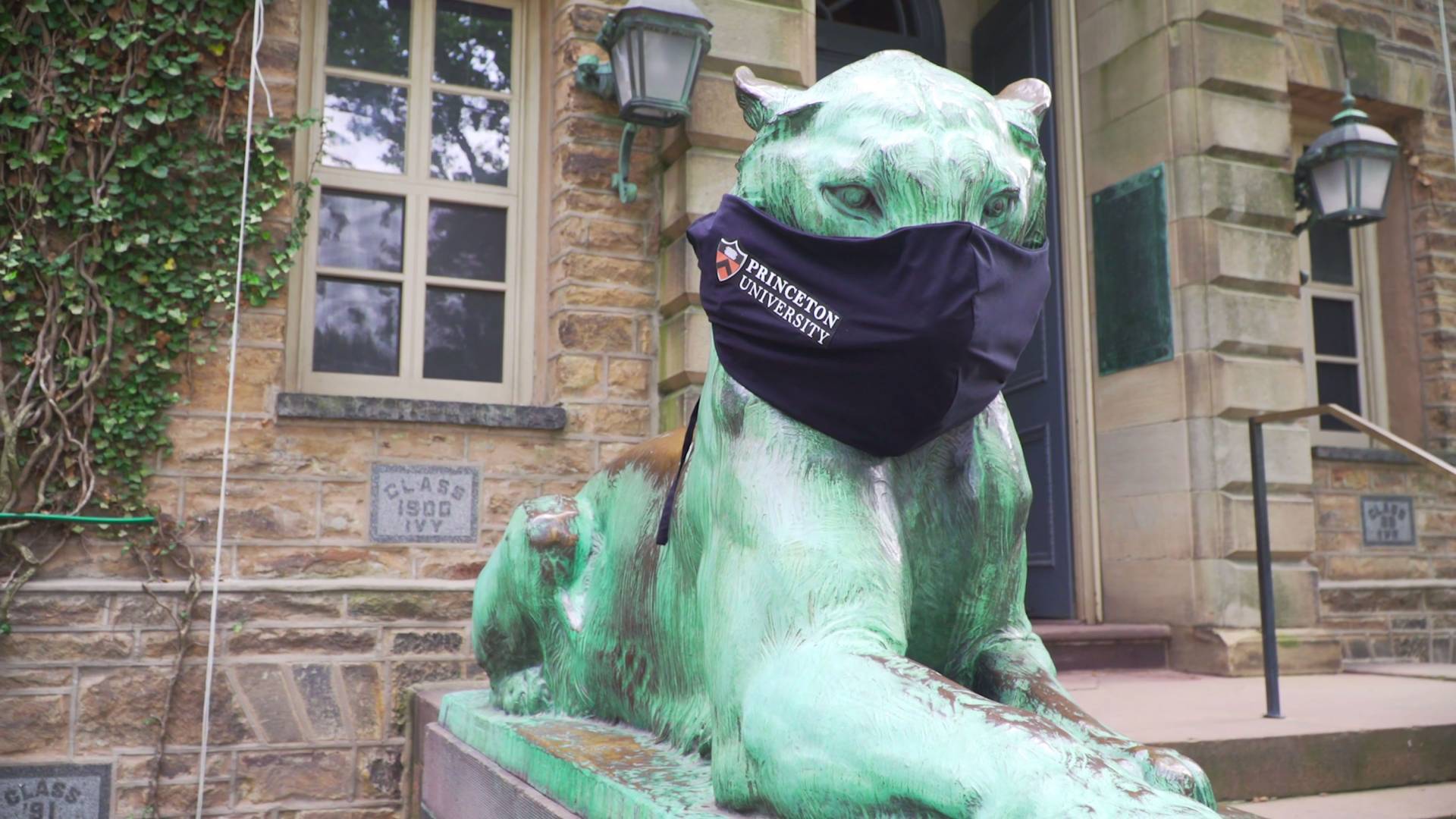 From coronavirus to the environment, social justice to civic engagement, Princetonians rallied to make 2020 a year of purpose and achievement.

Video by
The Office of Communications

Princetonians demonstrated incredible resilience in the face of the COVID-19 pandemic — fighting the virus, pushing forward academically and growing stronger as a community, as shown in the year-in-review video above.

The video features the song “I won’t sleep soundly,” written by first-year student Molly Trueman after attending a Black Lives Matter rally in June, and arranged and performed by Trueman and the Princeton University Glee Club.

The year began with a drumbeat of academic and co-curricular events. Students returned from winter recess, taking final exams in January for the last time before a change in the academic calendar, and then participated in Wintersession classes, and then the start of the spring term. Maya Lin’s new public art commissions at the Lewis Arts complex gracefully connected art to the environment and landscape. At the Princeton University Library, scholars pored over T.S. Eliot’s letters, which had been unsealed after 60 years.

Adapting to COVID-19 while continuing to learn and connect

Soon, however, the world began to turn its attention to COVID-19, and in early March, the University suspended undergraduate education on campus, while most staff and faculty transitioned to work from home.

As President Christopher L. Eisgruber would later say in a podcast: “It was a day when most of the students had to pack up and leave. It was a day where a lot of the seniors recognized that it was the last day they would have on campus as part of their Princeton education. All of us as Princetonians recognize just how special the place is, and how special those experiences and memories are of the place. … In retrospect, we did the right thing. It was the right thing to do. But boy, it was a tough decision to make at the time we made it.”

All members of the University community worked to adapt to the new virtual environment for learning, and to help others dealing with difficulties related to health, economics, education and more. Hundreds of faculty members adapted their courses for a virtual environment, including John McPhee, a Ferris Professor of Journalism in Residence and a Pulitzer Prize-winning author, who had taught “Creative Nonfiction” on campus for the last 45 years.

The spring term ended with old traditions celebrated in new ways, including a virtual P-rade to cap a virtual Reunions, and virtual Hooding and Commencement ceremonies, including addresses by the president, Princeton’s first black valedictorian Nicholas Johnson, and 1986 alumna and journalist Maria Ressa. The fall term opened with a virtual Orientation, with members of the Class of 2024 hearing a welcome address from the president, engaging with author Jill Lepore on the Pre-read book “This America” and being introduced to Step Sing by older classmates and alumni.

At the same time, some researchers refocused their work to design and produce ventilators and personal protective equipment; to understand the science of superspreaders and transmission through the air; and to compare the disproportionate economic impacts of shutdowns on Black Americans. Other researchers pushed forward with innovation aimed at bringing a positive impact to society in different realms, as highlighted during the November Engage 2020 conference, which featured speakers such as Microsoft president and 1981 alumnus Brad Smith and Princeton’s new dean for the School of Engineering and Applied Science, Andrea Goldsmith. The University’s “A Year of Forward Thinking” engagement campaign invited Princetonians and others to join in a conversation focused on responding to the challenges facing the nation and the world.

Students and faculty received major recognition outside the University as well, with senior Sophie Li winning a Rhodes scholarship, senior Kiara “Kiki” Gilbert being awarded a Marshall Scholarship, and four seniors were named Schwarzman Scholars. In addition, Associate Professor of Chemistry Mohammad Seyedsayamdost receiving a MacArthur Fellowship, and Dean Cecilia Rouse being named as the presumptive nominee as chair of the Council of Economic Advisers for U.S. President-Elect Joe Biden.

Princetonians sought community through events on and off campus, such as talks and exhibitions through the Princeton University Art Museum, and photo and video projects about the campus locations that hold special meaning for them. And many students and alumni pointed their talents and time to assisting others, as seen in the #TigersHelping campaign and the “We Roar” podcast. During the summer and fall, students and faculty also became very engaged in the U.S. elections, with students volunteering to become poll workers and encouraging each other to register to vote, and faculty commenting on topics ranging from presidential debates to election results.

Throughout, staff members focused on supporting the academic and research operations, while making the campus safe for those who remained and in anticipation of welcoming everyone back as soon as it was safe to do so, from starting a Campus Advocates health program to establishing its own COVID testing lab. And the campus mourned and remembered those who lost their lives to the virus.

After the unjust killings across the country of Ahmaud Arbery, Rayshard Brooks, George Floyd, Breonna Taylor and other people of color in the spring, Princetonians were inspired to protest and create meaningful change. President Eisgruber charged the cabinet to explore how the University could more effectively fight racism. The University trustees removed Woodrow Wilson’s name from the School of Public and International Affairs and Wilson College (renamed First College), concluding that his “racist thinking and policies make him an inappropriate namesake for a school or college whose scholars, students, and alumni must stand firmly against racism in all its form.” A number of initiatives to address systemic racism have been identified in the months since, including expanding educational programs to underserved populations; diversify the faculty and faculty pipeline, as well other populations on campus and its vendors; and improving benefits for employees who may have been disproportionally affected by systemic racism or other class-based disadvantages.

Significant alumni gifts from Jose Feliciano and Kwanza Jones for two new dormitories and from Mellody Hobson for a new residential college are supporting the University’s strategic goal of undergraduate expansion while diversifying the individuals whose names adorn campus buildings. The University also established a trustee-led Committee on Principles to Govern Renaming and Changes to Campus Iconography.

In other efforts to make the University more inclusive, Princeton welcomed the Supreme Court’s ruling restoring DACA, after a three-year federal lawsuit filed with Microsoft and alumna Maria Perales Sanchez. Eric Schmidt, a 1976 alumnus, and his wife, Wendy Schmidt, endowed a new professorship of Indigenous studies, which expands interdisciplinary research and teaching focused on Indigenous communities around the world.

In the classroom, on the airwaves, in labs and from their homes, Princetonians continued to lead in environmental studies. Faculty members looked back at 50 years of environmental research at Princeton, dating to the early days of the environmental movement. On the 50th anniversary of Earth Day in April, students in the class “Investigating an Ethos of Sustainability at Princeton” shared the sights and sounds of their silent spring at home.

In a major new “Net-Zero America” study, Princeton researchers outlines five distinct technological pathways for the United States to decarbonize its entire economy. The massive, nationwide effort would allow the United States to reach net-zero emissions of greenhouse gases by 2050 using existing technology and at costs aligned with historical spending on energy; the interim report and additional environmental research can be viewed on the Princeton Environmental Research website.

Despite all of the challenges and obstacles of 2020, Princetonians’ innovation, creativity and care for one another brought the community closer together. We look forward to a 2021 that sees more Princetonians back on campus to pursue teaching, research and service.