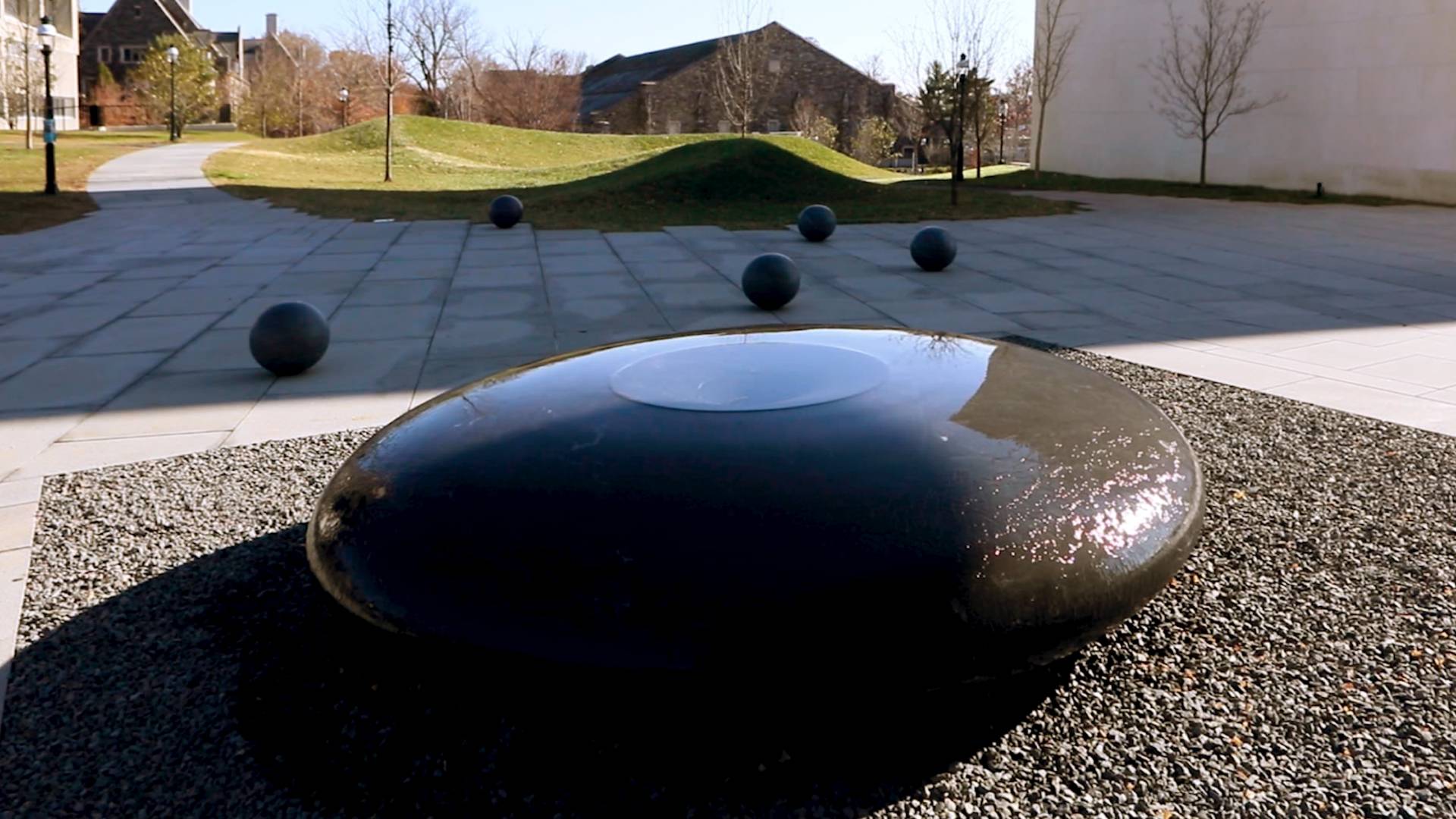 By her own admission, artist Maya Lin is still playing in her childhood backyard.

“My voice [as an artist] has been rooted in my childhood,” Lin told a packed audience in Richardson Auditorium at Princeton on Nov. 5. She was on campus to celebrate the completion of two major public art commissions for the University.

“I grew up in this house surrounded by woods and a very hilly southeastern Ohio terrain,” she said. “There were three different hills with three different streams — that was my playground. Every day after school, I’d be out there with my brother playing in nature. I still think I’m in that landscape.” 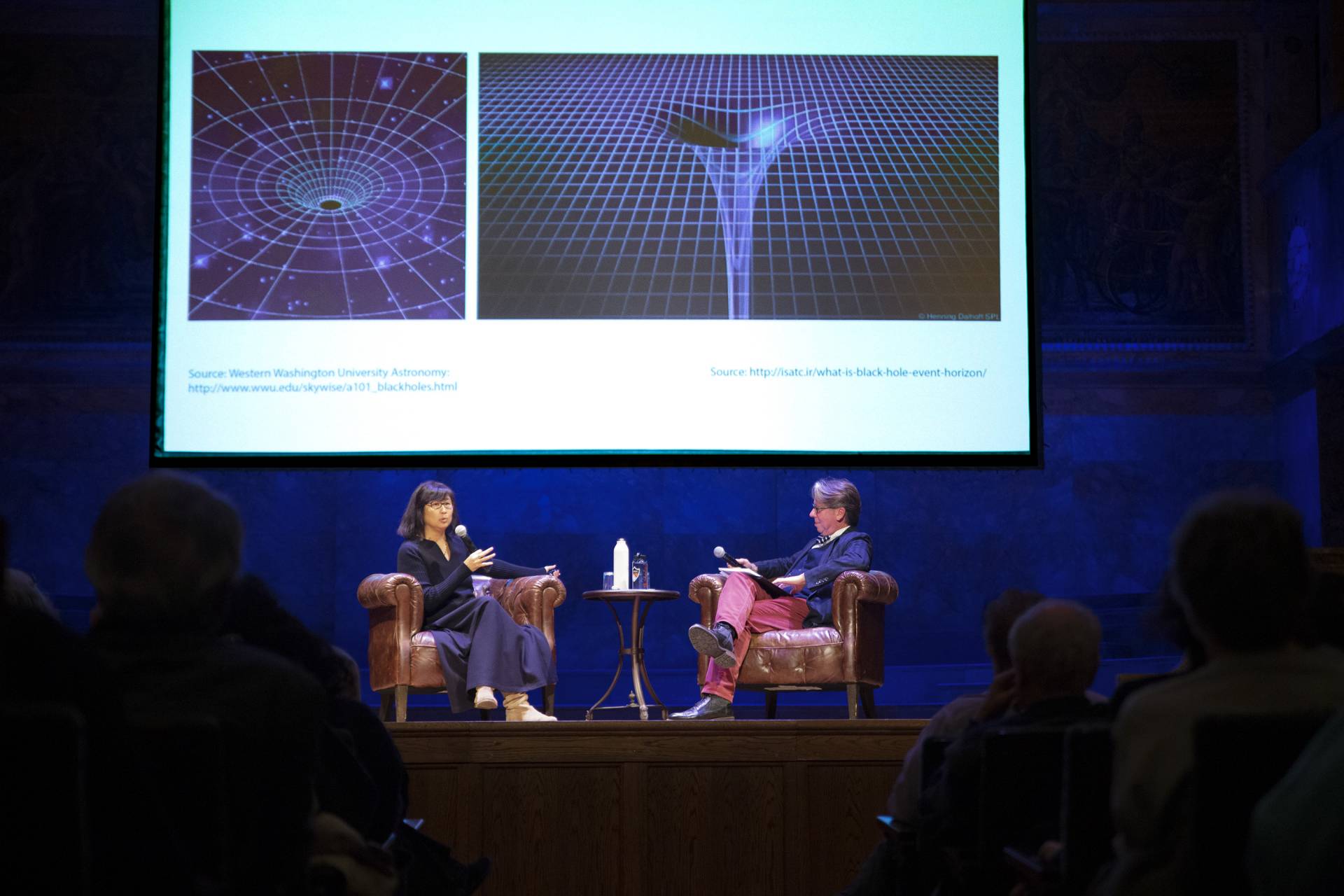 Lin described her artistic process at a Nov. 5 public talk in Richardson Auditorium with James Steward, the Nancy A. Nasher–David J. Haemisegger, Class of 1976, Director of the Princeton University Art Museum. She said "Einstein's Table" is an homage to former Princeton resident Albert Einstein and his theory of general relativity, which predicted many features of the universe, including black holes.

Lin held a public conversation with James Steward, the Nancy A. Nasher–David J. Haemisegger, Class of 1976, Director of the Princeton University Art Museum. In his introductory remarks, Steward said, “Maya has emerged as one of the great designers of our time.”

Lin’s two new works use site-specific art to connect with the natural world.

“The Princeton Line” — an undulating sculpted line of molded earth that travels a steep, grassy slope — was installed near the western edge of the campus in 2018. The work takes its name from the train line that once extended to the site where the Lewis Arts complex now stands and is part of Lin’s series of “Earth Drawings.” 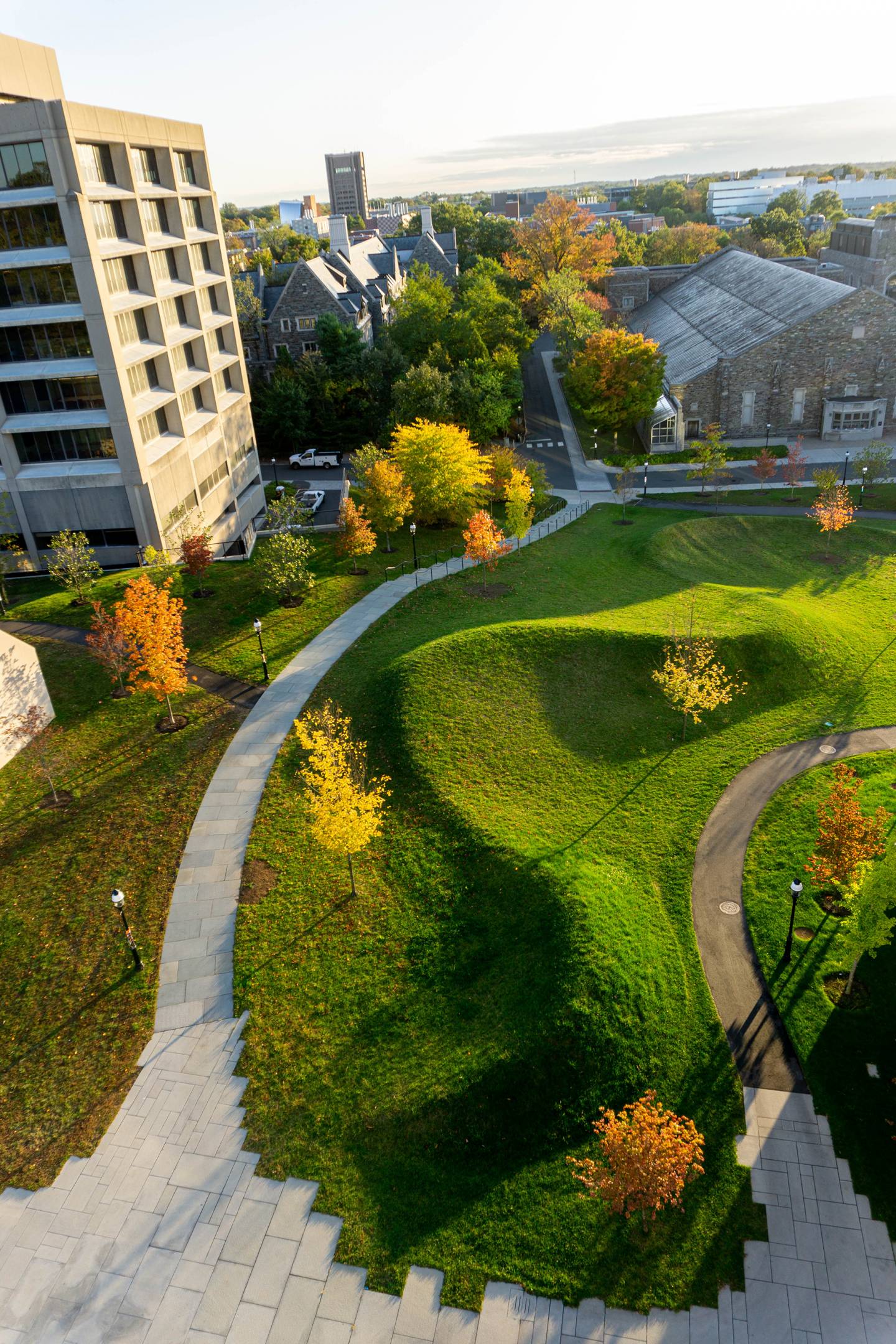 “The Princeton Line” — an undulating sculpted line of molded earth that travels a steep, grassy slope — takes its name from the train line that once extended to the site where the Lewis Arts complex now stands and is part of Lin’s series of “Earth Drawings.”

“Einstein’s Table” — an 11-foot-diameter granite “water table” — was completed this year, and is adjacent to the top edge of “The Princeton Line.” The elliptical table, surrounded by seven spheres, recalls drawings of the Earth’s orbit around the sun. The work is an homage to former Princeton resident Albert Einstein and his theory of general relativity, which predicted many features of the universe, including black holes.

Lin achieved international recognition as an undergraduate at Yale University, when her design for the Vietnam Veterans Memorial in Washington, D.C., was chosen in a national competition. Her body of work includes what she has described as her last memorial, the web-based “What is Missing?,” raising awareness of biodiversity loss to climate change, and site-based outdoor work around the world, including “Wave Field” at Storm King Art Center in upstate New York.

Steward began the conversation by noting how Lin’s artworks are “inextricably connected to our relationship with nature. They ask the viewer to reconsider nature and the environment at a time when frankly it is necessary to do this.”

“I’ve always been drawn to a very still use of water,” Lin said. “I’m in love with things that aren’t what you think they’re going to be. I want to ‘still’ the water down until it’s barely moving, and then you engage with the piece. Water has a propensity to be both very powerful and extremely calm. I love the fact that you have a language and materiality that can transform itself completely.”

Steward noted “the graceful quiet with which the water moves across the surface” of “Einstein’s Table.” “There’s a kind of magic to how the water clings to the rock,” he said.

“Most people want the splash and sound [of water],” Lin said. “For me, it’s how slow can we make it?”

Steward asked about Lin’s artistic process for her “Earth Drawings” series, which includes hundreds of drawings and clay models, typically sculpted and shaped by Lin herself. Once she’s on site, Lin said she sculpts the physical earth, adjusting until the very end. “When your medium is the earth, you absolutely have to feel it through in full scale.” Smiling, she told the audience that she has to work with bulldozer operators who have a good sense of humor and a lot of patience.

Steward said Lin’s works at Princeton were the culmination of a 10-year effort to add work by Lin to the University’s growing public art collection. The commissions were announced in 2017, just prior to the opening celebration of the Lewis Arts complex. 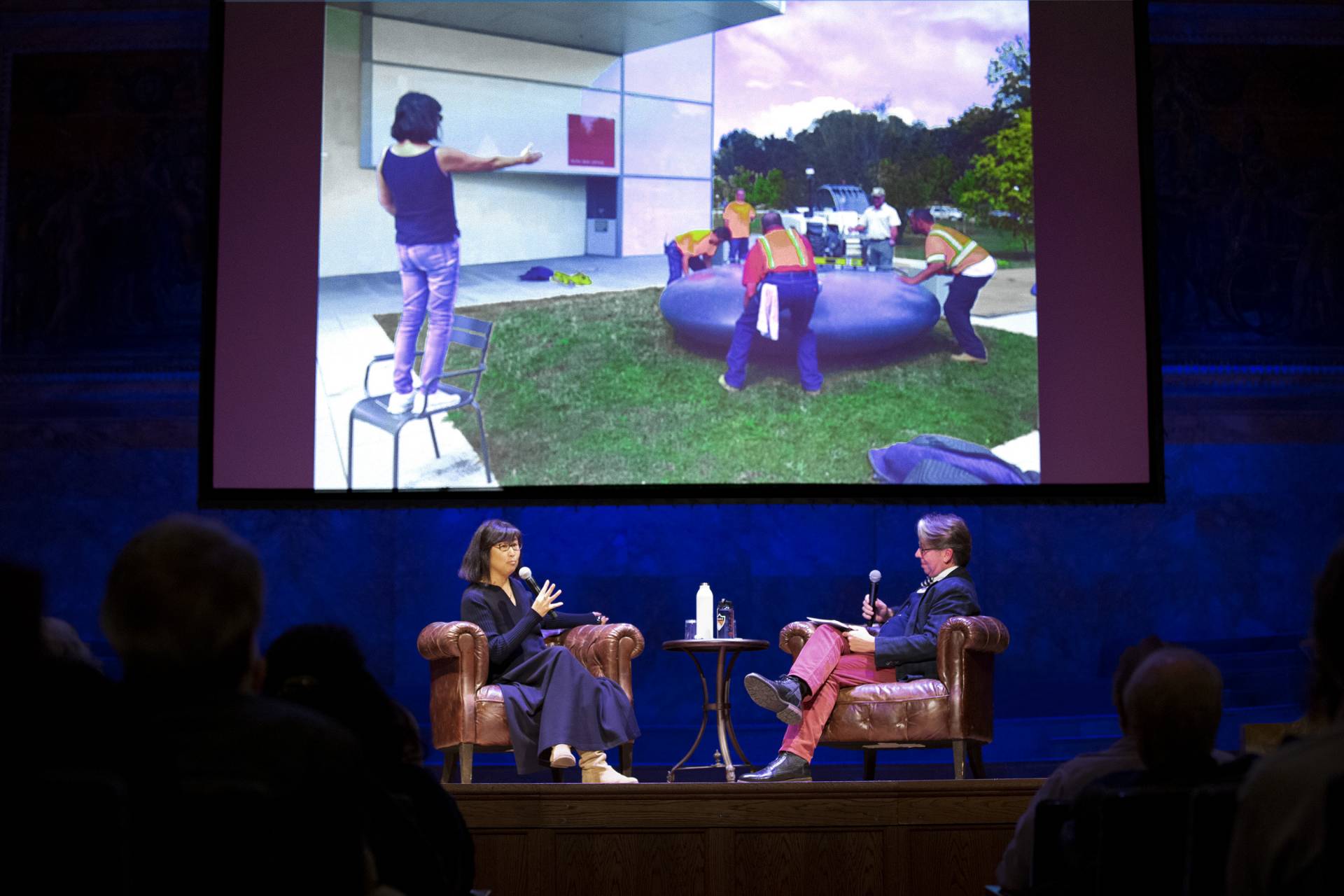 During the public conversation, Steward asked why water is an enduring feature in Lin’s artwork. As a photo of her taken during the installation process was shown on the screen, she said: "Water has a propensity to be both very powerful and extremely calm. ... Most people want the splash and sound [of water]. For me, it’s how slow can we make it?”

Lin was already familiar with the campus: “Public Table” by Scott Burton, an iconic outdoor sculpture situated between East Pyne and Murray-Dodge halls, was the inspiration for the first work in her water table series, the Civil Rights Memorial in Montgomery, Alabama, built in 1989. On one of her early campus visits, Steward drew her attention to the site to the west of Baker Rink, noting that it was to form the edge of the planned Lewis Arts complex. The steepness of the slope caught her attention. “My brain went right to that odd hill,” Lin said.

“’The Princeton Line’ is celebrating that incredible hill, inviting you to experience that hill in a different way — very nonverbal — to experience the land through your feet, not through what you’re thinking,” she said.

Lin, who was awarded a 2016 Presidential Medal of Freedom from President Barack Obama, is known for her commitment to sustainability, including her choice of grass and soil mix to create a healthy “soil biome” for her earthworks, and using as much of the existing soil and rocks on-site as possible.

The jet mist stone for the water table and bollards was sourced from a quarry in Culpeper, Virginia. Test cuts to see how the stone would behave with a curved cut revealed subtle white striation with “a galaxy feel,” Lin said.

Noting Lin’s work as both artist and environmental activist, Steward asked, “Are there two or three things you would invite everyone in this room to do to fight climate change?”

“Reduce your own impact by changing your diet and reducing your energy usage,” said Lin, “[There are] so many different ways to do it: winterizing your house, that’s a big one; LED lights, hugely important; add some solar panels.” For sustainable eating tips, she recommended 1999 Princeton alumnus Jonathan Safron Foer’s new book, “We Are the Weather: Saving the Planet Begins at Breakfast.”

Lin also emphasized the importance of community and political engagement.

“We have to vote for the people that believe and are doing something about climate change, as well as modify our behavior and discuss it,” she said. “This is a very hard topic to solve because we all have to be part of the solution. Get out there and talk about it. More Americans know climate change is happening, they know we’re causing it and they care, no matter what we’re reading. Don’t forget that.”

Lin said she wants to raise awareness of nature-based solutions such as reforming agricultural practices. She described several strategies, including carbon sequestration, a method to reduce the amount of carbon dioxide in the atmosphere; supporting organic and no-till farming techniques; and growing water-intensive crops like rice away from areas that are threatened by drought.

“We can adapt and we can rethink. With computers and technology, we have the means to shift resiliency planning, but we have to move,” Lin said.

“The kind of public art you make is a part of this process,” Steward said. “You’re asking us to contemplate the natural world. You don’t make public art that is easy, you invite us to stop and slow down and engage in something I’m very passionate about: close and sustained looking.”

Lin told the audience her next installation, “Ghost Forest,” is designed to remind the viewer about the impact of climate change. The grove of spectral trees — constructed from dead trees from the Pine Barrens in New Jersey — will be on view June 8-Dec. 13, 2020, in New York City’s Madison Square Park.

Before bringing the discussion to a close, Steward asked, “What last advice would you give to folks about engaging with ‘The Princeton Line’ and ‘Einstein’s Table’?”

“With ‘Einstein’s Table,’ it’s ‘slow down,’” Lin said. “With ‘The Princeton Line,’ it’s ‘get to know what’s right underfoot, understand what’s going on in your community.”