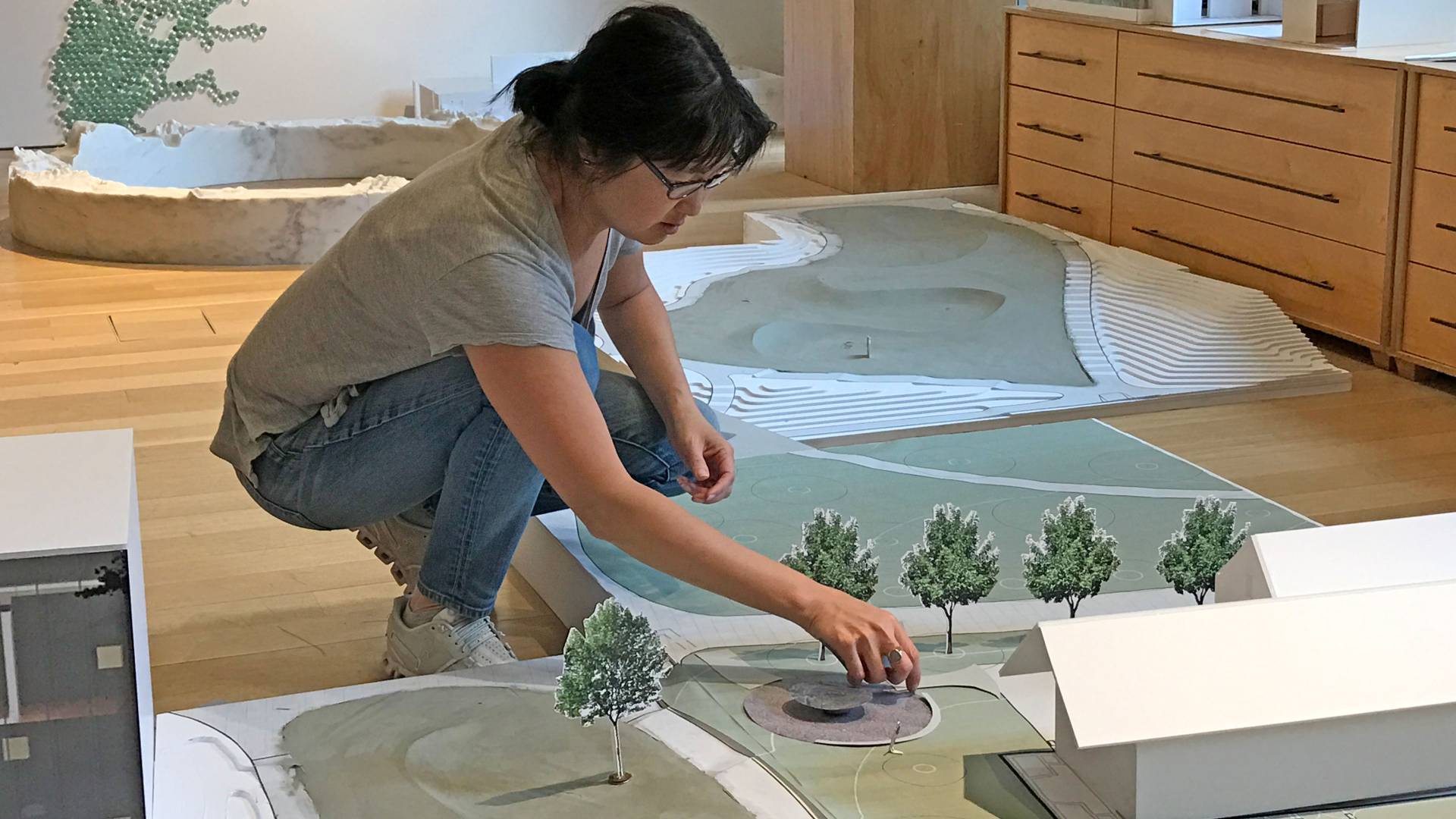 Maya Lin works in her studio with an early model of "The Princeton Line" earthwork, now being installed on the Princeton campus.

Work on the outdoor installation on Princeton’s campus by internationally acclaimed artist Maya Lin is underway. Installation of the earthwork — titled "The Princeton Line" — began in April on the slope that extends from the new Lewis Arts complex toward Baker Green. The first phase is expected to be completed in mid to late June.

The Princeton University Art Museum commissioned Lin to design a two-part installation for the grounds adjacent to the Lewis Arts complex, which celebrated its opening last October.

"The Princeton Line" is a continuation of a series of recent works referred to by the artist as "Earth Drawings" and will comprise two elements — an earthwork and a water table. It is designed to provide an invigorated outdoor setting that invites visitors to explore undulating spaces created by mounded earth with the expectation that students will use these spaces for ad hoc performances and plein air classes. 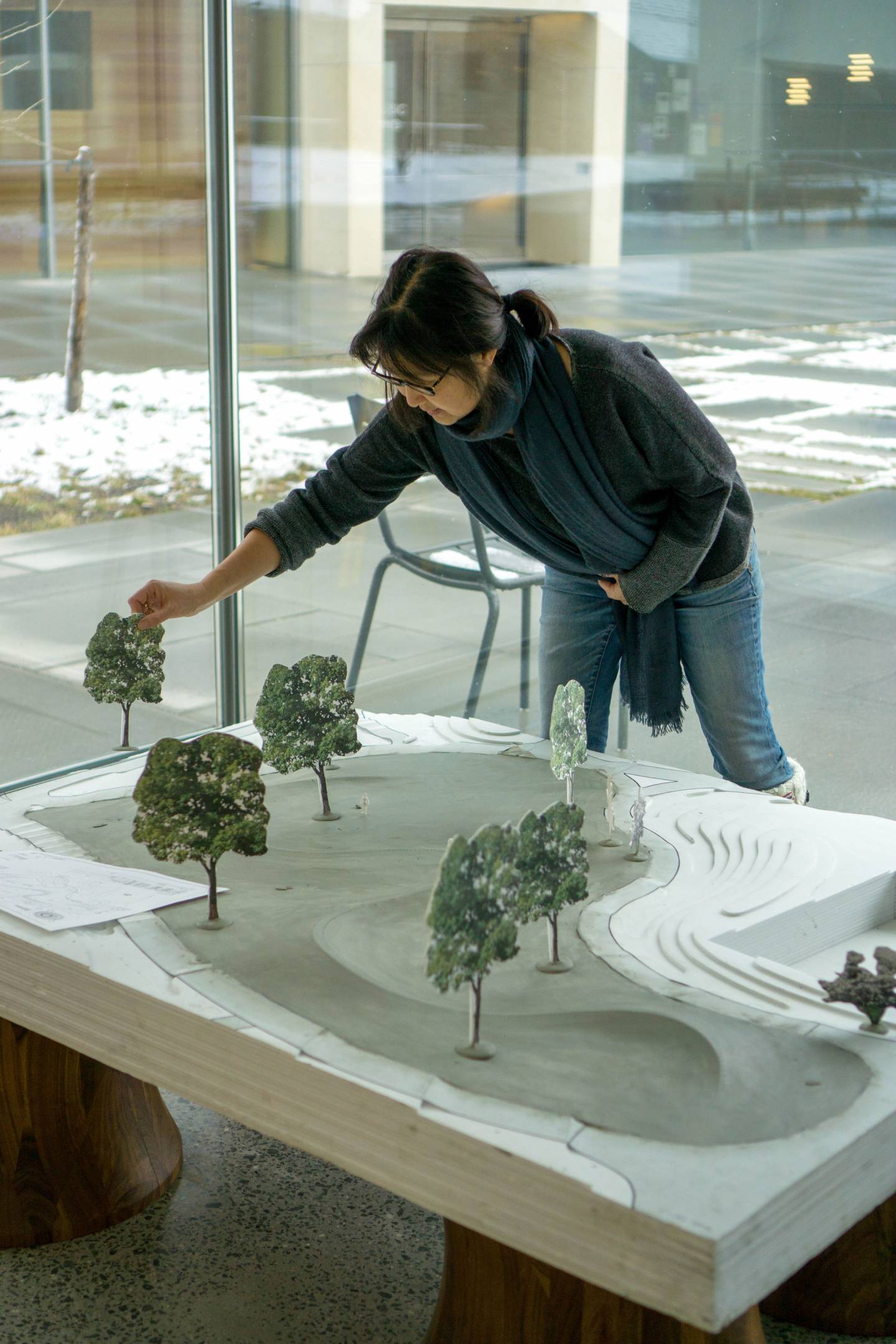 Lin visits campus in March with her model for the installation being created on grounds adjacent to the new Lewis Arts complex.

A 2016 recipient of the Presidential Medal of Freedom, Lin first achieved national recognition for her design for the Vietnam Veterans Memorial in Washington, D.C.; she was an undergraduate at Yale University when her design was chosen in a national competition. During the course of her interdisciplinary career, Lin has created a powerful and highly influential body of work that includes large-scale site-specific installations, intimate studio artworks, architectural works and memorials.

Other earthworks of this type by Lin include the "Eleven Minute Line" (2004) at the Wanås Foundation in Knislinge, Sweden, and the "Kentucky Line" (2008) in Louisville, Kentucky. The "Princeton Line" will be the first "Earth Drawing" installed in a public space in the United States.

The second component of the commission is a granite water table with a base crafted to form an oblate spheroid. The fountain is situated within a gravel plaza that appears to float above the ground plane of the side facing the arts complex while incorporating concrete-edge seating along the back. The fountain’s veil of water will be wispy as it falls from the 12-foot-long tabletop made of jet mist granite.

The table’s elliptical shape, inspired by diagrammatic drawings of the Earth's orbit around the sun; the water weir, inspired by the notion of a black hole; and the jet mist granite, which has a white, almost starry patterning, come together to help “reflect the galaxy” — an allusion to the work of one of Princeton’s most-acclaimed former residents, Albert Einstein. Precedents for the Princeton water table can be found at Yale and Brown universities.

“By making a work in which she shapes and draws a line in the earth, together with the most abstract of her water tables to date, I am certain that Maya will make a lasting and engaging mark on our campus,” said James Steward, the Nancy A. Nasher–David J. Haemisegger, Class of 1976, Director of the Princeton University Art Museum.

"Lin was chosen in a deliberative process involving both the Campus Art Steering Committee and a group of varied stakeholders from the Lewis Center who agreed with us that public art for the Lewis Arts complex ought to help connect [architect] Steven Holl’s new buildings with the surrounding landscape," he said.

“As a site-specific artist, having the chance to create two works in dialogue with one another that respond to the cultural context in which they are placed and allow me to explore two distinct aspects of my work is a unique and challenging opportunity,” said Lin. “Scott Burton's sculpture 'Public Table' [on the Princeton campus] was the inspiration for my very first water table, the Civil Rights Memorial [built in 1989 in Montgomery, Alabama] — and now I can come full circle with this new work.”

A topographic plan for "The Princeton Line," which will include an earthwork and a water table.

Steward has known Lin for about 20 years and has long wanted to add her work to Princeton's campus art collection. "She is simply one of the most extraordinary designers of our time," he said. "Her work meets many of our objectives, including diversifying the formal characteristics of the campus art collection and moving away from monumental sculptural forms."

Lin was awarded a B.A. in 1981 and a Master of Architecture in 1986, both from Yale, and has maintained a professional studio in New York City since. She serves on the boards of the Bloomberg Foundation and the What is Missing? Foundation. She lives in New York City and is represented by Pace Gallery. 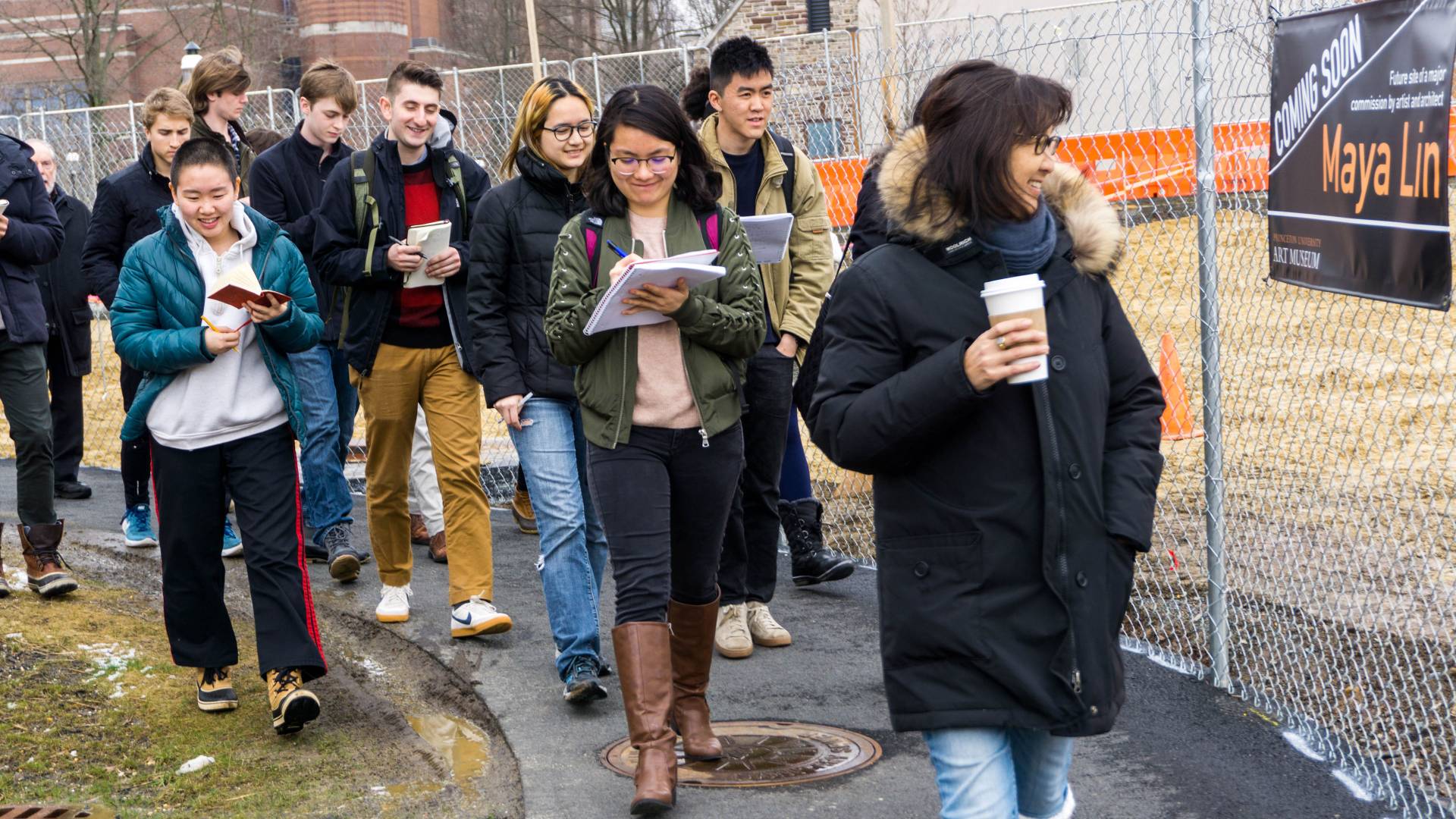 Lin gives a tour of the site to Princeton students in early spring.