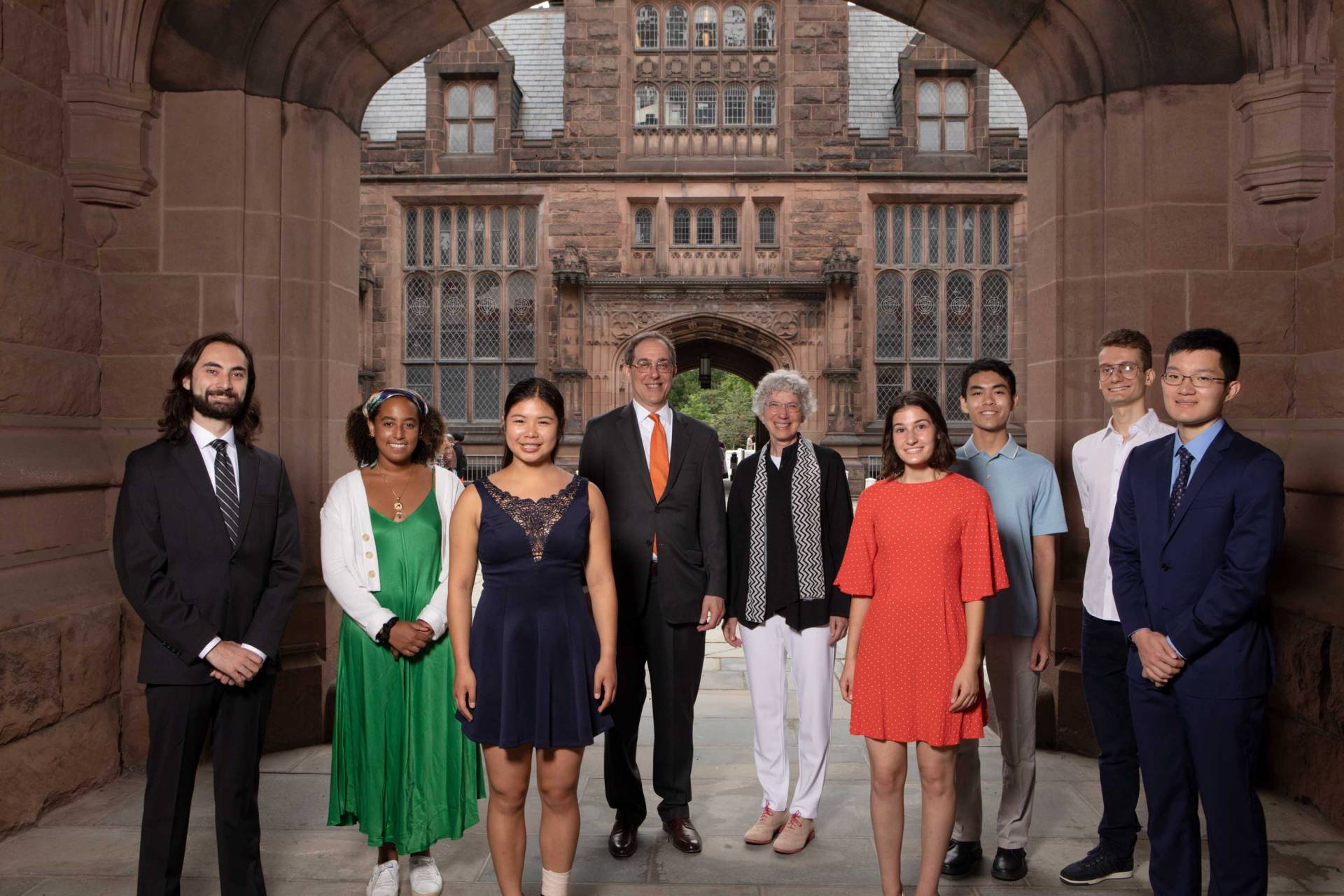 Princeton University celebrated the academic accomplishments of its students with the awarding of four undergraduate prizes to seven students at Opening Exercises on Sunday, Aug. 29.

“We’re delighted to honor this year’s prize winners,” Dean of the College Jill Dolan said. “Despite the additional challenges of the COVID-19 pandemic, they’ve managed to maintain their own high standards and to continue excelling in their studies. These impressive students model the deep curiosity and love of learning that’s the hallmark of our liberal arts education at Princeton. We’re proud of their commitment to knowledge and look forward to their future contributions to our campus and our larger communities.”

This year’s Freshman First Honor Prize is shared by Yonit Krebs and Steven Wang. The prize is awarded to members of the sophomore class in recognition of exceptional achievement during the first year.

Krebs, of St. Louis Park, Minnesota, attended St. Louis Park High School. As a student whose first year at Princeton was fully virtual, she is excited about experiencing Princeton in-person this fall. She is a member of First College.

This summer, funded by the Bogle Fellowship, Krebs conducted research for the ICWA Law Center, a non-profit legal service center in Minneapolis that works with Native American families, specializing in the Indian Child Welfare Act. She investigated the impact of a child’s initial placement in cases where the primary presenting allegation was of prenatal exposure to controlled substances.

Wang, of Ningbo, Zhejiang, China, attended Williston Northampton School in Easthampton, Massachusetts. He is considering concentrating in mathematics and with the return to in-person residential learning, he is looking forward to studying in the math department common room with his friends. He is a member of First College.

This summer, he worked virtually as a research assistant for Daniel Marlow, the Evans Crawford 1911 Professor of Physics, performing analysis on data on eta decays from CERN.

This year’s George B. Wood Legacy Sophomore Prize is shared by André Koch Liston and Frederick Qiu. The prize is awarded each year to members of the junior class in recognition of exceptional academic achievement during sophomore year.

Liston is from Curitiba, Paraná, Brazil, where he attended high school at Bom Jesus Centro. He is a concentrator in chemistry and is pursuing certificates in materials science and engineering.

Liston conducts research in the lab of Gregory Scholes, the William S. Tod Professor of Chemistry, and is treasurer of the Princeton University Chemical Society. He has served on the Princeton University Energy Association (PUEA) Fall Conference Finance Committee and as a volunteer for Scientia Prima, the Brazilian pre-undergraduate research journal. He is a member of First College, where he is a residential college adviser.

This summer, he completed a virtual internship at the Max Planck Institute of Quantum Optics.

Qiu, of Doylestown, Pennsylvania, attended Central Bucks High School East. He is a computer science concentrator and is also pursuing a certificate in applied and computational mathematics.

A member of First College, he has served as a lab TA in the computer science department, as a tutor and as a contributor to an open source plugin for a Minecraft server.

This summer, he did research virtually on negatively dependent probability distributions and their applications to combinatorial optimization with Sahil Singla, a former postdoc at Princeton and currently an assistant professor at Georgia Tech.

This year’s George B. Wood Legacy Junior Prize is shared by Silma Berrada and Michelle Woo. The prize is awarded to members of the senior class in recognition of exceptional academic achievement during junior year.

Berrada, of Mequon, Wisconsin, attended Homestead High School. A member of First College, she is an English concentrator and is pursuing certificates in African American studies, creative writing, theater and visual arts.

For her senior thesis, she is creating a mixed media project to confront how white supremacy has impacted the subject of Black love alongside her own experiences in a family with three generations of divorce.

Outside of the classroom, she has served on the English department’s anti-racist pedagogy advisory committee and was a creator and presenter for the Lewis Center for the Arts’ Arts Climate and Inclusion Faculty-Staff Teach-In.

This summer, as a recipient of the Alex Adam ‘07 Award — which provides support to three undergraduates to spend a summer pursuing a project that will result in the creation of new artistic work — Berrada has been creating art as a playwright, poet, photographer and painter in an art studio.

Woo, of Riverside, Connecticut, attended Greenwich High School. A member of Rockefeller College, she is a computer science concentrator (B.S.E.) and is pursuing certificates in applied and computational mathematics, finance, cognitive science and entrepreneurship.

She has served as an engineering interactor and academic chair of the Computer Science Council. Outside the classroom, she is president of Princeton Women in Computer Science, co-captain of the synchronized skating team and a leader trainer for Outdoor Action. She served as director of participant outreach for the 2019 Envision Conference.

Anthony Hein received the Class of 1939 Princeton Scholar Award, which is awarded each year to the undergraduate who, at the end of junior year, has achieved the highest academic standing for all preceding college work at the University.

Hein, of Colonia, New Jersey, attended John F. Kennedy Memorial High School. He is a computer science concentrator and is pursuing a certificate in applied and computational mathematics.

In lieu of a senior thesis, he is enrolled in independent work seminars as part of the computer science B.S.E. program.

Hein has served as a lab TA course assistant in the computer science department. He has had software engineering internships with Pratt & Whitney, the United States Air Force, Five Rings Capital and Capital One.

Outside the classroom, he has served as the inaugural chief technology officer of the Daily Princetonian.

A member of First College, Hein is inspired by Matthew Weinberg, assistant professor of computer science, and his dedication to his teaching and to his students. Hein said that during the tumultuous spring 2021 semester, Weinberg demonstrated extreme empathy when he revised policies to promote quality learning and reduce stress on his students.