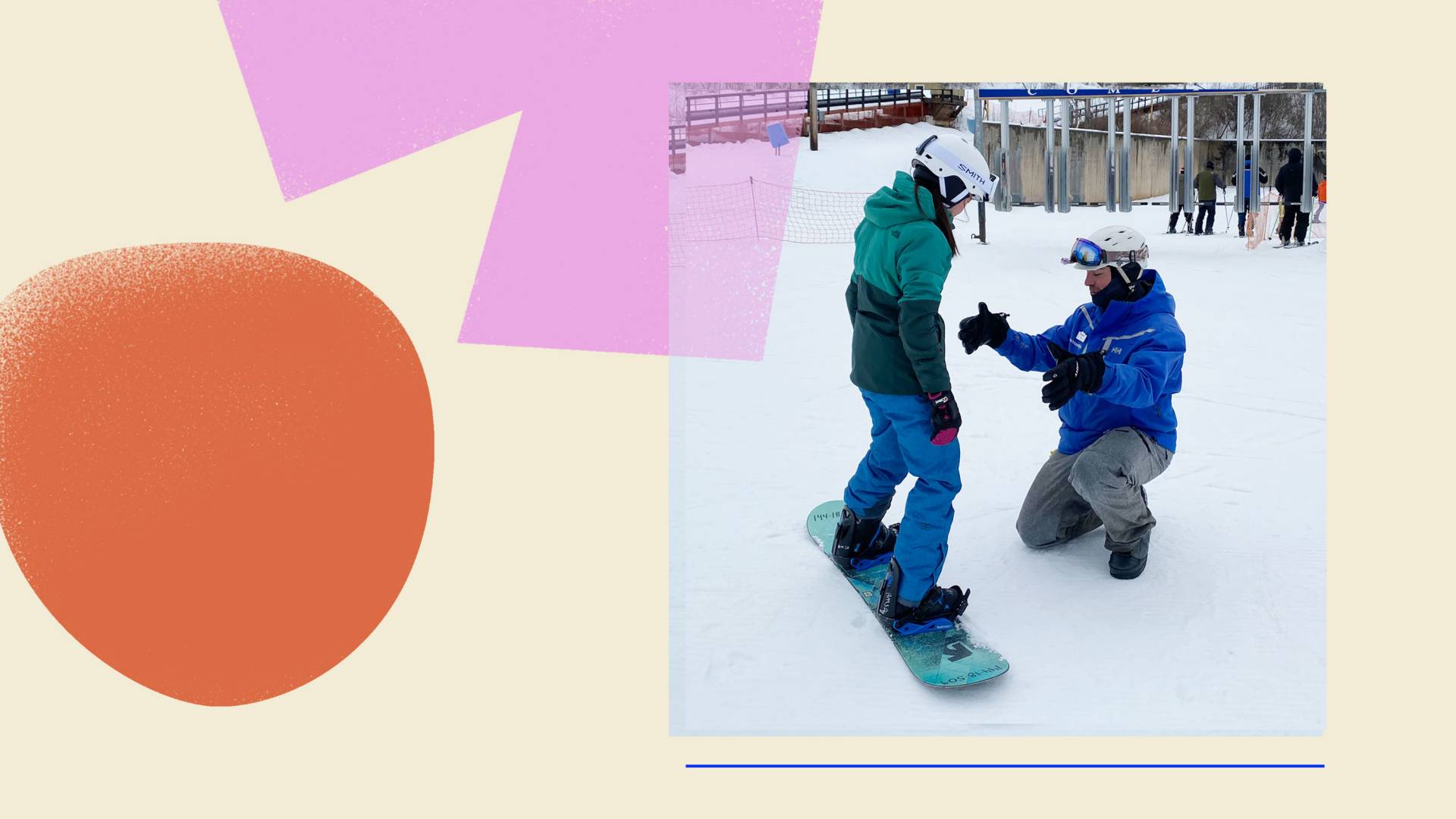 Princeton's Wintersession program offers opportunities for discovery and connection. More than 4,000 members of the University community signed up to participate this year.

Learning for the sake of learning is the aim of Princeton University’s Wintersession program. Whether it was Olympic runner Allyson Felix sharing how she overcomes pre-race nerves or tech journalist Kara Swisher touting the virtues of listening closely, invaluable lessons were imparted during the two weeks of workshops, classes, evening events, field trips and conversations.

More than 4,000 members of the University community signed-up to participate in one or more Wintersession offerings from Jan. 10-23. The sessions were led by undergraduates, graduate students, faculty and staff, and also featured alumni and guest speakers.

“Our goal is to offer unexpected, active and intriguing events for everyone,” said Judy Jarvis, director of the Office of Wintersession and Campus Engagement (OWCE), which organizes Wintersession and other campus-wide offerings throughout the year. 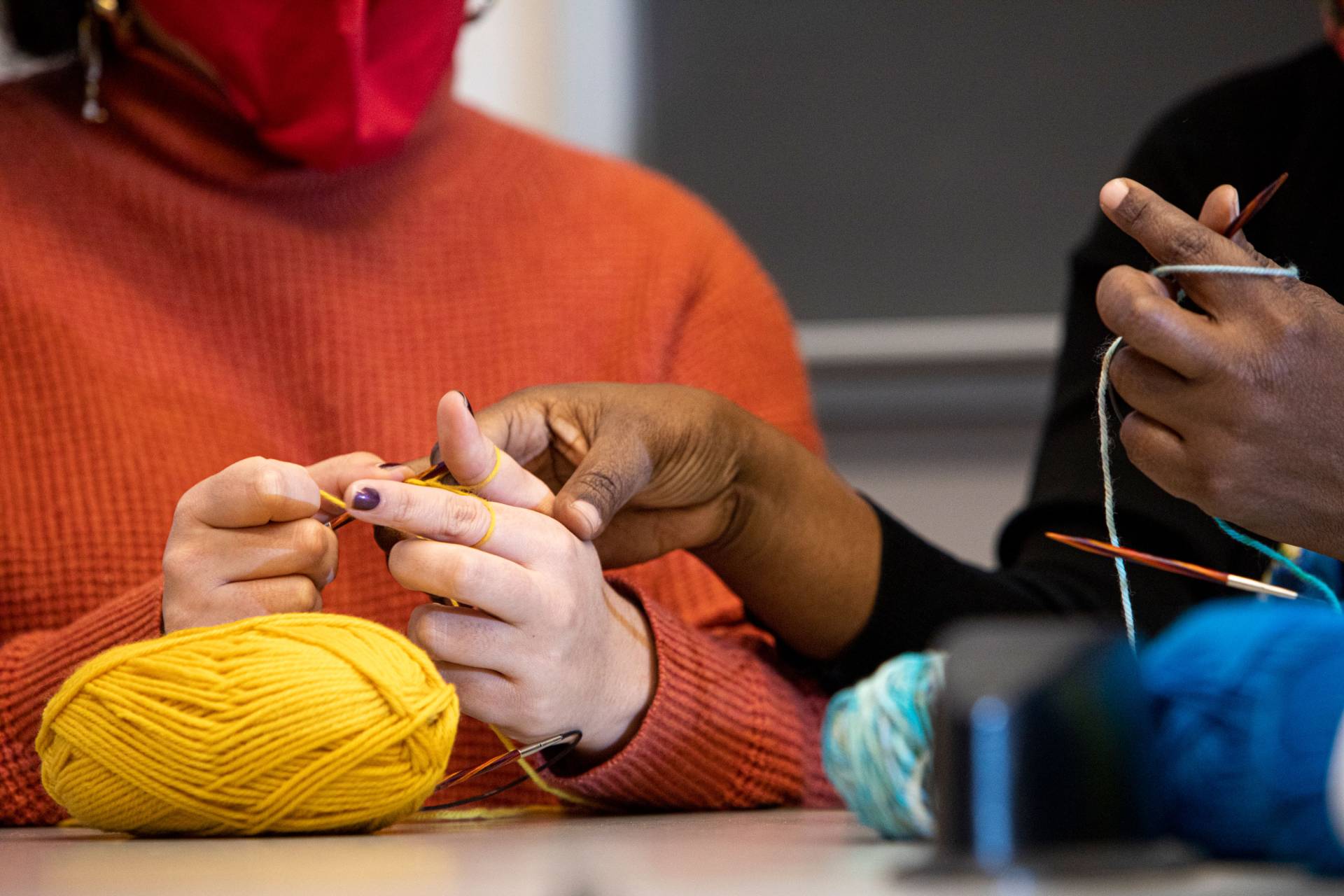 More than 450 workshops, classes, evening events and field trips were held during Wintersession, including a hands-on knitting class taught by Amina Shabani, lecturer in Spanish and Portuguese.

Jarvis added: “Wintersession is all about exploration, learning for the sake of learning, and making connections across identities and roles. It is astounding and fantastic that so many undergraduates, graduate students, faculty and staff are ready and willing to share their talents with campus.”

Wintersession featured over 450 wide-ranging programs, including: 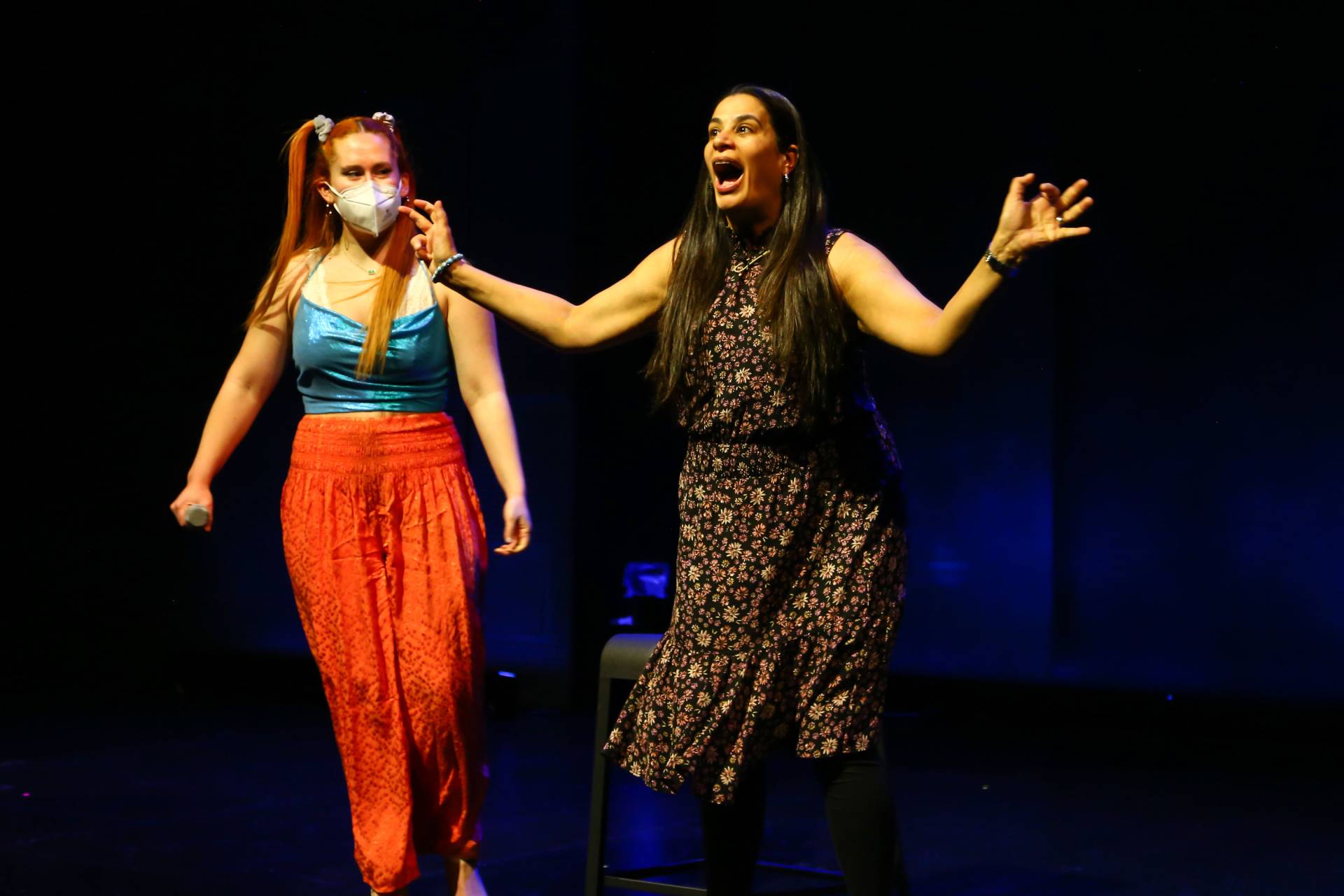 Comedian, disability advocate and Princeton Arts Fellow Maysoon Zayid (right) performs her comedy special “Limping on the Edge” as part of Wintersession. She was introduced by Jenni Lawson (left), Class of 2023.

The unique program — held during the break period between fall and spring semesters — fosters connections and builds community.

“Just like students, staff and faculty don’t always have opportunities to take risks and explore, and Wintersession gives us the chance to do just that,” said Leanna Jahnke, OWCE program coordinator. “During the ‘Dumplings for Dinner’ demonstration we saw undergraduate students, graduate students, staff members and professors filling, sealing and marveling at the dumplings they had created together, which is surely a sight that does not happen in our day-to-day routines on campus!”

Although this was Wintersession’s second year, it was the first time some events could be held in person amid the ongoing COVID-19 pandemic.

“Wintersession is even more important in times of stress and upheaval, because it’s an opportunity for students, faculty and staff to explore with no stakes — nothing is mandatory and nothing is graded,” Jarvis said. “We’ve had students and staff write us some really nice notes about how the workshops and events have brought them joy. I firmly believe that Wintersession can and does contribute positively to students’ and staff’s mental health.”

Below are highlights from just a few of the many Wintersession 2022 programs.

Beyond the Resume with Olympic gold medalist Allyson Felix 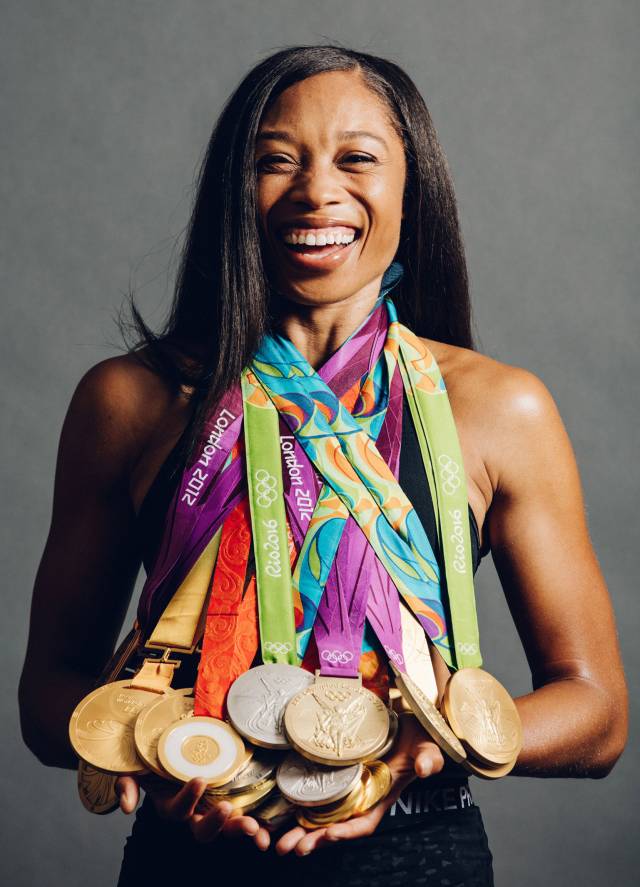 Allyson Felix, the most decorated track and field Olympian in U.S. history, spoke at the Wintersession keynote event called "Beyond the Resume."

Felix, the most decorated track and field Olympian in U.S. history, talked about her athletic accomplishments, her activism and her interests off the track during Wintersession’s keynote event on Saturday, Jan. 22. The event was co-sponsored by Athletics.

Seated on the Richardson Auditorium stage across from John Mack, the Ford Family Director of Athletics, Felix was candid about times of personal and professional struggle.

“Being an Olympic athlete can be kind of a lonely road, and being a track athlete can feel more isolating than some of the team sports,” Felix said. “A lot of my life has been traveling and missing birthdays and missing special family events. But at the same time I’m doing what I absolutely love.”

Mack, a Class of 2000 graduate who captained Princeton men’s track and field team as an undergraduate, asked the 36-year-old Felix what advice she would give her younger self.

“I would tell myself, more than anything, to embrace failures and learn from them,” Felix said.

“Earlier in my career I would almost be paralyzed from a loss. In every defeat there is something that I can get better from and then I can move forward.”

The 11-time Olympic medalist said her mindset changed immensely after becoming a mother. Felix has been vocal about how treatment by her former sponsor Nike while she was pregnant inspired her advocacy for women’s equality.

“I never saw in my sport a mother who was celebrated; a woman who had a child and yet came back to compete. Women were doing it, but their stories weren’t being told or they were struggling to compete,” she said. “Last summer’s Olympic games were bigger than just running. A lot of people didn’t believe I could get back to the Olympics. It was first time I felt like a representation for other people, for women and for mothers.”

Felix said her experiences inspired the launch of Saysh, a lifestyle brand designed with women in mind. Saysh’s running shoe is molded specifically for a woman’s foot, and Felix wore them while competing at the Tokyo Olympics. The business is one example of her work for women athletes.

“I feel like it’s a privilege to speak for my community, to fight on behalf of other people who might not have a voice or the platform,” Felix said “I hope [my daughter] is able to go after whatever she wants to. I hope that she is able to see in this world a variety of examples of what she can be. You can come through adversity. You can get through hard things. I hope she grows up to be a really strong woman.”

Television host Joe Scarborough and Eddie Glaude, chair of the Department of African American Studies, started and ended their day together on Friday, Jan. 21. In the morning, they were discussing news and politics on MSNBC, and by evening they were trading thoughts on fatherhood and philosophy in Richardson Auditorium. Their talk was co-sponsored by African American Studies.

While the two men admitted they can disagree, they expressed mutual respect. 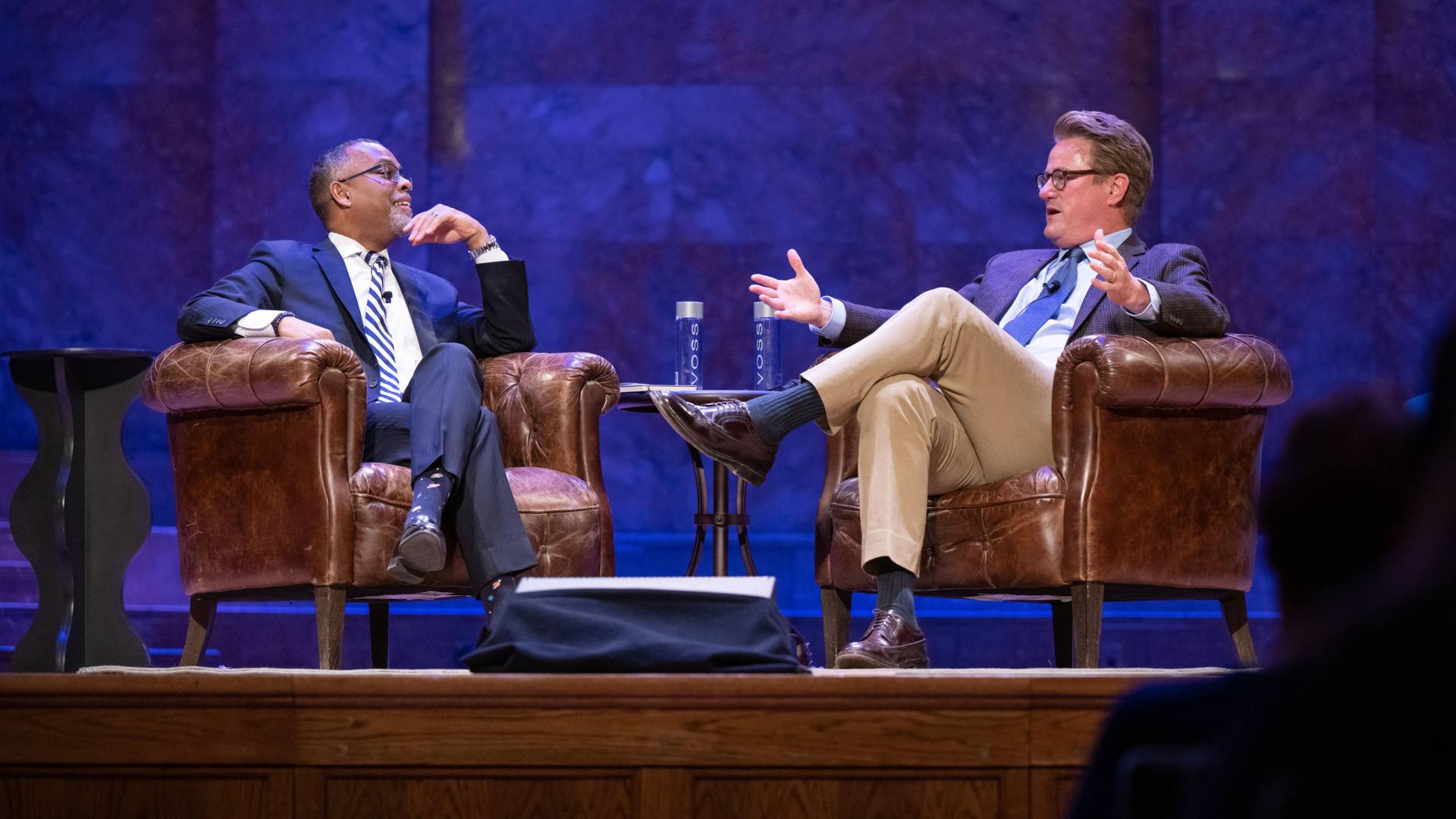 “Since 2016 when I first came on the show … it has been an amazing journey,” Glaude said. “What is said on ‘Morning Joe’ sets the table for the news cycle of the day. [I appreciate] Joe’s decency. That decency is the baseline for what he does.”

Scarborough said he appreciates their open and honest dialogues, often about difficult subjects.

“I love Eddie because Eddie has an open heart,” Scarborough said. “When we’re together we talk about the toughest questions about race. Two things can be true at same time. I love our country. Our founding fathers created the most extraordinary documents that have ever been created before … and they were slave owners. Eddie and I work constantly to hold these two thoughts together.”

To end their conversation after a long day together, the friends and colleagues stood up and hugged.

“How did you get so awesome?” was the first question Professor of English Jeff Nunokawa asked technology journalist Kara Swisher during their Jan. 15 “Unexpected Conversation.”

Swisher is the host of the "Sway" podcast, a New York Times opinion writer and an editor-at-large at New York. 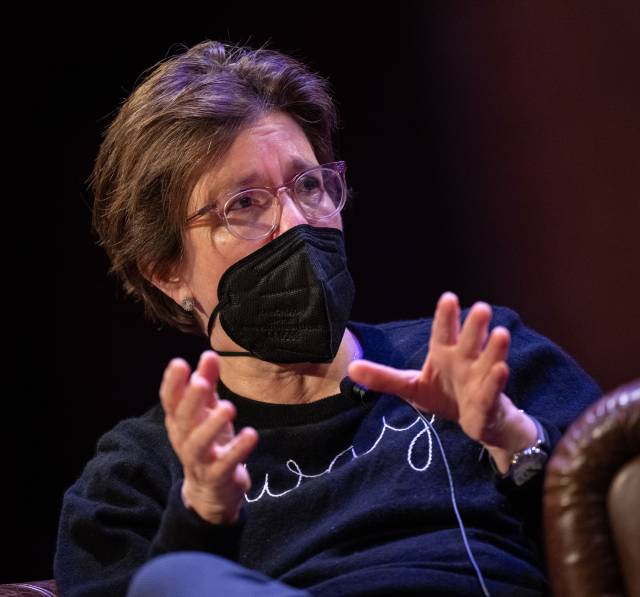 Nunokawa said Swisher has an amazing ability to talk to powerful people with ease, whether House Speaker Nancy Pelosi or Apple CEO Tim Cook. “You disarm people with your tone of voice and the words you use,” he said.

“I like to interview the people I find interesting. I try really hard to be diverse. I spend a lot of time calling people over and over again,” Swisher said, half-joking that the most effective way to land an interview is to “harass someone on Twitter.”

“There is a lot of performative-ness in life,” Swisher said. “I think a lot of people are surprised by straight-ahead questions. It’s not novel what I’m doing. It is just that a lot of people don’t do it.”

Animal Tracking in the Institute Woods 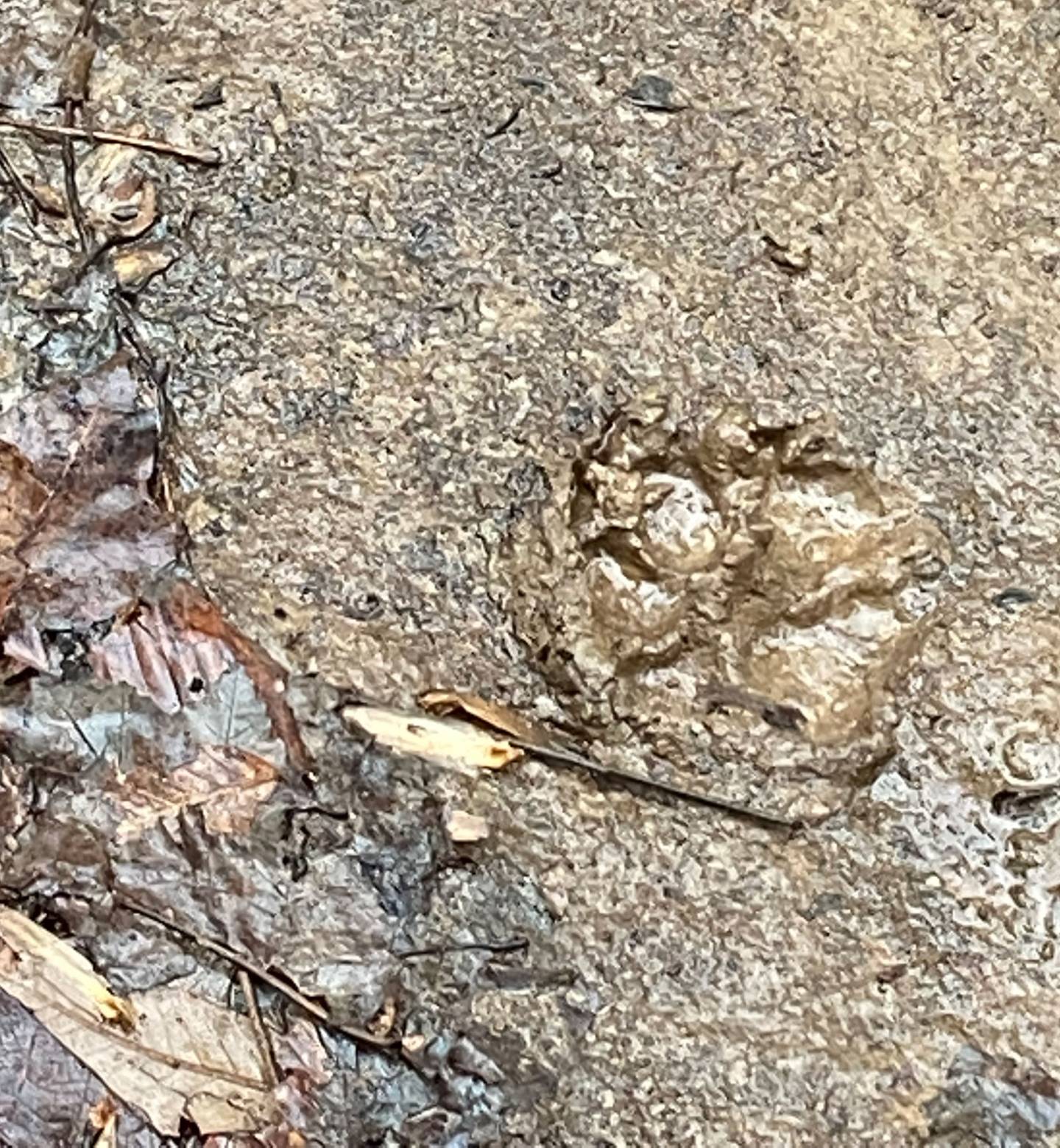 Paw prints are visible in the mud during a Wintersession walk in the Institute for Advanced Study woods.

After a talk at Lewis Library on the fundamentals of tracking animals in the wild — habitat clues suggesting which animals might be present, hair and feathers left behind, footprint shapes, walking patterns, the always helpful scat — students and staff at the Jan. 17 Wintersession trip “Animal Tracking in the Institute Woods” piled into two vans for the five-minute drive to the woodland trails at the nearby Institute for Advanced Study. The trip was organized by Outdoor Action.

“It’s not very hard to find animal tracks,” trip leader Brendan Raville said, “and you can see some cool stuff if you know what to look for.” Raville is a Class of 2021 graduate who concentrated in ecology and evolutionary biology (EEB).

Trip participants were soon making headway. Telltale scuffs and depressions in fallen leaves yielded hidden, heart-shaped hidden deer tracks. The soft mud from a heavy rain held a perfect impression of a dog’s pawprint, with four front-facing toes and a heel pad. (Coyote prints and fox prints are similar and sometimes visible in the Institute Woods after a snowfall.)

Tiny footprints shaped like human handprints suggested squirrel activity, and Raville, a Princeton Tiger Futures Fellow with a 1-year joint position in the Office of Sustainability and the Outdoor Action Program, pointed out a black squirrel and a grey one bickering on a branch overhead.

“I was surprised by just how much information can be gained from clues that usually pass beneath our feet unnoticed, said participant Mary Cate Hyde, a current EEB student from the Class of 2023. “This workshop made me more attuned to the signs of life all around us, and added a whole new level of wonder to my next hike in the woods or walk to class.”

The virtual session was led by Papadakis, program manager in Gender and Sexuality Studies, and Paryn Wallace, undergraduate administrator in the Princeton Neuroscience Institute. Papadakis and Wallace — who were first-gen students themselves — have each conducted graduate research on the experiences of first-generation students at Ivy League schools.

“You don’t know someone is a first-gen student by looking at them,” Papadakis said. “First-gens come from a diversity of backgrounds. Not all first-gens are low-income. First-gen as an identity transcends racial, ethnic and socioeconomic backgrounds.”

Papadakis commended the resources available at Princeton for first-gen students, like the Emma Bloomberg Center for Access and Opportunity.  “But you don’t always have to build a building or a program,” she said. “If you are working with first-gen student and they trust you, take them out for coffee and develop that professional relationship. It can be about informal conversations and connections.” 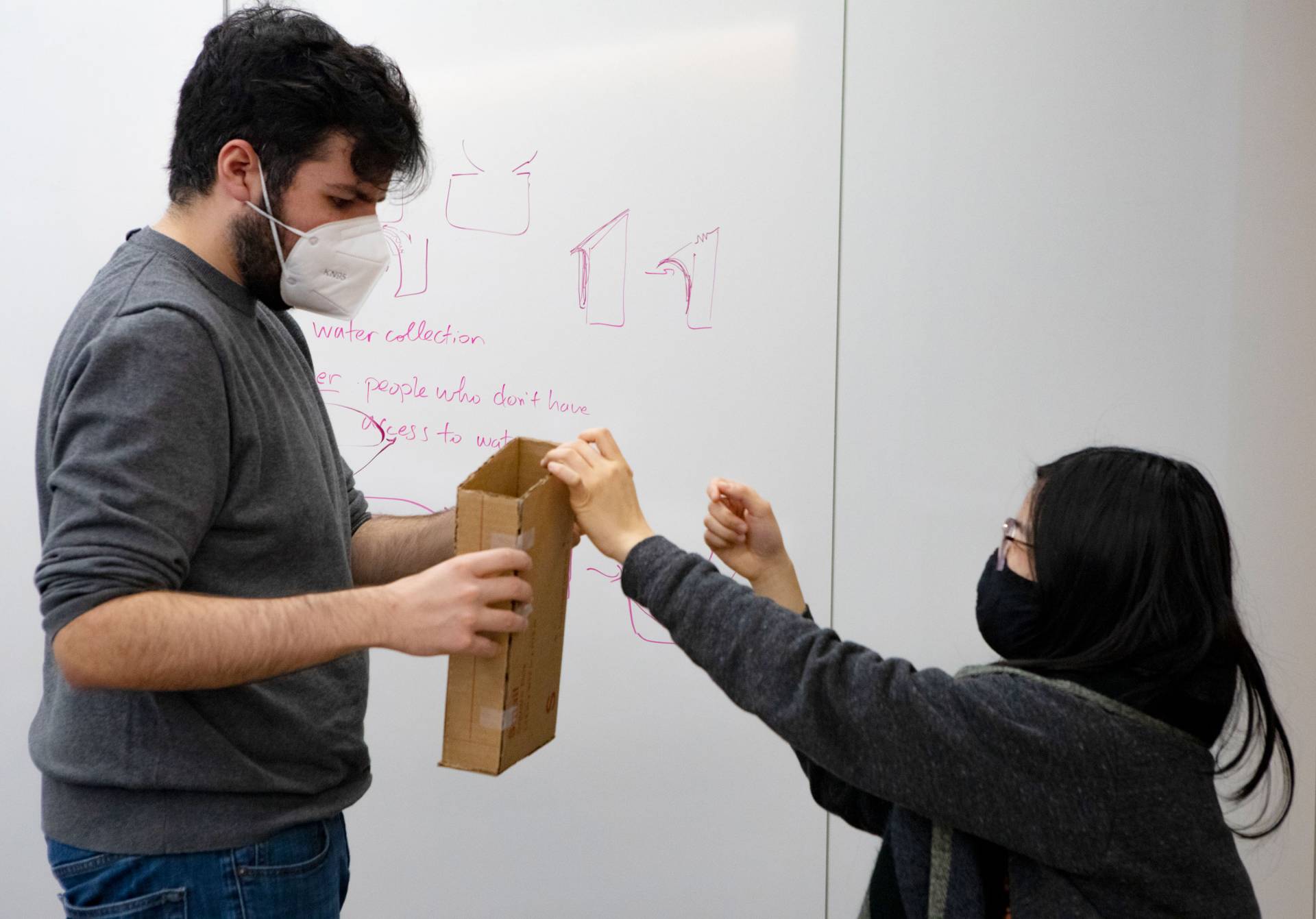 Students work together during the workshop “Bio Inspired Design: A Lesson From Pinecones,” led by Aimy Wissa, assistant professor of mechanical and aerospace engineering.

Rebecca Batcha contributed to this story.

Prospective graduate students get a peek inside Princeton Ph.D. programs

‘We have all these people that came before us, and we carry that in who we are.’ Our Year of the Tiger series continues.