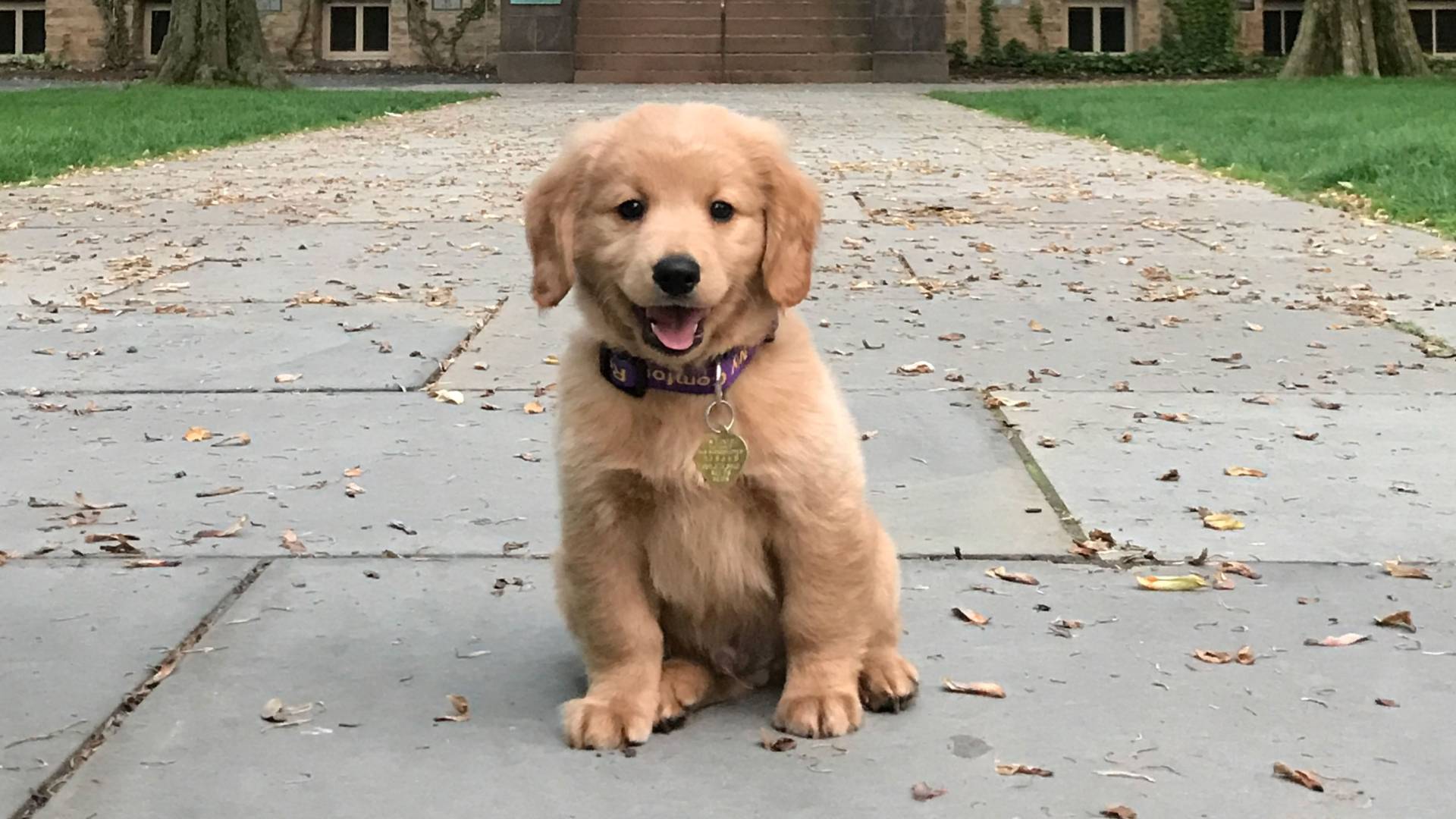 What is your dog’s lifespan? A Princeton geneticist is seeking the keys to canine health and longevity.

Princeton researchers are leading the genetics work for the Dog Aging Project, which is studying tens of thousands of dogs over the course of their lives to develop a full picture of dog health and aging. Pictured is Koa, trained as a service dog for a Princeton senior thesis.

How old is your dog in human years? And what factors contribute to a long and healthy life for a dog?

For years, it’s been generally accepted that “dog years” are roughly human years times seven – that a 1-year-old puppy is like a 7-year-old child, and an 11-year-old elderly dog is like a 77-year-old senior citizen. But it’s actually much more complicated, say experts.

Part of the problem is that while humans have clear metrics for healthy aging, little is known about “normal aging” for our four-legged friends. Big dogs tend to age the fastest — maybe 10 times faster than humans — while little breeds may live to be 20 years old, with “dog years” about five times human years.

The Dog Aging Project, founded in 2018, is by far the most ambitious project tackling the question of canine longevity, enrolling and studying tens of thousands of dogs of all sizes, breeds and backgrounds to develop a thorough understanding of canine aging. Their open-source dataset will give veterinarians and scientists the tools to assess how well a specific dog is aging and will set the stage for further research into healthy aging — in both dogs and people.

The researchers detailed their project and its potential implications for both human and veterinary medicine in an article published in the current issue of the journal Nature. One of its most intriguing avenues of inquiry will analyze the DNA of exceptionally long-lived dogs, the “super-centenarians” of the dog world.

“This is a very large, ambitious, wildly interdisciplinary project that has the potential to be a powerful resource for the broader scientific community,” said Joshua Akey, a professor in Princeton’s Lewis-Sigler Institute for Integrative Genomics and a member of the Dog Aging Project’s research team. “Personally, I find this project exciting because I think it will improve dog, and ultimately, human health.”

Akey, a dog lover with a 5-year-old rescue dog named Abby and a 1-year-old purebred lab named Zoey, co-leads the genetics analyses with Elinor Karlsson at the Broad Institute.

“We are sequencing the genomes of 10,000 dogs,” Akey said. “This will be one of the largest genetics datasets ever produced for dogs, and it will be a powerful resource not only to understand the role of genetics in aging, but also to answer more fundamental questions about the evolutionary history and domestication of dogs.”

The Dog Aging Project (DAP) expects to run for at least 10 years. To date, more than 32,000 dogs have joined the “DAP Pack,” as the researchers call their canine citizen scientists.

“We are still recruiting dogs of all ages, all breeds — purebred or mixed breeds, all sizes, all across the United States,” said William Thistlethwaite, a graduate student who works with Akey in the Lewis-Sigler Institute. “Especially puppies and young dogs up to 3 years old.”

When a dog joins the Pack, their owners agree to fill out annual surveys and take measurements of their dogs for the duration of the project; some may be asked to collect cheek swabs for DNA sampling. In addition, the DAP team works with veterinarians across the country who assist by submitting fur, fecal, urine and blood samples of select Pack members.

The researchers hope to identify specific biomarkers of canine aging. They anticipate that their findings will translate to human aging, for several reasons: Dogs experience nearly every functional decline and disease of aging that people do; the extent of veterinary care parallels human healthcare in many ways; and our dogs share our lived environments, a major determinant of aging and one that cannot be replicated in any lab setting.

“Given that dogs share the human environment and have a sophisticated health care system but are much shorter-lived than people, they offer a unique opportunity to identify the genetic, environmental and lifestyle factors associated with healthy lifespan,” said Dr. Daniel Promislow, the principal investigator for the National Institute on Aging grant that funds the project and a professor of biology at the University of Washington (UW) College of Arts and Sciences and of laboratory medicine and pathology at the UW School of Medicine.

In particular, the researchers want to look at 300 oldest dogs in the Pack to see if they can identify the keys to their longevity. “One part of the project that I am super excited about is a ‘super-centenarian’ study, comparing the DNA of exceptionally long-lived dogs to dogs that live to the average age for their breed,” said Akey, the Princeton geneticist. “This is the first study of its kind in dogs (to my knowledge), and I think it’s a clever way of trying to find genetic differences that contribute to exceptional longevity.”

Within a few months, the team plans to open their enormous dataset — fully anonymized — to share with scientists around the world. Researchers from many different fields will have the opportunity to contribute to the study in countless different ways, based on their interests.

“It is an honor to share our work with the scientific community,” said Kate Creevy, lead author on the paper and DAP’s chief veterinary officer. “The Dog Aging Project is creating a resource with the power to transform veterinary medicine, aging research, and many scientific and non-scientific fields of inquiry.”

For more information, or to learn how to enroll your dog in the ongoing project, visit https://dogagingproject.org.