An ambitious new collaboration promises to expand our understanding of what some physicists have called the “glue” that holds the universe together — the strong nuclear force. 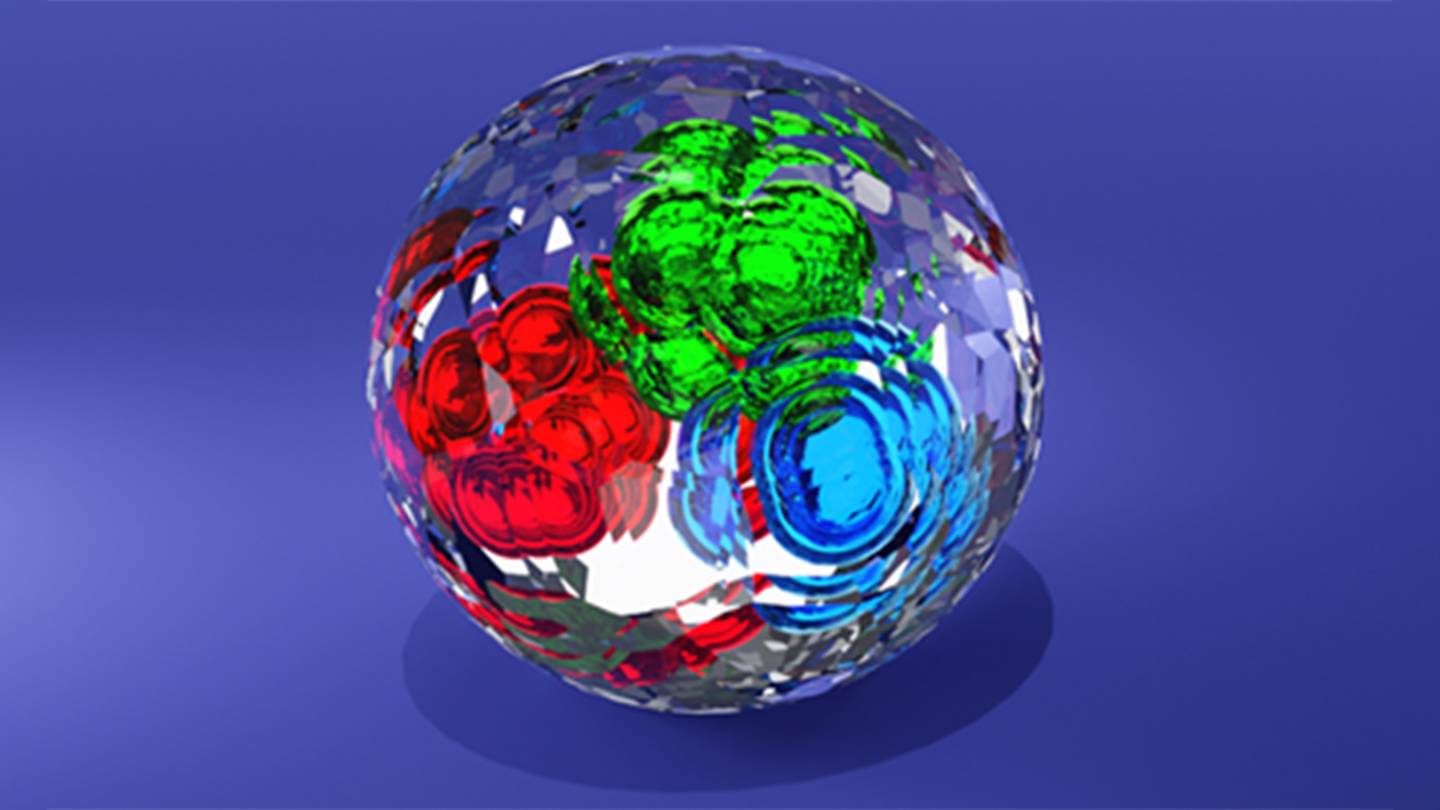 A new Princeton-led research collaboration will explore quantum chromodynamics, the theory that describes the ‘glue’ that holds the universe together by explaining how quarks and gluons are confined inside neutrons and protons.

“One of the fundamental forces of nature is the strong nuclear force,” said Igor Klebanov, Eugene Higgins professor of physics at Princeton University, a 1986 Ph.D. alumnus, the director of the collaboration and a leading expert in the field of physics. “Without the strong force, there would be no life as we know it.”

The collaboration, which began in early September, is being funded by the New York-based Simons Foundation — a private foundation created in 1994 that is one of the nation’s largest charitable science-oriented organizations. For nearly 30 years, the Simons Foundation has been dedicated to funding fundamental research on everything from nuclear fusion and condensed matter physics to abstract mathematics.

“The Simons Foundation has been playing an increasingly powerful role in funding science in the U.S. and beyond,” Klebanov said. “In particular, they have a very vigorous program of funding fundamental physics.”

The Simons Collaboration on Confinement and QCD Strings, so named because it explores the theory of the strong nuclear force known as quantum chromodynamics (QCD), includes 13 principal investigators from the United States, Italy, Switzerland, Israel and the United Kingdom. Each investigator will receive a separate grant and will “bring his or her own expertise to bear on this problem,” Klebanov said.

In this case, the “problem” involves a precise understanding of the strong nuclear force, which, along with the weak nuclear force, electromagnetism and gravity, constitute the four fundamental forces of nature. These are typically defined as the forces that are responsible for every known interaction in nature.

The strong nuclear force is regarded as the most powerful force in nature. While it has a very short range, around a femtometer (one quadrillionth of a meter), it is about 100 times stronger than electromagnetism. The strongly interacting particles are called hadrons, and they come in two varieties: baryons, such as protons and neutrons, and mesons, such as the pi and K mesons.

“It is the strong nuclear force that holds the protons and neutrons together in the tiny atomic nuclei, overcoming the electrostatic repulsion of the protons,” said Klebanov.

The fundamental theory describing the strong nuclear force is called quantum chromodynamics, from the Greek word chromo meaning color. Similar to the quantum electrodynamics (QED) theory, which describes how electrically charged particles interact with one another by exchanging photons, QCD describes how quarks interact by exchanging the special force carriers called gluons. Quarks and gluons are the tiny particles that are the building blocks of hadrons. Each quark, in the parlance of physics, has a “flavor,” which describes its particular mass and charge. These flavors, further, come in three color varieties, such as red, green and blue. (This is not an actual description of the quarks’ hues, because quarks are colorless, but rather a convenient way to distinguish between the three different charge types that govern the strong force.) Gluons, by contrast, come in eight color varieties. These gluons are responsible for holding the protons and neutrons — the particles that make up the nucleus of an atom — together.

An important and much-studied aspect of QCD is that the quarks and gluons are confined within the hadrons; they cannot escape to move around freely. This phenomenon was first recognized in the mid-1960s by world-renowned physicist Murray Gell-Mann, who came up with the idea of quarks and later coined the term “quark confinement.” Subsequent experiments have shown that the quarks behave as almost freely when they are probed by the scattering of energetic electrons. A theoretical explanation for this is provided by the “asymptotic freedom” of QCD, which was discovered in 1973 by David Gross and Frank Wilczek at Princeton and independently by David Politzer at Harvard. This discovery was honored by the 2004 Nobel Prize.

As the quarks are pulled farther apart, a force appears that confines them inside the hadrons. The analogy of a rubber band is sometimes used to illustrate this scenario: its energy is proportional to the distance by which it is stretched. In QCD this rubber band is called a “confining string.”

“The strong force provides the glue to hold and confine,” said Klebanov. “When you stretch quarks farther apart than a femtometer, the gluons appear to congregate into a kind of tube, and this tube prevents them from escaping — and that’s what we call a confining string.” An improved understanding of the theory of such strings is a major goal of the collaboration.

Since the 1970s, scientists have been eager to solve the problem of confinement and understand in greater detail the inner workings of the hadrons. Although the effects of confinement have been observed in approximate numerical simulations of QCD, there is currently no universally agreed-upon explanation for how the quarks and gluons are confined inside the baryons and mesons.

“We still don’t understand precisely how these quarks and gluons bind to form the hadrons,” said Klebanov.

The problem of confinement, in fact, is classified by scientists as one of the great unsolved mysteries in physics. In particular, confinement is related to a fundamental and currently unsolved problem called the “mass gap” problem: that the seemingly massless colored gluons, instead of propagating freely, bind into massive colorless objects called “glueballs.” Currently, there is no mathematical proof for this remarkable phenomenon despite its demonstration in numerical simulations. It is such a complicated, thorny issue that the Clay Mathematics Institute of Cambridge, Massachusetts, has designated it one of their Millennium Problems. These mathematical problems have not yet been solved and are considered of fundamental importance in science.

“Over the last fifty years, people have been struggling to understand the true substructure of hadrons in terms of quarks and gluons and precisely why these quarks and gluons cannot escape and be out propagating freely,” said Klebanov. “One of the goals of our collaboration is to take a new stab at understanding the process of confinement.”

The Simons Foundation will fund the researchers for the next four years, and there is a possibility of a three-year extension. The money will cover basic research, including studies carried out by postdoctoral researchers and students. The scientists expect that the research will lead to a flurry of collaborative research.

“The collaboration will be an exciting opportunity to bridge the gap between developments in numerical approaches such as lattice field theory and formal theory and bring these communities together,” said Phiala Shanahan, associate professor of physics at the Massachusetts Institute of Technology (MIT) and one of the collaboration's principal investigators.

The potential for exploring other avenues of fundamental physics during the ongoing research is also high. “Broadly, we want to understand confinement in quantum chromodynamics, but we also want to decipher the so-called exotic hadronic states that have been discovered more recently,” said Klebanov. “They involve more complicated arrangements of quarks than in the hadrons known since the 1960s.”

Klebanov brings considerable expertise and experience to the role of collaboration director. He has worked on string theory, quantum gauge field theory and the Skyrme model of baryons, among other research. He is the author of more than 220 scientific papers and, significantly, is an author of one of the three foundational papers on the Anti-de Sitter/Conformal Field Theory correspondence, which attempts to bridge the relationship between string theory and quantum field theory. In 1998 he co-authored a paper on this subject, “Gauge Theory Correlators from Non-Critical String Theory,” that remains one of the most cited papers in high-energy physics. Klebanov has also helped formulate a similar correspondence for models that exhibit confinement.

”The confinement of quarks and gluons is a profound, yet mysterious aspect of the Standard Model of particle physics,” said Klebanov. “By advancing our understanding of confinement, and putting it in a modern context, the new collaboration will deepen our insight into the fundamental structure of the world around us.”

Universities and research institutions collaborating on the current project include: