This will not be on the test: A new approach to learning quantum chemistry 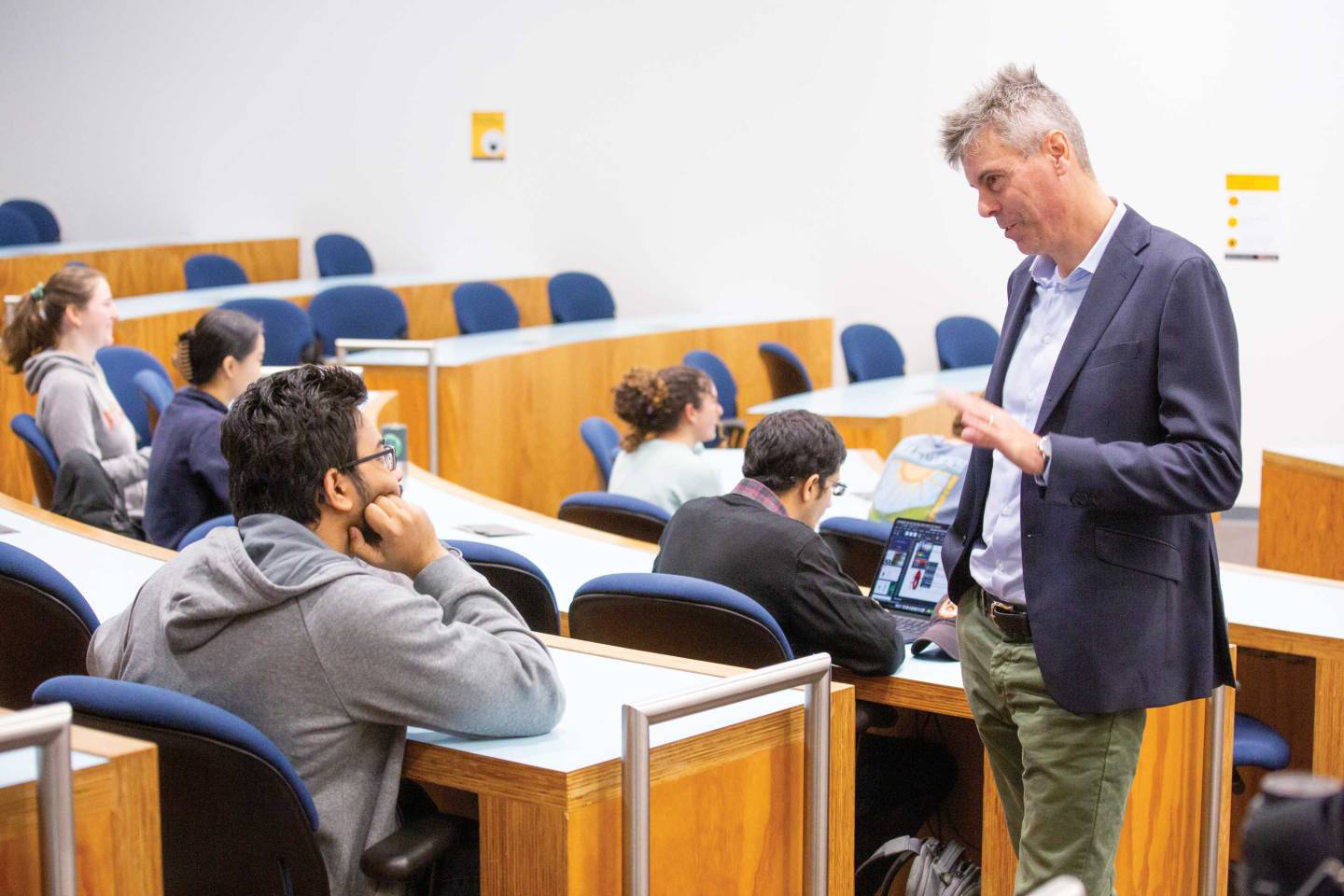 Gregory Scholes targets “The Quantum World” to chemistry students and non-chemists alike. “Whether you’re a future novelist, or going to be working in government or finance ... we need people who can make informed decisions about any kind of quantum technology,” he said.

So a pair of Princeton professors are taking a new tack: Teach the nuts and bolts of quantum mechanics until the midterm, and then no more problem sets, quizzes or tests. The students in “Chemistry 305: The Quantum World” spend the second half of the semester freely exploring the wild implications of quantum theory.

“Instead of having a room full of students worrying, ‘Will this be on the test,’ I want them to have something they’ll be excited to talk about at Thanksgiving dinner,” said Gregory Scholes, Princeton’s William S. Tod Professor of Chemistry and the chair of the Department of Chemistry.

“I joke with students that if your mum asks, ‘What did you learn at Princeton University?’, you’re not going to start deriving an equation, but you could say ‘Well, I finally learned what quantum entanglement means, and here’s how to think about it in two sentences,’” said the Australian-born scientist.

“All Princeton students are fully capable of learning quantum mechanics. It’s just a question of finding the way in,” said Marissa Weichman, an assistant professor of chemistry who for the past three years has taught the key equations and other core material covered in the first half of the semester. After the midterm, Scholes leads the seminar-style discussions. 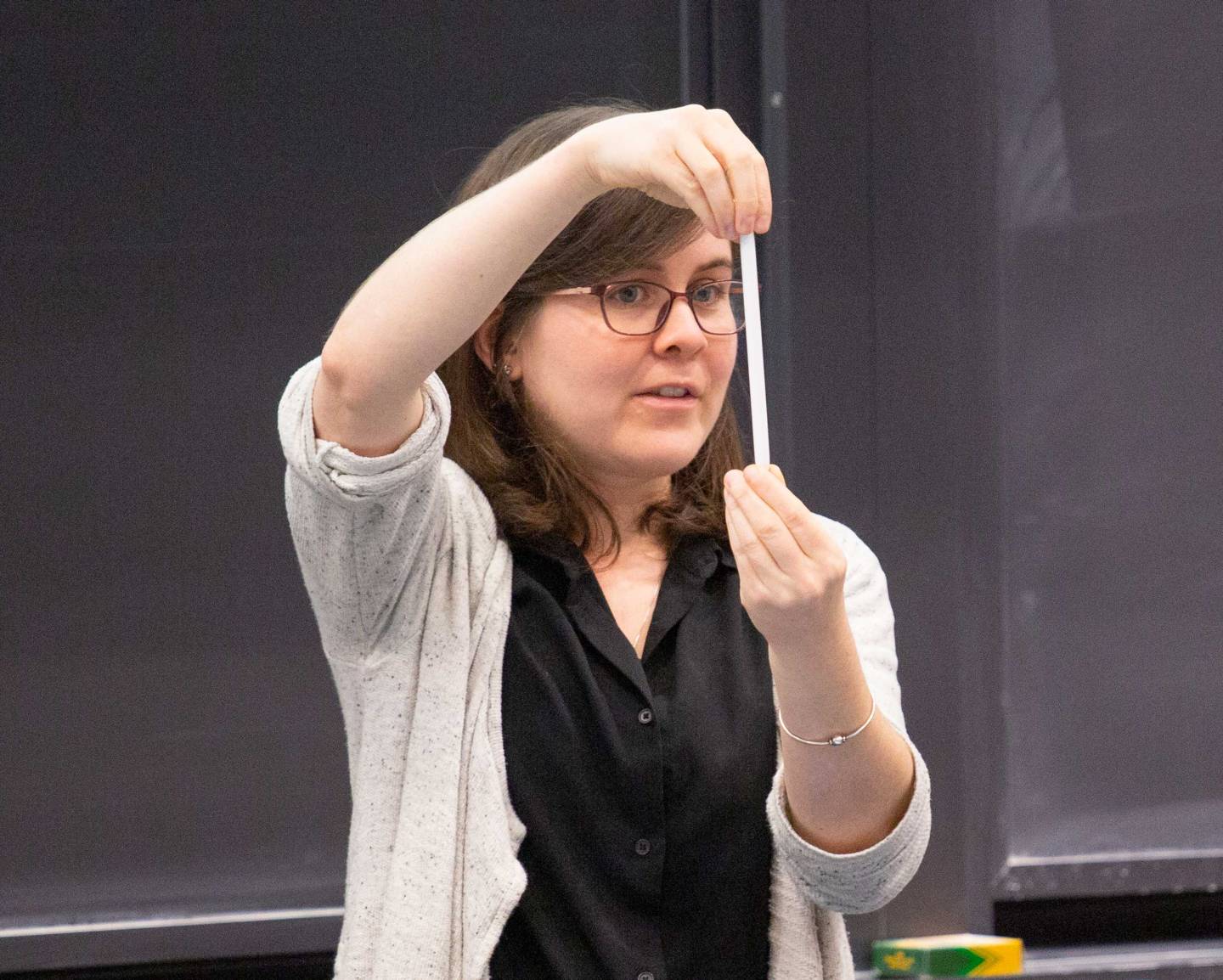 Marissa Weichman, seen here demonstrating a concept during a lecture, teaches the mathematical underpinnings of quantum mechanics in the first half of the semester. “I want students to know that regardless of their math background, they are welcome — more than welcome, encouraged! — to join our class,” she said.

“I found the first half of the course really understandable, which I hadn’t expected,” said senior Maddie Esposito, who is currently enrolled in the class. “‘Quantum mechanics’ sounds pretty daunting, so I was a little apprehensive coming into the course, but Professor Weichman really broke everything down and made it very easy to understand. As we got to the end of the first half of the course, I was starting to see connections between what we were learning — the math and equations — with things I’d heard about in previous chemistry courses. I’m really excited that we get the space to talk about these bigger ideas that are at the forefront of the field.”

Weichman said her secret to teaching quantum mechanics is helping students learn how to trust their quantum intuition.

“When I teach, I tell students, ‘Don’t worry about conceptual understanding right away. Your quantum intuition will come from time spent learning the rules. You have to do the math, and just practice it and practice it until it’s almost muscle memory.’ And then intuition comes, and you can talk start to talk about conceptual problems," she explained.

In the first half of the class, the message is, “Let’s just do the math and try not to worry too much about what it means,” she said. “And then, once that’s somewhat comfortable, we can start to talk about real research problems and applications and what this is useful for.”

Scholes has been tinkering with the course for years, and he said that this no-final-exam approach gives him a chance to discuss the most exciting, cutting-edge developments in quantum research.

“Nanoscience, quantum dots, carbon nanotubes — we can talk about what’s special about them, at a deeper level than you could without the math. Having had the quantitative first half of the semester, they can really appreciate it, and that makes it much more fun, I think. And I can tell them some inside stories too: What was the breakthrough that made the whole nanoscience revolution in this area? What was the conversation in the hallway at MIT that led to these amazing materials?

“If you’re teaching to the exam, then you have to be very precise, even simplistic with everything,” he said. “You can’t leave any open questions, because students want to have very precise answers to anything you could possibly ask them. But that doesn’t work for the really cool stuff. The most exciting things don’t have precise answers yet.

“I can describe the leading edge of research, from my lab or otherwise, in a way that you wouldn’t get at a school without the kind of research faculty we have at Princeton,” Scholes continued. “Some of the top, most engaged quantum researchers in the world are here. And I want to share that fun with the undergraduates. Instead of just saying, ‘Oh, here’s a textbook,’ I want to give them a sense for what are the real questions and issues and breakthroughs."

Sarah Bard, a graduate student who has served as a teaching assistant for the course, said, “The whole dynamic of a class changes when you have a professor talking about something that they really enjoy. That’s part of the fun of being taught by world-class researchers.”

Preparing thinkers for the modern world 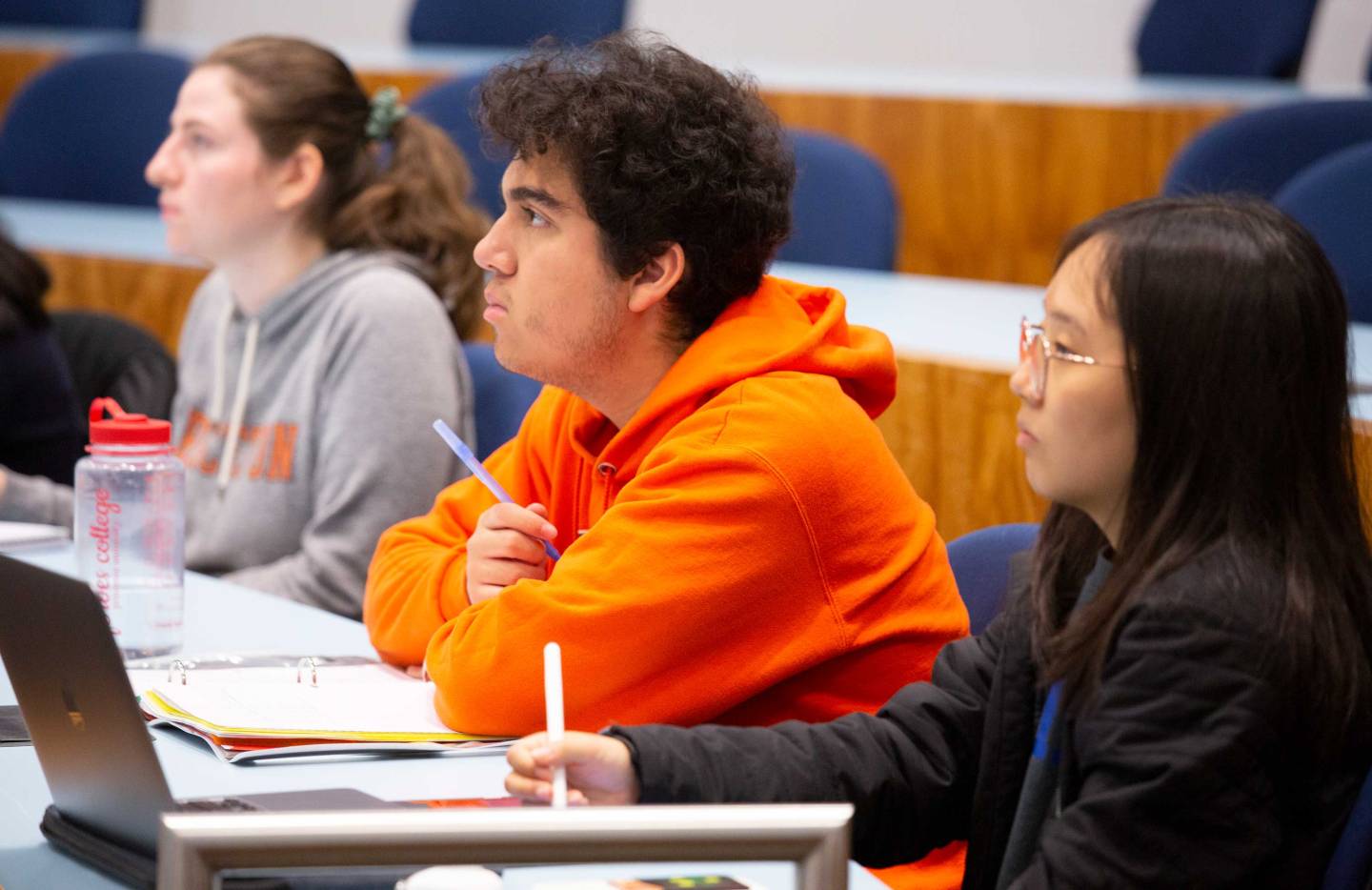 Students in ”The Quantum World” do not take a final exam or any quizzes in the second half of the semester, during which they learn about cutting-edge developments in quantum research.

While the course is recommended for chemistry majors, Scholes and Weichman are well aware that most of their students won’t become physical chemists. But they want to prepare them to make thoughtful decisions about whatever quantum questions the future may hold.

“Quantum computing and quantum security are huge, growing areas,” said Scholes. “I want investment bankers who are thinking about investing $500 million in a quantum computer to know the right questions to ask. I want doctors to be able to follow a sales spiel from a quantum medical device startup company. I want grant administrators to know if a proposal has legs or is something to steer clear of. Just because someone isn’t going to be sitting at a desk solving equations every day doesn’t mean they don’t need to have a deep understanding of this.

“These days, quantum entanglement is even showing up in novels. So whether you’re a future novelist, or going to be working in government or finance — especially finance, because somebody’s got to put money into the quantum technologies of the future — you really need to be informed.”

At heart, Scholes is a theoretical scientist, but he also knows the importance of quantum materials for the world. “It’s the ultimate perfect, pure scientific theory. It’s beautiful,” he said. “But to bring it into applications, into products that will make a difference in people’s lives, we need people who can make informed decisions about any kind of quantum technology.”

To that end, students can choose any topic to present on during the seminar half of the course. Past topics have ranged from avian magnetoreception — how birds use Earth's magnetic field to aid their migration — to the role of quantum mechanics in consciousness and even cancer development.

‘A clean break is critical’

Scholes has taught this course since before he came to Princeton in 2014, and he keeps experimenting with it. Over the years, he has reduced the number of tests and quizzes, but he said the biggest shift came when he both eliminated the final exam and completely separated the two halves of the semester.

“Having a clean break is critical,” he said. “The students are so suspicious. ‘What if he’s really going to put some of this on the test?’ I just don’t want any of the worries. Then we can discuss things freely.”

Some students said that they would have preferred the course without the quantitative grounding — and problem sets! — but most said that the strong mathematical underpinning Weichman provided was vital to getting a solid grasp on the topics raised in the second half of the class.

“I didn't have as much of a background in math as some of the other students in the class, so I tried very hard during the first half of the semester,” said junior Lily Kronenberg. “I think the fear for a class like quantum mechanics is that the math might be too difficult to grasp, but I did not find that to be the case. And then it's nice to have that mathematical understanding, because I don't think that anything in the seminars now would make sense without that grounding in the math.”

“I’ve taken a lot of STEM classes, and this is the first that takes the approach of giving you the technical tools and then talking about the theory, and how we can apply it,” said senior Imani Mulrain. “I like this approach because it gave me more concrete understanding. I think if we had started with the theory, it would have been hard to put it in a framework.”

The lack of a final exam is freeing, said Esposito. “I don’t think I've ever had a course where we just get to talk about science, and we won't be expected to perform on an exam," she said. "Some of my classmates discussed this after our first seminar lecture, just how exciting that was and how rare that was.”

Creating a welcoming environment is vital when teaching such a potentially intimidating topic, said Weichman.

“I’m trying to have as big a funnel as I can, to bring everybody into the fold of quantum — and physical chemistry,” she said. “I want students to know that regardless of their math background, they are welcome — more than welcome, encouraged! — to join our class, and that there are people who will help them and encourage them.”