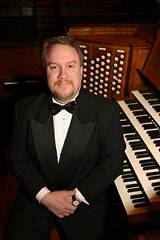 Eric Plutz, a graduate of Westminster Choir College in Princeton, has been named principal University organist at Princeton University. His first Sunday playing in the University Chapel will be Feb. 6, according to Thomas Breidenthal, dean of religious life and of the chapel.

Plutz has been organist and director of music at the Church of the Epiphany in Washington, D.C., since 1995. He oversaw the church's music program, including directing and accompanying a semi-professional choir, and planning and implementing a popular concert series.

Also an organist at Temple Sinai in Washington and accompanist of the Cantate Chamber Singers, Plutz has taught organ at the Selma M. Levine School of Music. He has served as dean of the District of Columbia Chapter of the American Guild of Organists and recently concluded a six-year tenure as keyboard artist of the Cathedral Choral Society and rehearsal accompanist of the Washington Bach Consort.

Plutz has worked as an accompanist with many Washington, D.C., organizations, including the National Symphony Orchestra, the Choral Arts Society of Washington, the American Repertory Singers, the Fessenden Ensemble, the Washington Symphonic Brass and the Washington Ballet. He also has accompanied the Voices of Ascension conducted by Dennis Keene and has worked with conductors Leonard Slatkin, J. Reilly Lewis and Norman Scribner in various venues in the Washington area, including the National Gallery of Art, the Barns at Wolf Trap and the John F. Kennedy Center for the Performing Arts. A seasoned concert artist, he has been invited to play organ concerts in distinguished locations across the United States.

He has been a member of the American Guild of Organists since 1984 and a member of the Association of Anglican Musicians since 1991, and he has served on the Diocesan Commission on Liturgy and Music for the Diocese of Washington. Before moving to Washington, he was assistant organist at St. John's Episcopal Cathedral in Denver, Colo., from 1991 to 1995. He is originally from Rock Island, Ill.