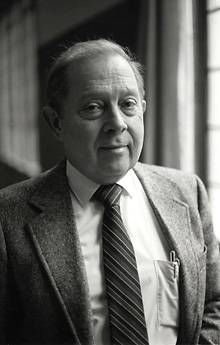 Professor Emeritus of East Asian Studies Frederick Mote, a leading scholar of Chinese history and culture, died Feb. 10 in Aurora, Colo., after a long illness. He was 82.

Mote, a Princeton faculty member from 1956 to 1987, was one of a small number of academic pioneers who were instrumental in transforming the study of China and East Asia in the United States into a mature field with high standards and a distinguished record of scholarly achievement. At Princeton, he played a major role in the development of the Department of East Asian Studies and is remembered by his colleagues and students for his broad knowledge and wise counsel.

"Professor Mote influenced and enriched the field by his erudition, his farsightedness and his constructive criticism. He influenced his students by his love, his humor and his thoughtful guidance. He is truly a scholar, a historian and a gentleman," said Hung-lam Chu, who received a Ph.D. from Princeton in 1984 and is now a professor of history at the Chinese University of Hong Kong.

Mote became a student of Chinese history and culture after enlisting in the U.S. Army Air Forces in 1943. He was sent to a military unit at Harvard University and trained under two prominent Sinologists. He went to China in 1944 as a noncommissioned officer in the Office of Strategic Services. After World War II ended, he returned there and became one of the first Westerners to enroll as an undergraduate at the University of Nanjing, where he earned his bachelor's degree in 1948 in Chinese history.

Mote continued his studies at the University of Washington-Seattle, and received his Ph.D. in Sinology in 1954. After spending the 1954-55 year as a postdoctoral researcher at National Taiwan University and the following year as a Fulbright Exchange Lecturer at the University of Leiden in the Netherlands, he was appointed an assistant professor of Chinese history and civilization at Princeton in what was then the Department of Oriental Studies. He was promoted to associate professor in 1959 and to full professor in 1963. He twice received Guggenheim Fellowships.

Mote spent his early years at Princeton working with others to establish a rigorous Chinese language program and to improve the facilities and expand the holdings of the Gest Oriental Library. He and his colleague, Marius Jansen, a specialist in Japanese history, were key figures in the growth of East Asian studies at Princeton in the 1960s and 1970s. They secured financial support from the John D. Rockefeller and Ford foundations in 1961, the Carnegie Corporation in 1963 and the U.S. Department of Education in 1965.

That support enabled the University to acquire a wealth of new materials for the Gest Library, to establish a highly-regarded Chinese linguistics program -- which Mote directed from 1966 to 1974 -- and to add a number of new East Asian specialists to the faculty. The Department of East Asian Studies was established at Princeton in 1969.

Beyond Princeton, Mote was active in many organizations, including the Committee on Scholarly Communication with the People's Republic of China, of which he was a founding member; the Committee on Studies of Chinese Civilization of the American Council of Learned Societies, which he chaired from 1974 to 1978; the Smithsonian Council; and the Visiting Committee of the Freer Gallery of Art. From 1963 to 1965, he served as an adviser to Thailand's Ministry of Education.

Mote's scholarship focused on the political and social history of the later imperial era, with special reference to the Yuan and Ming dynasties. He wrote, edited and translated numerous books, scholarly articles and essays on subjects ranging from classical Chinese philosophy to military history and from studies of great Chinese cities to ways in which poetry, painting and other arts could be used to gain a fuller understanding of Chinese economic, social and cultural history.

He was involved in the planning and editing of the Cambridge History of China and wrote 23 entries on Ming history for the Cambridge Encyclopedia of China. His final book, "Imperial China 900-1800" (Harvard University Press, 1999), was based on a lifetime of reflection and provides a comprehensive survey of this period of Chinese history.

Hung-lam Chu, Mote's former student, also said of his adviser, "His accomplishment in integrating Chinese classical, historical, philosophical, literary, language and artistic learning for an in-depth understanding of traditional Chinese culture for a better understanding of the problems facing modern China is unique and unsurpassed. His use of poetry and literary collections for the study of the mind and sentiment of 14th- to 17th-century Chinese literati and the political and social milieu in which they lived has attained a level of achievement that his peers could only hope to have had. His last book, 'Imperial China 900-1800,' will stand as a classic of sustained learning, consummate scholarship and insightful commentary to inspire the student of Chinese history and culture for a better appreciation of China's past and a better understanding of China's present."

Students and colleagues alike spoke of Mote's generosity in sharing his broad knowledge of China. "Everything he wrote was grounded in the sources, all at his finger tips, recallable without reference to notes," said Norman Itzkowitz, professor emeritus of Near Eastern studies, who remembered first meeting Mote as a junior colleague -- although "he never made those age and academic hierarchy distinctions" -- and soon regarding him as a valued friend. He added, "Fritz will live forever in the hearts and minds of all those who had the great, good fortune to know him."

"As a principled intellect and a warm-hearted teacher, Fritz Mote helped broaden my vistas on Sinology and history and sharpen my methodological and research skills," said Hok-lam Chan, who earned a Ph.D, from Princeton in 1967 and is now a faculty member at the University of Washington and the Chinese University of Hong Kong. "For this and his professional guidance, I am deeply indebted to him. He left a durable legacy of scholarship remarkable for its critical assessment, but deep love and respect of Chinese civilization, and he will be sorely missed by his students, colleagues and friends."

Mote is survived by his wife, Ch'en Hsiao-lan of Granby, Colo., a sister and six brothers. Memorial services were held in Beijing on Feb. 15 and in Taipei on March 5. A memorial symposium in Princeton is being planned for the fall and will feature a series of panel discussions on issues in Chinese history and culture.