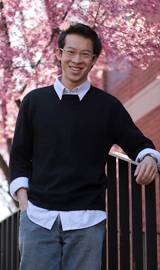 Eleven sophomores are winners of this year's Dale Summer Fellowships, which provide a $3,000 stipend to pursue a summer project not connected to their academic coursework. The recipients and the titles of their projects are:

• Nelson Chiu, "Journey to My Roots."
• Sarah Erickson, "Atget's Paris of the South."
• Christina Gamba, "Art of the Heart."
• Liisa Hummal, "People Who Are Not Shown Will Be Forgotten."
• Marisa Reisel, "Discovering a Visual Language."
• Christian Sahner, "In the Footsteps of Benedict Biscop and Ceolfrith: Travelers and the Romanization of Art in the Early Medieval British Isles."
• Leizhi Sun, "Drawing From Nature in Western China."
• Uma Tadepalli, "The Folk Dances of Northern India."
• Andre Veiga, "The Great Ghandian Trip."
• Joshua Williams, "Provoking Hope: Community-Based Theater for AIDS Education in Urban and Rural Kenya."
• Nahal Zebarjadi-Sar, "Conversations From Inside and Out: The Crises of Iranian Youth and How to Imagine a Future."

Senior Kyle Meng describes the opportunity to spend a year studying Chinese perceptions of their environment as "the perfect confluence."

Meng will combine interests in his native country, environmental engineering and public policy next year as the 2005 recipient of the University's Martin Dale Fellowship.

The $25,000 Dale fellowship is awarded annually to a graduating senior to allow him or her "to devote the year following graduation to an independent project of extraordinary merit that will widen the recipient's experience of the world and significantly enhance his or her personal growth and intellectual development." Meng's project is titled "Unearthing the Dragon: Understanding How the Chinese Perceive Their Environment."

"The Dale fellowship is an unbelievable opportunity, and I'm still in a state of disbelief that I've been fortunate enough to receive it," said Meng, who is majoring in civil engineering with a focus on environmental engineering.

Now a resident of Chappaqua, N.Y., Meng emigrated to the United States from China when he was 6 years old to join his parents, who had moved here to pursue advanced degrees. While the family decided to stay in this country, the Chinese culture remained a significant part of their lives. Meng grew up speaking Cantonese and English, and has taken Mandarin at Princeton. He has returned to China with his family several times to visit relatives.

Last summer, Meng lived in Beijing and worked at the Tsinghua-BP Clean Energy Research and Education Centre. He conducted research on carbon dioxide emissions for his senior thesis, titled "Identifying Opportunities for Carbon Capture and Storage Demonstration Projects in China."

Carbon dioxide, which comes predominantly from burning carbon-based fossil fuels such as oil, natural gas and coal, is considered the main contributor to greenhouse warming. Scientists are interested in capturing the carbon and sequestering it underground to prevent global emissions from rising. Meng and his advisers, Michael Celia, professor of civil and environmental engineering, and Robert Williams, senior research scientist in the Princeton Environmental Institute, will present findings from this project in early May at a conference sponsored by the U.S. Department of Energy in Washington, D.C.

While pursuing his engineering degree, Meng also has explored the arena of public policy in his academic and extracurricular work. He is earning a certificate in environmental studies, through which he has studied the political and humanistic -- as well as the scientific and technological -- aspects of environmental problems.

He has served as president of the Global Issues Forum, a student organization dedicated to improving the understanding of global affairs on campus. He organized a faculty-student China symposium that featured a keynote address by the Chinese ambassador to the United Nations as well as fund-raisers for relief efforts in war-torn Darfur, Sudan, and for tsunami victims in Southeast Asia. He spent the summer of 2003 in Thailand working as an intern with the International Rescue Committee.

Meng also has other diverse interests. He has played classical piano for 18 years, frequently performing at Princeton, and is completing a second certificate in music performance. In addition, he contributes biweekly columns on a variety of topics related to the Princeton experience to The Daily Princetonian student newspaper.

As he looks beyond graduation, Meng sees himself combining his passions for engineering and public policy. "I decided to be an engineer for the benefits of a technical background," Meng said. "But I'm now interested in applying that training into policy and service oriented work."

The Dale fellowship represents a significant step toward that goal, and Robert Williams, his thesis adviser, believes Meng will be successful in this endeavor.

"Although Kyle's primary training is in environmental engineering, I am confident that he can make an outstanding contribution in the area of his proposed research because of his keen intellect, his passionate love of both China and environmental problem solving, his strong writing and interpersonal skills, and the talent he demonstrated to me, as an adviser for his senior thesis, in learning what he needs to know outside of his field of basic training in order to solve a problem," Williams said. "Also, in the environmental analysis field I am constantly on the lookout for students who can both understand in detail technical aspects of an environmental problem and appreciate the broader societal and public policy issues. Kyle is one of those rare students who has the potential for doing both well."

The idea for the Dale fellowship project jelled while Meng was in China last summer. Through his research on reducing carbon dioxide emissions, he experienced firsthand the resistance to dealing with such issues and observed an environmental movement that is struggling to gain momentum.

He said that the Chinese government, under increasing international pressure, has become more environmentally friendly in its rhetoric. However, Meng noted, environmental regulations are rarely enforced locally.

"Overwhelmed by pressures to develop, local governments often neglect the principles of sustainability, conservation and accountability in order to achieve economic growth," Meng wrote in his Dale proposal. "Instead, what has proven to be the greatest impetus for change have been the Chinese people … [who] have protested successfully against polluting businesses and corrupt government officials. If change will come most effectively through a grassroots movement, it is highly important that we understand just how the Chinese perceive their environment."

He plans to focus primarily on how perceptions have changed in light of China's recent development and how they differ across China's geographical, socioeconomic and generational divides.

Meng has already begun his project by starting to familiarize himself with the relevant scholarship -- in English and Chinese -- on the topic. Once in China, he will collect qualitative and quantitative data through fieldwork and interviews. While in Beijing last summer, he contacted Professor Qi Ye, an expert on Chinese environmental policy in the School of Public Policy and Management at Tsinghua University. He will serve as Meng's mentor, helping him to gain access to government officials, environmentalists and members of nongovernmental organizations.

Meng plans to travel extensively, obtaining much of his information on perceptions about the environment from the people of China. "Much of my research will be done through conversations," he said.

Although excited by the thought of what's ahead, Meng said that he's also a bit daunted by his undertaking. Much of his work will be planned as he goes along, which he admits is somewhat unsettling.

"I feel fortunate because with the Dale fellowship I'll have so much freedom to explore and not be confined to a certain institution or a course of direction," he said. "But at the same time I know that with so much freedom I will be making decisions as things unravel and might even feel lost for a good portion of my time in China."

However, Meng said that he is looking forward to the opportunity for some additional self-discovery next year. "I've had so much exposure to so many things at Princeton," he said. "It's important for me now to sort out these experiences and to take time to internalize these new elements into my life."

He expects that graduate school will be part of his future plans and also has "a sense that China and the environment will play a very big role in my life."