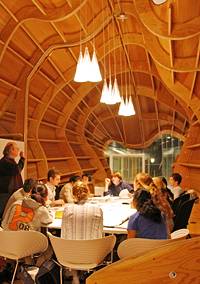 A room-sized sculpture by architect Frank Gehry provides a unique setting for classes within the Icahn Laboratory. The sculpture, which consists of a wood frame sheathed in metal, sits in the atrium of the lab and was a gift of alumnus Peter Lewis. Here, Daniel Marlow, professor and chair of physics, teaches an evening review session for a new freshman course that integrates biology, physics, chemistry and computer science into a single curriculum.

At left: The Icahn Laboratory, as seen from Poe Field, offers one of the most striking architectural views on the Princeton campus.

Princeton's Lewis-Sigler Institute for Integrative Genomics was established in 1998 under a mandate to develop new approaches to studying and teaching modern biology, with a high degree of collaboration between scientists from many departments.

The institute is led by David Botstein, whose research interests are in genetics and genomics. Shirley M. Tilghman, now president of Princeton, was its first director. The institute's resident faculty includes members of the physics, chemistry, computer science, chemical engineering and molecular biology departments.

The institute was endowed through a gift from Peter B. Lewis to honor his friend and Princeton roommate, Paul B. Sigler (both are members of the class of 1955). It is housed in the Icahn Laboratory, a striking building designed by Rafael Viñoly Architects of New York. The construction of the building was funded by a gift from Carl Icahn of Princeton's class of 1957.

The institute has a unique endowment that supports exceptional young experimental scientists (recent Ph.D.'s) as Lewis-Sigler Fellows. The fellowship funds their independent research at the institute for five years, during which time they participate in the design of the institute's innovative teaching programs.

The institute has generated several curricular innovations, including the Program in Quantitative and Computational Biology, which was established in 2003 and serves as an intellectual hub for graduate education in quantitative biology at Princeton. The program includes 68 faculty members from 11 different departments. At the undergraduate level, a new course aimed at preparing students for majors in any of several science departments (including physics, chemistry, computer science, mathematics and molecular biology) was offered for the first time in the fall of 2004.

One of the goals of the Lewis-Sigler Institute is to foster interdisciplinary research programs and to provide research infrastructure for them. The Center of Excellence in Quantitative Biology, which was established in 2004 through funding from the National Institute of General Medical Sciences, focuses on the application of genome-scale technologies, mathematical modeling and modern molecular imaging.