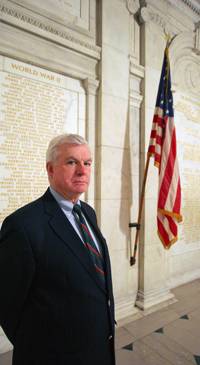 After 30 years of service in the U.S. Army, Paul Miles completed his Ph.D. at Princeton at the age of 61 and joined the University’s history department as a lecturer.

Although this career switch, at first glance, may seem abrupt and delayed, it is because of — rather than in spite of — his extensive first career that he has become such a successful teacher of military and diplomatic history.

After his first tour of duty in Vietnam in 1965-66, Miles served as aide de camp to then Army Chief of Staff General William C. Westmoreland and dealt with strategic issues and political-military affairs. When he returned to Vietnam in 1973 for his second tour, he gained diplomatic experience as a member of the U.S. military delegation at the Paris Conference on Vietnam. In that capacity, Miles dealt with issues such as the mechanics of the cease-fire, the return of the American prisoners of war and the missing-in-action problem.

“You have the actors in a policy-making position and you have the intellectuals analyzing [the policies]. Dr. Miles has been both. So I think he understands both sides,” said Jared Keating, for whom Miles served as a senior thesis adviser this year. “He definitely has the knowledge and curiosity of an intellectual, but he also has the experience and pragmatism of someone coming from the real world.”

Jeremy Adelman, chair of the history department, explained it differently: “I think having a perspective as an insider gives you a sense of the complexities and the nuances of how things happened in the past that for outsiders it takes a hard time to really come to grasp. On the other hand, there is a problem that insiders often have, and that is that they have a hard time getting perspective. Paul Miles has the advantages of being an insider without the disadvantages. He has a distance on his subject but at the same time understands the subject. He’s a scholar. He’s not just a doer. He’s an analyst. He can stand back.”

From West Point to Princeton

Miles earned his bachelor’s degree from the U.S. Military Academy, then studied at Oxford University as a Rhodes Scholar, earning a master’s degree in modern history. After Army assignments in Vietnam and Washington, D.C., he returned to West Point to teach from 1979 to 1990. For eight of those years, he directed the academy’s Program in International and Strategic History.

Miles retired from the Army as a colonel in 1990, and returned to Princeton to finish the doctorate he had started here in 1977. He had completed his coursework in 1979, and needed to write a dissertation. While researching “FDR’s Admiral: William Leahy and the Making of Grand Strategy in World War II,” he worked part time — directing Temple University’s Center for the Study of Force and Diplomacy and serving as a visiting lecturer at Princeton.

Miles received his doctorate in history from Princeton in 1999 and was appointed a lecturer. From 2001 to 2004, he was the first holder of the Norman Tomlinson Fellowship in War and Society. Last year, he received the Phi Beta Kappa Teaching Award from Princeton’s chapter of the academic honor society.

Miles said that working with Princeton students has kept him feeling young. “Here I am at a time when most of my colleagues in the military — either my age or older — are either retired or semi-retired, playing golf at Hilton Head,” he said. “Even the ones who are semi-retired spend most of their time working with people of their generation. And here I am working with this young generation, which I find stimulating, reinvigorating.”

Miles is perhaps best known among students for his course, “The United States and World Affairs.” Since he has been teaching it, enrollment has ballooned, and it is now one of the most popular courses in the University.

He also has created new classes, all of them in the field of military and diplomatic history: “The United States and the Vietnam Wars,” “The Cold War as International History” and “The Mighty Endeavor: The United States in World War II.”

“I think he’s one of the best lecturers in the school just in terms of the content and the delivery,” Keating said. “His lectures were just always really entertaining and extremely informative.”

“His lectures were well-organized, and he’d bring in a lot of visual aids and [film] footage to emphasize his points,” added Luke Mawhinney, who also graduated this year.

Though a former military man and strategic planner with his own opinions, Miles insists that his students formulate their own thoughts about America’s foreign policy and military operations. “It’s never that he’s impressed his opinion on anyone,” Keating said. “He provokes curiosity in all his students out of how he frames issues, placing them in context and forcing you to think about them.”

In addition to serving as his senior thesis adviser, Miles worked with Keating on his spring-term junior paper, “John Kerry and the Vietnam Anti-War Movement,” which examined Kerry’s anti-war activities following his service in Vietnam. Keating was tackling this assignment during the 2004 presidential campaign. When the Swiftboat Veterans for Truth television ads aired, Miles “as always was able to shield any of his personal thoughts on any of it and just guide me to do my own work,” Keating recalled.

As much as Miles empowers his students to do their own thinking, he won’t hesitate to let them know when their arguments are far-fetched. “He’s not unique in that regard, but it’s not that common, and I do appreciate it,” said Joseph Holliday, a rising senior majoring in history who had Miles for “Cold War as International History,” one of several junior seminars for history majors.

Miles himself articulated what he strives to give his students: “I want them to have some historical perspective on some very fundamental issues about war and peace and more precisely the conduct of war, because I think the study of the conduct of war — not only its military but also its political and social dimensions — is relatively neglected within American academe. Even my fellow historians — diplomatic historians — tend to neglect the conduct of war. They will spend a lot of time on the origins of war. And then they’ll skip over the war and discuss consequences of the war. And laying aside diplomatic historians, even historians of modern America will do the same thing.”

Miles certainly has read enough to give his students this historical perspective. “When you go talk to him about a topic you might be interested in, he’ll rattle off 10 or 15 books immediately that you should look into,” said Holliday, who this past year wrote his fall-term junior paper under Miles’ guidance. “He’s just really impressive — just generally knowledgeable on pretty much everything. He’s very directive, and then he’s also receptive to you changing that.” Miles’ guidance, he said, improved his work and kept him pointed in the right direction.

Miles is a presence not only in the classroom and in his office but throughout the rest of the campus as well. He is a freshman adviser in Mathey College. He helped Mawhinney start the Military History Book Club and has served as its adviser for the past three years. As a faculty fellow for the lacrosse team, he has watched Keating and his teammates play and has served as their academic liaison. After Miles heard that Holliday was in Army ROTC, he gave him a copy of Roger H. Nye’s “The Challenge of Command: Reading for Military Excellence.” “It meant a lot to me,” said Holliday, who noted that Miles is one of the officers quoted in the book.

Reflecting on his two careers, one in the military, the other in academe, Miles said, “I’ve been very pleased with the way my career in some ways evolved. And particularly since … it didn’t unfold in any kind of — let us say — systematic fashion or in accordance with any grand design. I’ve always thought that that was a little ironic because of my interest in strategy. What’s strategy all about? Long-term planning. So here’s someone who studied strategy and taught strategy and yet whose career, as I said, evolved in a rather unpredictable — perhaps even at times somewhat erratic — fashion. I wouldn’t necessarily recommend to young friends that they try to follow my example. On the other hand, I have no regrets about how this particular path unfolded.”

Nor, it seems, do his students. Keating said, “He has probably been the one most major part of my experience here academically. So I owe a lot to him.”