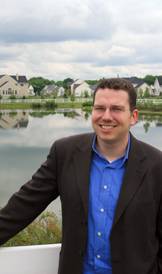 Kevin Kruse, who joined the history department faculty in 2000, has found the suburbs a rich source of fodder for his studies of the political and social history of 20th-century America and the making of modern conservatism.

Growing up in the South, Princeton historian Kevin Kruse was fascinated by the civil rights movement. But the villains of the stories he heard — the cross-burning Klansmen and the club-wielding police officers — just didn’t resonate with him.

“I never recognized the white Southerners,” said Kruse, who was raised in Nashville. “The bulk of white people may have opposed civil rights, but not all of them opposed it in such a bloody and brutal way. There had to be more to the story.”

His interest in the topic led him to study segregationists in depth when he went to Cornell University graduate school, after earning a history degree from the University of North Carolina. “I was trying to find the people I knew in a story I knew well, not just the flat two-dimensional racists that everyone today would recognize as ridiculous.”

Kruse went on to write his dissertation on segregationist strategies and ideologies in Atlanta. His work grew into a groundbreaking book, “White Flight: Atlanta and the Making of Modern Conservatism,” published last year by Princeton University Press. It describes how segregationists moved to the suburbs and cast aside their racist demagoguery in favor of a new kind of separatist philosophy that, Kruse argues, led to the ascendancy of the Republican Party and a transformation of American politics.

At first glance, Atlanta might not seem the right place for Kruse’s study. During the civil rights era, the Georgia capital was known as “the city too busy to hate.” It was home to Martin Luther King Jr. and a host of other black leaders. Racial integration in the public sphere — parks, pools, buses and schools — occurred there without the kind of violence that made other Southern cities like Birmingham, Montgomery and Selma infamous. This lack of resistance is often seen as evidence that the segregationists were defeated, but Kruse insists this was not the case.

Instead of fighting and facing the risk of being labeled as racist, many whites retreated to the suburbs and “created the Atlanta of which the city’s segregationists long dreamed,” Kruse writes in his book. A new nickname was earned: “the city too busy moving to hate.”

Once ensconced in the suburbs, white southern conservatives began to develop a new language of separatism that stressed their own “individual” rights: the right to be left alone, the right to do as they wished with their property, the right to decide where their children went to school.

In the South, many conservative causes — such as the tax revolt, privatization of public services and tuition vouchers – were first advanced by those opposed to integration, according to Kruse. “Under the auspices of segregation, public places were for whites only, and whites thought of them as their birthright; they had no problem paying taxes to support things like public parks and public pools,” he said. “When integration came and they were forced to share these places with African Americans, segregationists became much more hostile to the idea of using tax money to support public places. In countless ways like this, they experienced a shift away from the public sphere, toward privatization, toward lower taxes.”

Kruse’s book is significant because it challenges the common assumption that the “white flight” seen in Atlanta and elsewhere was little more than a relocation of whites to the suburbs. He shows how these white southern separatists spawned a new suburban-based conservative movement that catapulted to power — with its talk of smaller government, property rights and “quality of life.”

“On the surface (these) policies appear to have little to do with the forgotten struggles over segregation,” Kruse writes in “White Flight.” “Upon closer examination, however, much of the modern suburban conservative agenda — the secessionist stand towards the cities, the individualistic outlook, the fervent faith in free enterprise and the hostility to federal government — was, in fact, first articulated and advanced in the resistance of southern whites to desegregation.”

Kruse’s book has won praise in the mainstream press — it was a New Republic holiday pick last year — and from fellow academics. Harvard history professor Lizabeth Cohen explained why Kruse’s work is so extraordinary. “Most of the studies of the racial politics of suburbanization have focused on the North and West,” Cohen said. “Somehow the South is assumed to have always been a suburbanized and segregated Sunbelt, a notion that Kruse proves to be completely wrong. Rather in his book, we watch him trace in fascinating detail just how Atlanta became suburbanized and segregated, neighborhood by neighborhood, block by block.”

Renowned Southern historian Dan Carter of the University of South Carolina called “White Flight” a “powerful and compelling” book. “I think his account of the way in which the politics of race reshaped white middle- and working-class attitudes towards the ‘public sphere’ (and the taxes necessary to support it) is one of the most important contributions yet made by historians to our understanding of the growth of Sunbelt suburbia and the triumph of the anti-government, anti-tax conservative agenda,” Carter said. “I regard that as high praise for a young scholar who only received his Ph.D. a few years ago.”

Kruse joined the Princeton faculty in 2000, immediately after earning his Ph.D. from Cornell. “He just stood out from the crowd,” recalled Jeremy Adelman, chair of the history department. “From the first time we read the dissertation, we knew we were dealing with an exceptional historian. And he’s turned into exactly what we hoped: a bold and pioneering emerging star in his field.”

Kruse, who will be promoted to associate professor July 1, has continued to focus on contemporary politics and urban/suburban history. Two years ago, he brought together a group of cutting-edge historians to discuss suburbia in America; these presentations have been collected into “The New Suburban History,” which was edited by Kruse and Thomas Sugrue of the University of Pennsylvania and will be published this summer by the University of Chicago Press. This spring, he organized another conference at Oxford University called “Mobilizing the Movement: Civil Rights and the Second World War,” and these papers soon may be published as well.

Kruse also is working on another book, “One Nation Under God: Cold War Christianity and the Origins of the Religious Right.” It continues his investigation into the making of modern conservatism. “The argument I’m exploring is that even though the religious right doesn’t appear on the public radar until the 1970s, it really developed in the late 1940s and 1950s, and it comes out of the way in which military industrial suburbs got their livelihoods from military bases or defense contractors. These suburbs had a real investment in the Cold War. And they, more than anyone else, adopted the religious nationalism of the Cold War.”

Kruse pointed out that during this time the words “under God” were added to the Pledge of Allegiance and “In God We Trust” became the nation’s motto. “All this came about as a result of this identity crisis that America had in trying to define itself as being diametrically opposed to the godless Soviet Union,” he said. “There was this new level of public religiosity, this sense that the nation could not survive without religion.”

Kruse’s interest in conservatives began at Montgomery Bell Academy in Nashville, one of the South’s elite private schools, which Kruse, the son of a homemaker and an accountant, attended on a scholarship.

Once in college, Kruse, who excelled in school, decided he wanted to be a teacher. At Princeton, he leads an undergraduate lecture course, “The United States Since 1920”; a documents-intensive course for sophomores, “Approaches to American History”; a junior seminar; and a number of graduate seminars.

Kruse said his research has had a big impact on his teaching. “For the lecture course, I talk about the backlash to the civil rights movement and the dynamics of urban decline and suburban rise, both of which draw on my research for ‘White Flight.’” He said his new work has also come up in his graduate seminars and will be featured this fall in a freshman seminar on the religious right.

Students give his classes high marks. “Professor Kruse has been the most influential professor I’ve had in my Princeton career,” said Elizabeth Harvey, a member of the class of 2006 who majored in the history of science. “When asking around for junior seminar instructors, almost every person I talked to told me I had to get into Professor Kruse’s seminar. And it was, by far, the best course I’ve taken at Princeton. Professor Kruse doesn’t just force you to engage in the subject matter, he forces you to engage with each other. He promoted discussion and conversation, rather than individual people talking directly to the professor.”

Kruse said he is thrilled to be contributing to a department with such a distinguished tradition. “Coming here is like being drafted by the Yankees,” he said. “To walk into a department full of legends both past and present is really humbling.”