Princeton is home to significant archive of medieval art 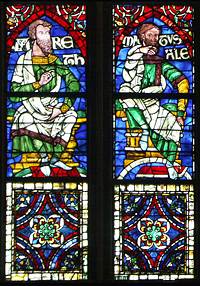 This photograph of 12th-century stained glass windows in England's Canterbury Cathedral is part of the Index of Christian Art, a vast archive of medieval art housed at Princeton. A new collection of stained glass images taken in Europe before World War II will be unveiled on the index's Web site later this week. (image courtesy of Colum Hourihane)

This photograph of 12th-century stained glass windows in England's Canterbury Cathedral is part of the Index of Christian Art, a vast archive of medieval art housed at Princeton. A new collection of stained glass images taken in Europe before World War II will be unveiled on the index's Web site later this week. (image courtesy of Colum Hourihane)

At left: Also cataloged by the Index of Christian Art is "Noah Leaving the Ark," an image from "Chronique Universelle," a manuscript owned by the Morgan Library. The manuscript, possibly Flemish or French, is from the late 15th century. (image courtesy of Morgan Library)

Below left: This fragment of a sarcophagus is part of a collection at the Musée de l'Arles Antique in France and part of the index's archive. Dating to the fourth century, the piece portrays several Biblical stories, including, from left, the arrest of Peter, the Good Shepherd and an unknown woman praying. (image courtesy of Colum Hourihane)

The Index of Christian Art, which makes its home at Princeton University, is one of the most important archives of medieval art in existence and the most specialized resource for the iconographer.

• Housed in McCormick Hall, the index was founded by Professor Charles Rufus Morey in 1917. It records works of art produced without geographical limitations from early apostolic times up to A.D. 1400. Special projects involving Princeton's Firestone Library and the Morgan Library in New York extend the holdings to A.D. 1550.

• A total of 17 different media are represented in the archive, including manuscripts, metalwork, sculpture, painting and glass.

• At the time of Morey’s death in 1955, the index had a collection of some 500,000 cards and slightly fewer than 100,000 photographs. The index presently can provide access to complex information on approximately 200,000 photographic reproductions of Christian art. About 5,000 new works of art are added every year to the archive.

• The computerization program of the index was established in 1991. The Internet database now contains more than 50,000 works of art records that are accompanied by more than 120,000 images in color and black and white.

• Each year several thousand scholars use the index, either visiting it in person or online. While access to most of the collection is through subscription, some images are available to the public online. These open-access records include the Mills-Kronborg Collection of Danish Church Wall Paintings and four bibliographies for the study of medieval art. Later this week, the Gertrude and Robert Metcalf Collection of Images of Stained Glass will be available online. The Metcalfs traveled throughout Europe before World War II, photographing stained glass before it was secured for safekeeping or destroyed in the war. The collection includes 11,000 slides of their work.

• For most of its history, the index has focused on the art of the Western world. Over the last five years, however, there has been an increasing interest in medieval art of the Near East. This past April, the index sponsored a conference on campus titled "Artistic Interchange Between the Eastern and Western Worlds in the Medieval Period." Future conferences are planned on Spanish art in April 2006 and on the Romanesque in November 2006.

Conference to focus on medieval arts of the Near East, April 8-9