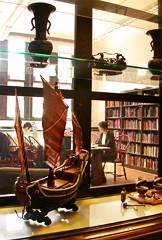 The Gest Collection, one of the Western world's greatest compilations of Chinese books, is part of the East Asian Library (pictured here through a showcase containing East Asian artifacts) in the Frist Campus Center and Jones Hall. Photo by Denise Applewhite

The University's East Asian Library, located in the Frist Campus Center and Jones Hall, was built around the original Gest Oriental Library Collection.

• The collection was founded by Guion Gest (1864-1948) and I.V. Gillis (1875-1948). Gest was head of the Gest Engineering Co., which did business in Asia during the early 1900s. On one trip to China, he met Gillis, who was a naval attaché at the American embassy in Peking. Gest suffered from glaucoma, and Gillis persuaded him to try an old Chinese eye remedy. Although this medicine did not cure the glaucoma, it gave Gest some temporary relief and led him to commission Gillis to buy Chinese books on medicine for him.

• Gest later extended his interest to other fields and for 30 years impoverished himself to provide Gillis with the funds required to indulge his love of books. Gillis, who was married to a Manchu princess, had access to upper class Chinese families in the 1920s and was well positioned to collect many works from them. In the end, Gest's library numbered some 100,000 volumes.

• With Gest's funds dwindling and no place to store the volumes, it was arranged for the collection to become an official library in 1926 as part of McGill University in Montreal.

• In 1937, the Institute for Advanced Study in Princeton, with help from the Rockefeller Foundation, acquired the Gest Library and housed it in a building at 20 Nassau St. owned by Princeton University. In 1948 the institute transferred custodianship to the University, and the collection was moved to Firestone Library.

• It is considered one of the Western world's greatest Chinese collections and includes, among other treasures, several thousand fine and rare editions that were printed before the Gutenberg Bible, as well as one of the world's three complete sets of the original 1728 edition of a famous 5,000-volume Chinese encyclopedia. The collection's 2,000 volumes on medicine constitute the largest collection of traditional Chinese medical books outside China and Japan. As part of the East Asian Library, the collection is complemented by significant holdings of Japanese and Korean materials.