Among Princeton's "secret" gardens is Wyman Garden, near Procter Hall at the Graduate College. It was designed in the early 1900s by Beatrix Jones Farrand, the University's first consulting landscape architect and a powerful force in shaping the look of the campus. European hornbeam covers an arbor along one side of the garden. 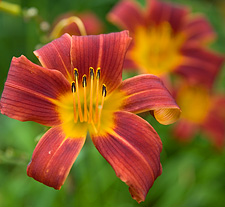 Daylilies flourish in a garden on campus.

In summertime Princeton's campus thrives with fragrant, colorful flowers, verdant stretches of lawn and lush, leafy trees. Tucked away in lesser-traveled areas of the campus are some little-known gardens where the foliage is blossoming and the benches often are empty. All are open to the public. 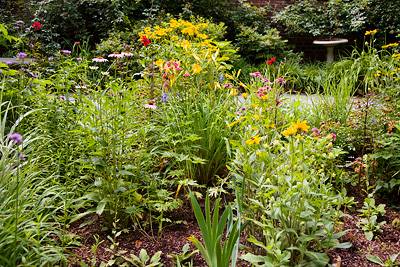 A small garden bursting with several kinds of flowers, including purple coneflowers (below), is located behind McCosh Health Center. 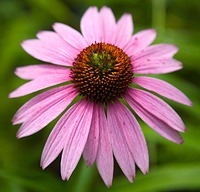 late July. In one corner there is a 40-foot Southern magnolia tree. The garden was created in the 1920s for the enjoyment of the infirmary's patients and staff. The center flower bed blooms in spring and summer with black-eyed susans, catmint, dahlias, daylilies and rudbeckia.

• Maclean House has two small gardens that offer shade and quiet. The Class of 1936 Garden, located between Maclean and Stanhope Hall, is filled with plants and flowers that thrive in shade. There are hydrangeas, hostas, native geraniums, osmanthus and painted ferns lining the pathways, as well as benches that provide a shady spot for sitting. Along the side of Maclean is the Class of 1946 Garden, which is planted with heavenly bamboo, hellebors and lavender hostas. The wisteria that climbs the nearby trellis was tied to a large elm tree while the trellis was repaired in 2006. 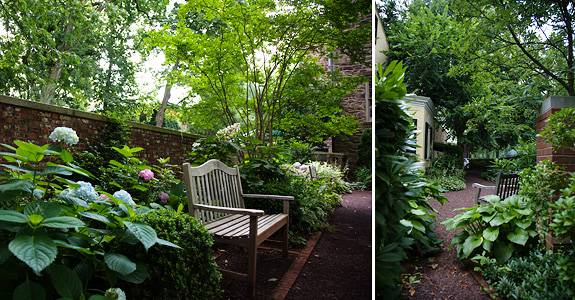 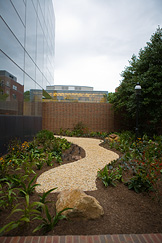 • A new garden has sprung up on a patch of land between the Seeley G. Mudd Manuscript Library and Sherrerd Hall, completed last year as the new home for the Department of Operations Research and Financial Engineering and the Center for Information Technology Policy. A winding path makes its way through bayberry, black mondo grass, Chinese ground orchids, common winterberry holly and sacred lily. 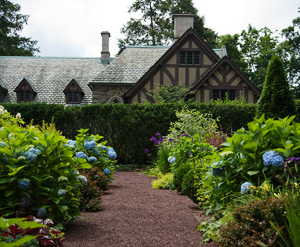 • Tucked beside Procter Hall at the Graduate College is Wyman Garden, which was designed in the early 1900s by Beatrix Jones Farrand, the University's first consulting landscape architect and a powerful force in shaping the look of the campus. The garden, which covers about one-third of an acre, bursts with wild geranium, ageratum, Japanese spirea, lamb's ear and oakleaf hydrangea. There are old stone fountains — one with a lion's head — and a sundial that was donated in 1918 by the Princeton chapter of the Garden Club of America. An arbor along one side of the garden is covered by European hornbeam.

• A tiny rose garden — a mere 20 feet by 30 feet — abuts the wide expanse of lawn behind Palmer House on the northeast corner of Route 206 and Nassau Street. The reds, whites and pinks of the roses offer a burst of bright colors in an otherwise green landscape.