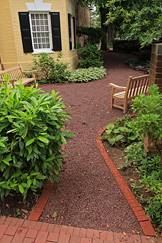 The Class of 1946 Garden on the west side of Maclean House was redesigned with new walkways, benches and plants.

Below left: The lawn space of the house gained a total of 15 feet following the trimming and removal of shrubs near the front porch.

Bottom left: The Class of 1936 Garden between Maclean House and Stanhope was completely replanted. The class contributed $100,000 at its 60th Reunion for an endowment to maintain the garden.

Just in time for the 250th anniversary of its construction, Maclean House has been the focus of some sprucing up. Crews have renovated the landscape and gardens around the house over the past few months, removing some of the overgrown plants that have been there for 50 years and creating new vistas and spaces.

The yellow house on the front campus was built in 1756 — the same year as Nassau Hall — to serve as the residence of the president. In 1968, when it became the home of the Alumni Council, it was renamed in honor of John Maclean Jr., founder of the Alumni Association and the last president to occupy the house throughout his administration.

The landscaping project comes on the heels of work on the exterior of the house completed in the last year. The exterior was sandblasted and repainted, and the shutters repaired. The work on the grounds began in March and should be finished early this summer. The plans were designed by Lynden B. Miller, a New York City public garden consultant who is a part of the new master planning team for the campus.

Crews started by removing the overgrown shrubs in front of the porch and on the east side of the house. A total of 15 feet of lawn space in front of the house was gained through this work, according to James Consolloy, manager of grounds. The shrubbery in front was replaced with yews and boxwood — a project further complicated by the need to dig under the roots of the two large Stamp Act Sycamores that date to 1766. Between the house’s front lawn and the Nassau Hall front lawn, the overgrown plants were replaced with holly to provide some measure of privacy.

“We thought it was appropriate to use plants that are native to the United States whenever possible,” said Consolloy, noting that the boxwood was grown at the University’s nursery.

Closer to Nassau Street, crews removed a privet hedge and cast iron fence that bordered the sidewalk. The fence was anchored in large stones that crews had to dig around and also remove. Plans call for the old fence, which was in disrepair, to be used to make a mold for a new fence. The hedge has been replaced by upright yews that will grow to about four feet high.

The west and south sides of the house consist of gardens named for alumni classes. These areas have been significantly improved with new plants, benches and walkways.

“The first decision we made with the gardens is that we wanted there to be interest and color year round, evolving with each season,” Consolloy said. A green and white theme was selected for the plants. 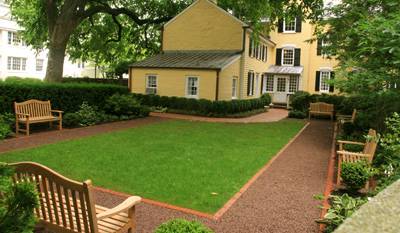 The Class of 1946 Garden represents an expansion of the walled “oasis” on the west side of the house. The garden has been planted with hostas, miniature spirea, bleeding heart, lenten rose, shrub dogwoods and perennial geraniums. The walkway is covered with small red stone and edged with brick for a “colonial” look. The wisteria that climbs the nearby trellis was actually tied to a large elm tree while the trellis was repaired, and then the plant was trimmed back.

The Class of 1936 Garden on the south side between the house and Stanhope Hall was completely replanted. The walkway was narrowed to provide more space for the plants, which include fox gloves, white rhododendrons and hydrangeas as well as small ornamental trees, such a buckeye and crape myrtle. The Class of ’36 contributed $100,000 at its 60th Reunion as an endowment to maintain the garden in perpetuity.

In addition to installing the fence in front of the house, work yet to be completed includes removing the stone steps on the east side of the building leading from the circular extension. Yews will be planted to wrap around that extension, mirroring the landscaping on the Joseph Henry House across the Nassau Hall front lawn.