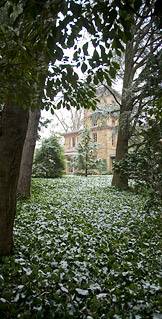 Blue Atlas cedar, Chinese wheel-stamen, white pine and hemlock trees frame the view of Prospect House from the western entrance of Prospect Garden. The gardens on campus continue to add beauty to the grounds during the winter months. 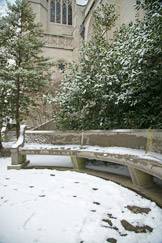 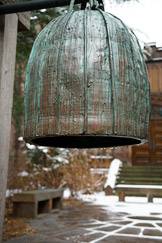 “Remembrance,” a bronze bell suspended on a wooden post at the entrance to the Sept. 11 memorial garden, was designed by Toshiko Takaezu, a renowned ceramist and a former Princeton faculty member in the Program in Visual Arts.

The winter season brings a subdued beauty to Princeton's campus. As the fall foliage fades, Princeton's evergreens take on a more prominent role in coloring the landscape and adding vitality to the grounds. According to Jim Consolloy, who retired Feb. 1 after nearly 21 years as grounds manager, some of the University's most well-traveled spaces are spectacular in winter as well as summer.

• Along the north side of the University Chapel near Firestone Library, a bench commemorates Beatrix Farrand, who served as the University's first consulting landscaping architect from 1915 to 1943. The bench's inscription reads, "Her love of beauty and order is everywhere visible in what she planted for our delight." The first stanza of Henry Wotton's poem "The Character of a Happy Life" is carved into the stone at the foot of the bench. Three types of evergreens -- American holly and Nellie Stevens holly trees, as well as spreading English yew shrubs -- serve as a backdrop. 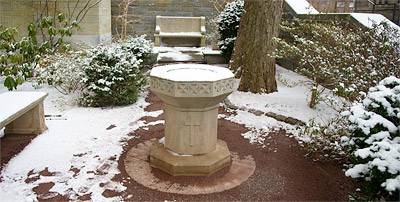 • Tucked away at the northeast corner of the chapel, the Hibben Garden features several examples of winter foliage. The garden honors John G. Hibben, who was Princeton's president from 1912 to 1932, during the chapel's construction. A sculpture marks the center of the garden's red gravel, cross-shaped paths, and a limestone bench bears the inscription, "Come ye yourselves apart into a lonely place and rest a while." The foliage includes English boxwood, Japanese little leaf holly and rhododendron trees, with sweetbox shrubs as ground cover. 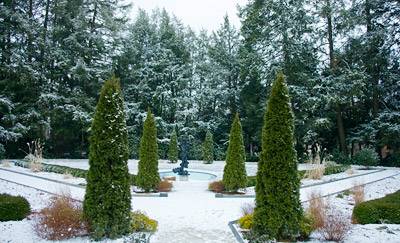 Symmetrical arborvitae trees complement the symmetrical paths of Prospect Garden, which are in the shape of the Princeton University seal. Boxwood hedges and pines, spruce and hemlock are among the other evergreens that color the winter landscape.

• Prospect Garden maintains its beauty through the winter months. More than 30 species of conifers (some evergreens and some deciduous) exist on the property. Among the trees that line the front walkway are American elms; Carolina, Japanese and Canadian hemlock; Adcock's and Norway spruces; Blue Atlas cedar; and a dawn redwood that is nearly 125 feet high. Some of the pines, spruce and hemlock trees enclosing the garden behind Prospect House are more than 150 years old. The plantings include boxwood hedges and symmetrical arborvitae trees, with approximately 8,000 flower bulbs underground waiting to bloom in the spring and summer. 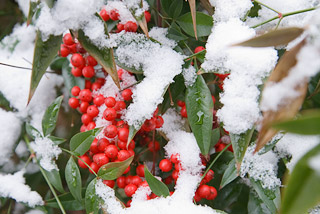 Heavenly bamboo with red berries adds a pop of color to the Sept. 11 memorial garden.

• The Sept. 11 memorial garden, on the west side of Chancellor Green and East Pyne Hall, was dedicated in 2003 to the 13 Princeton alumni who died in the terrorist attacks. On the bluestone pavers, 13 bronze stars laid in a circle bear the alumni's names and class years, and a bronze bell by artist Toshiko Takaezu marks the entrance to the garden. Three evergreen trees — a towering Kashmir (deodar) cedar, a fernleaf cypress and a Rein's dwarf incense cedar — complement the little leaf holly hedges and heavenly bamboo with red berries.