by Denise Applewhite, Office of Communications 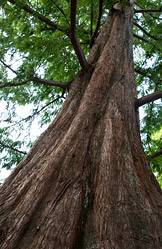 The Princeton campus has a park-like setting that has been developed carefully over time, with a wide variety of trees, both native and non-native. The majestic dawn redwood (above) along the Prospect House driveway was nurtured from seeds made available to colleges and universities by the Arnold Arboretum in Cambridge, Mass., after a special expedition brought them back from China after World War II.

The Princeton campus has a park-like setting that has been developed carefully over time, with a wide variety of trees, both native and non-native. The majestic dawn redwood (above) along the Prospect House driveway was nurtured from seeds made available to colleges and universities by the Arnold Arboretum in Cambridge, Mass., after a special expedition brought them back from China after World War II.

The Princeton University campus has been described as a vast arboretum — a carefully planned garden that, with its mix of exotic imports and native species, would never be duplicated in nature.

During the first few decades of Princeton's existence from the mid-1700s, those who passed along the King's Highway (later Nassau Street) looked across a bare lot at Nassau Hall, one of the largest stone buildings in the colonies, and the President's House (now called Maclean House). The campus has evolved from a barren landscape to the lush, park-like setting it has today, though more than 100 trees were felled by Hurricane Sandy in October.

This collection of photos illustrates a sampling of the tree species that may be found on the University grounds; some of the descriptions have been adapted from the book "Trees of Princeton University: An Arboreal Tour of the Campus," published by the University. 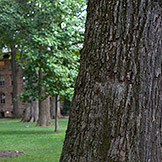 American elm (Ulmus americana)
An American elm is shown on the Nassau Hall lawn, and they also can be found lining Washington Road approaching campus. The Washington Road elms were planted around 1925 as part of the Roadway Beautiful Movement, and this span is listed on the New Jersey and National Register of Historic Places. More than half of the original trees have survived Dutch elm disease, which has destroyed millions of trees in the United States since 1930. 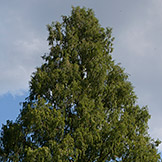 Dawn redwood (Metasequoia glyptostroboides)
Along the Prospect House driveway is a dawn redwood that towers 70 feet over the rhododendrons, though it was only six feet high when planted in 1948. The Prospect dawn redwood was nurtured from seeds made available to colleges and universities by the Arnold Arboretum in Cambridge, Mass., after a special expedition brought them back from China after World War II. The species has needlelike leaves that turn a rusty red before falling from the tree. In the fall, the needles and bark share a similar hue. 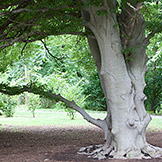 European beech (Fagus sylvatica)
The University took great lengths to preserve this tree during construction of the Frick Chemistry Laboratory. The European beech is native to northern Europe and is noted for the gray bark and broad crown. It fares poorly when the roots are compacted or compromised so during the construction phase of the laboratory a tool called an air spade was used to blow the soil off the roots, to be replaced with a nutrient rich soil to promote root growth. 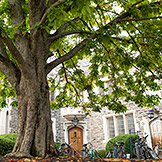 Horse chestnut (Aesculus hippocastanum)
Horse chestnuts, such as this one in front of 1915 Hall, are stately trees that provide shade. This species, which produces large, white flowers in May, is native to Europe though it is also found in many parts of the United States. 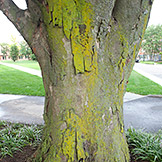 Japanese zelkova (Zelkova serrata)
This is a medium-sized, vase-shaped deciduous tree that usually grows to 100 feet tall. On campus, these can be found lining lower Elm Drive opposite the red oaks. Japanese zelkovas have grayish bark, and the moss as seen on the northwest side of this tree thrives because of the damp atmosphere and does not harm the tree. The leaves have serrated edges, to which the tree owes its species name. They are green to dark green in spring and throughout the summer, though they change color in the autumn to a various assortment of yellows, oranges and reds. 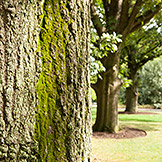 Red oak (Quercus borealis)
Red oaks are the state tree of New Jersey. On campus, they grow along lower Elm Drive, across from the Japanese zelkovas mentioned above. The leaves turn red in the fall, giving the tree its name. 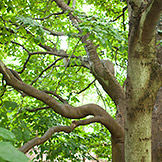 Saucer magnolia (Magnolia soulangiana)
The tree in front of 200 Elm Drive is a saucer magnolia, a species that produces big white or pink flowers in late April or early May. This is a very large plant group and Princeton has many varieties of magnolias on campus, such as Scudder Plaza by Robertson Hall and along the walkway west of Pyne Hall. 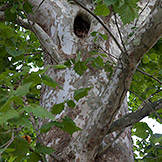 "Stamp Act Sycamores" or American sycamore (Platanus occidentalis)
On the front lawn of Maclean House is a pair of sycamores ordered by the University trustees in 1765. According to legend, they were planted in commemoration of the Stamp Act's repeal in 1766. These are the oldest trees on campus and may remain a while longer; the sycamore may live up to 600 years. Native to lowland areas in the East, the American sycamore is the most massive of Princeton's native trees. The Stamp Act sycamores may have been the only trees planted on campus until the 19th century. 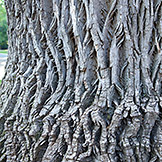 White ash (Fraxinus americana)
The huge white ashes on the front lawn may date to the 1825 replanting of that space, after Lombardy poplars planted in 1800 failed to thrive. The white ashes that line Cannon Green were probably planted in 1836, when prominent Princeton physicist Joseph Henry laid out the quadrangle. With their six-foot diameters and diamond-shaped bark, these are the most imposing trees on campus.