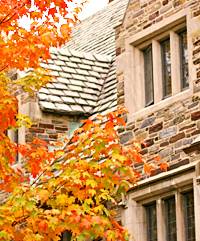 These sugar maples near Holder Hall provide dense shade in the summer and lustrous golden-orange foliage in the autumn.

The Princeton University campus might be viewed as a vast arboretum -- a carefully planned garden that, with its mix of exotic imports and native species of trees, would never be duplicated in nature.

Especially at this time of the year, with the leaves turning vibrant colors, the trees on Princeton's campus make a strong impression.

According to a book, "Trees of Princeton University: An Arboreal Tour of the Campus": 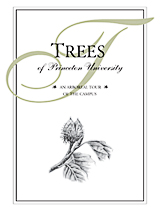 • The oldest trees on campus are a pair of sycamores on the front lawn of Maclean House. Ordered by the trustees in 1765, these trees were planted -- according to legend -- to commemorate the repeal of the Stamp Act in 1766.

• The once-doomed American elm still survives in large numbers on the University campus. The oldest specimen is a 200-year-old tree that spreads its branches over the front entrance to the campus.

• An American basswood provides dense shade to the inner archway between Blair and Joline halls. The age of this seven-story giant is unknown, although it already was a stately tree when the courtyard enclosed it at the beginning of the 19th century.

• Near the Prospect Garden driveway is a dawn redwood that towers over the rhododendrons. When planted in 1948, it was only six feet high, and its trunk was the size of a man's arm. More than 50 years later, it measures 115 feet in height and 13 feet in circumference.

• A few giant white ash trees still remain on Cannon Green and east of FitzRandolph Gate. These are among the tallest deciduous trees on campus and may date from the 1825 replanting of the front lawn of Nassau Hall.