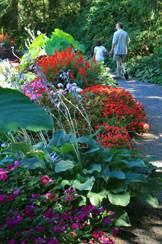 Many campus visitors stop to admire the lush landscaping at Prospect Garden.

At left: The garden, established in the mid-1800s, includes a colorful array of 8,000 flowers ranging from geraniums to iris.

All summer long, visitors to Princeton's Prospect House are treated to a view of its lush, colorful garden.

• Planting in the garden began shortly after the house was completed in 1849. Around that time the cedar of Lebanon, the hawthorn and the yew were installed near the tower on the west side. The cedar, a magnificent specimen, was one of the highlights of the garden until it was toppled during a snow storm in April 2003.

• The current layout was designed by Ellen Wilson, wife of former Princeton president Woodrow Wilson, who lived at Prospect House from 1902 until 1910. When viewed from above, the garden's pathways define the outline of the University seal.

• Eight thousand flowers are planted in the garden every year during a two-week period in May, after the tulip bulbs that bloomed in the spring are removed. Four landscapers from the grounds department plant the garden, which is planned by grounds supervisor John Wisniewski and supported by a gift from an anonymous donor.

• The 7-foot-wide flower beds contain geraniums, begonias, ageratum, impatiens, four kinds of marigolds and a dozen other types of flowers. The garden's permanent collection of perennials has day lilies, hibiscus, iris and other plants.