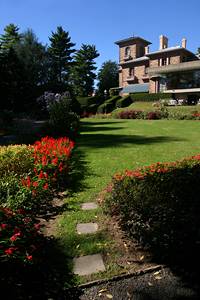 The flower garden at the rear of Prospect House was originally laid by Woodrow Wilson's wife, Ellen. In her design, the garden's pathways define the outline of the University shield when viewed from above.

Prospect House, known for its picturesque gardens, is one of the University's most historic buildings and a major destination for Princeton campus community members and visitors alike.

The magnificent Italianate Victorian mansion was built around 1850 by the American architect, John Notman, and is one of the few University buildings not originally part of the campus. After its acquisition by the University in 1878, Prospect House served as the residence for six Princeton presidents and their families for 90 years before it was converted for its current use as a social and dining center for faculty and staff members.

Prospect House owes its name to the stone farmhouse first constructed on the site in the mid-18th century by Col. George Morgan, who dubbed his estate "Prospect" in honor of the superb eastern view from the farmhouse. When Prospect was acquired in 1849 by John Potter, a wealthy merchant from Charleston, S.C., he replaced the colonial structure with the present mansion. In 1878, Robert L. and Alexander Stuart of New York bought the house and accompanying 35-acre estate and deeded it to Princeton University, then known as the College of New Jersey.

Prospect House served as home of Princeton's presidents beginning in 1879 with James McCosh. As the campus enlarged, students began to take shortcuts across the lawns and gardens of Prospect House, ultimately leading then-Princeton President Woodrow Wilson to erect an iron fence enclosing five acres of the grounds in 1904.

The grounds surrounding the house present an array of trees, bushes, plants and flowers from the commonplace to the exotic. Planting in the garden began shortly after the house was completed in 1849.

The flower garden at the rear of Prospect House was laid out in approximately its present form by Wilson's wife, Ellen. In her design, the garden's pathways define the outline of the University shield when viewed from above. She also supervised the planting of the evergreens that serve as a backdrop for the flower garden. The flowers are changed at regular intervals throughout the growing season, an effort supported by a gift from an anonymous donor.

In 1968, during the tenure of Robert Goheen, the official residence of the University president was moved to Walter Lowrie House and the mansion was converted for use as a dining facility.

Student-athletes use 'weapons of mass construction' to help nonprofit