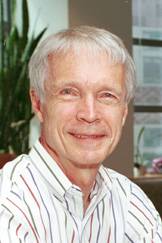 Princeton Professor John Hopfield has been selected to receive the 2005 Albert Einstein World Award of Science by the World Cultural Council.

The award usually is given in recognition of an outstanding contribution to a discipline within the pure or applied sciences that has benefited the human race. Hopfield is being honored for his contributions to three major disciplines -- physics, chemistry and biology -- and for his ability to cross boundaries "to discover new questions and propose answers that uncover the conceptual structure behind the experimental facts," according to the council.

"[Professor Hopfield] today is considered the leading theoretician of biology, both in terms of accomplishment and influence," a news release from the council stated. "His ability to think broadly as well as deeply about science is a characteristic shared by very few scientists in modern times."

Hopfield currently is the Howard A. Prior Professor in the Life Sciences at Princeton, where he joined the faculty as a professor of physics in 1964. In 1969, only 11 years after earning a Ph.D. in physics from Cornell University, he received the American Physical Society's Buckley Prize for his research on the emission and absorption of light by semiconductors.

Over the next several years, Hopfield switched his research focus from physics to biology and earned an international reputation for his pioneering applications of physics-related computational techniques to the emerging field of neurobiology. He has worked to develop a theoretical understanding of how the neural circuits of the brain perform complex calculations, investigating the way in which nerve cells work together to process sensory perceptions such as the recognition of odors or sounds. The Hopfield model of neural processing, which provides insight into the differences between computation in computers and the brain, has become widely referenced in the field.

The recipient of a MacArthur Foundation Award in 1983, Hopfield also received the American Physical Society's Prize in Biophysics in 1985 as well as the Dirac Medal from the Abdus Salam International Centre for Theoretical Physics in 2001. He is a member of the American Academy of Arts and Sciences and the National Academy of Sciences. Between 2000 and 2002, he served on an NAS panel on undergraduate biology education for future scientists.

A professor of chemistry and biology at the California Institute of Technology from 1980 to 1997, Hopfield returned to Princeton as a professor of molecular biology in 1997 and was named to the endowed professorship in 2002. He also serves on the faculty of Princeton's Lewis-Sigler Institute for Integrative Genomics.

The Albert Einstein World Award of Science will be presented Nov. 12 during a ceremony at the Universidad Autónoma Agraria Antonio Narro in Saltillo, Coahuila, México. The World Cultural Council is an international organization based in México that annually acknowledges individuals or institutions for outstanding achievements in science, education and the arts. During the same ceremony, Mexican architect Enrique Norten will receive the Leonardo da Vinci World Award of Arts.