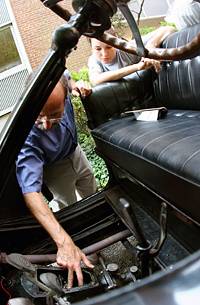 A new series of summer workshops in the Department of Mechanical and Aerospace Engineering allows students to explore parts of their field that they do not usually encounter in the classroom, including a chance to repair and drive a Model T Ford. Above, Professor Michael Littman inspects the work sophomore Sarah Sherman completed on the 1921 vintage vehicle.

As a student in mechanical and aerospace engineering at Princeton, Phillip Kang has been captivated by the modern technologies of hypersonic flight and robotics. But when offered the chance to spend part of his summer working on an 80-year-old car with a top speed of 50 miles per hour, he jumped at it.

"Even if I have to clean parts and do the dirty work, it's still fun. Oh, we have to lift the engine? No problem! It's dirty inside? We'll clean it!" said Kang, describing the joys of repairing and maintaining a Model T Ford. Such unbridled enthusiasm was common among the 27 mechanical and aerospace engineering students who participated in a new series of summer workshops designed to expose students to areas of engineering they may not encounter during the regular school year.

The workshops, held once or twice a week, covered a half-dozen subjects, from hands-on projects in a machine shop to practical training with engineering software. A highlight was the chance to work on and drive a 1921 Model T Ford, which the department purchased with special funds from the Office of the Dean of the College. For the program participants, most of whom already were on campus for the summer working in faculty labs, the workshops were both a fun diversion and a learning opportunity.

"It's a really nice break from work and a chance to meet other people in the department across years and positions," said senior Crawford Hampson, who served as program coordinator and also participated in the workshops. "I now know more of the rising juniors and sophomores than I ever expected to, since during the year I don't have classes with them. It's also been a great chance to get to know the faculty outside of the classroom. The program's been popular."

The program also fosters a stronger connection between the department and underclassmen, who typically are not exposed to hands-on engineering projects until their junior and senior years, said Michael Littman, the professor of mechanical and aerospace engineering who conceived and organized the workshops.

Working on the Model T, said Littman, helped show students the creative genius behind simple engineering solutions that do not use high technology but have a big impact. "It's an amazing tool to use for teaching because it's wonderfully simple," Littman said "It's a real minimalist vehicle. It's very cleverly designed, and there are no extra parts. Students see an economy of engineering that's hard to discern in complex, modern vehicles."

Technical staff member Glenn Northey, who worked on the car and helped lead the workshops, agreed: "Before this, my students didn't know how an engine works. Now, they know not only in theory, but through hands-on examination. You've got to know the basics as illustrated by the 'T,' for example, before you can understand things like variable valve timing."

Beyond the scraping, grinding and washing of parts, Littman and the students worked together to analyze the engineering that went into the "T" and discussed how Henry Ford's engineers solved problems in effective and imaginative ways. Students even got to drive the car during a recent workshop at the Forrestal Campus, an exciting challenge since its pedals work differently than those in modern automobiles.

"It's nice to get our hands dirty, and it helps us appreciate that engineering is not always an exact science," said Kang, who is a senior. "Often the question is: Is it good enough? There are a number of things on the Model T that might not have been the best solution, but they worked."

Engineering lessons aside, the workshops also helped make the department an inviting place to spend the summer. "It's a great experience to just talk with professors," Kang said. "There's little distinction between student and teacher in these workshops. It's more like a group of people sharing a common interest."