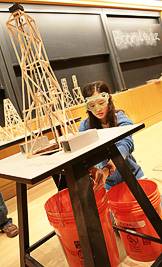 More than 600 middle school and high school students gathered on Princeton's campus Tuesday, Jan. 8, to compete in a regional tournament of the New Jersey Science Olympiad. Events included the Tower Building competition, which challenged students to erect a lightweight tower that could bear a comparatively heavy load without collapsing. This student from the William Satz School in Holmdel demonstrated her device.

Above and below left: This car in the Electric Vehicle competition used old compact discs for wheels.


Bottom left: Led by the University's Office of Research and Project Administration, Princeton faculty, staff and students contributed their time and expertise to plan and run the event along with industry volunteers from the Research and Development Council of New Jersey. Anna Michel, left, a postdoctoral research associate in the Princeton Institute for the Science and Technology of Materials, and Yu Yao, right, a graduate student in electrical engineering, assisted in the Electric Vehicle competition.

Andy Le and Richard Chu steadied their wooden craft and carefully loaded its prow with precious cargo -- a raw egg. After some careful adjustments (in which duct tape figured prominently), Le and Chu launched the vehicle -- and held their breath. The craft sailed forward regally, but stopped about 40 centimeters shy of the target (the egg safely intact).

Undaunted by this somewhat disappointing result, the team coolly brought the vehicle back to the starting line, recalibrated a bit and then relaunched. This time it shot off, careening a bit to the left before crashing into the wooden wall that constituted the finish line -- the egg, amazingly, intact.

Teams from 16 middle schools and 17 high schools competed in the regional Science Olympiad tournament hosted by Princeton University. It featured more than 30 events, among them the Scrambler, which challenged students to build a small vehicle that uses the energy generated "from a falling mass (in most cases, lead weights) to transport a Grade A uncooked chicken egg along a straight track." 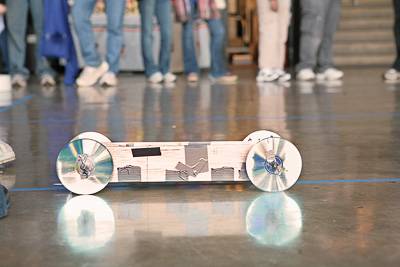 Glenn Northey, manager of the machine shop in the Department of Mechanical and Aerospace Engineering, oversaw the Scrambler event and was among dozens of University faculty, staff and students who volunteered throughout the day. Northey said that he was impressed by this year's vehicles. "Some of them are quite ingenious," he said.

At last year's Olympiad, a couple of innovators installed brakes on their Scrambler vehicles. This year most entries had brakes. "Word gets around," observed Northey. Most of this year's vehicles also sported wheels made of old compact discs. "Less friction," explained David Radcliff, senior technical support staff member in the Department of Mechanical and Aerospace Engineering.

Many students put considerable thought and elbow grease into their inventions.

Ante Qu and Sudershan Srinivasan, ninth-graders at West Windsor-Plainsboro High School South, said they spent about five hours designing their entry in the Electric Vehicle competition, experimenting with a braking system of Lego pieces and hinges that they ultimately had to abandon for another approach. Their efforts paid off, with their vehicle coming to a smooth, slow stop at the finish line.

Other competitors were more nonchalant. Ilija Melentijevic and Rohit Muralidhar from Bridgewater-Raritan High School spent about only an hour putting their electric vehicle together last Saturday with off-the-shelf Lego parts. Still, their creation performed beautifully, gliding straight down a line of blue tape and stopping right on the money. 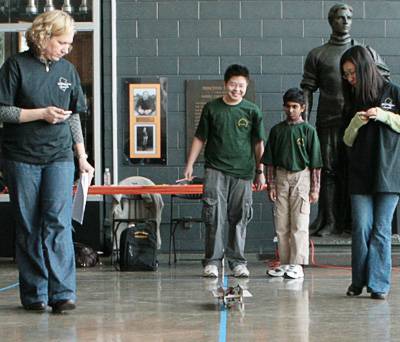 The Electric Vehicle event was monitored by volunteers Yu Yao, a graduate student in electrical engineering; John Grieb, lead programmer analyst in the Office of the Registrar; Anna Michel, a postdoctoral research associate in the Princeton Institute for the Science and Technology of Materials (PRISM); and Doug Adamson, a research scholar in PRISM.

"They are all really cute," said Michel. "One vehicle we didn't think was going to make it, but then it performed perfectly on the second try."

Entries in most events varied widely, constrained only by the rules and the students' imaginations. Those for the Tower Building competition, which challenged students to erect a lightweight tower that could bear a comparatively heavy load without collapsing, were no exception. They ranged greatly not only in design but in weight, from 4 grams to 280 grams.

The Boomilever competition, a similar event in the same room, challenged students to build a lightweight, load-bearing cantilever-like structure. "After a tedious amount of testing we found out that the wood worked best under tension rather than compression," explained Jonathan Gutman, a junior at Montgomery High School who, with senior David Piech, entered an elegant streamlined triangle-shaped Boomilever into the competition.

By noon the most impressive Boomilever entry thus far was able to hold a load 271 times its weight. (Ants, known for their impressive relative strength, are able to carry only 10 times their weight, noted one of the industry volunteers supervising the event.)

Led by the University's Office of Research and Project Administration, more than 300 volunteers helped with the event, many of them Princeton faculty, staff and students along with industry volunteers through a partnership with the Research and Development Council of New Jersey.

"It is really wonderful how people from all parts of the University come together to welcome these students to the Princeton campus with such enthusiasm and spirit," said Dale Grieb, special projects manager in the School of Engineering and Applied Science, who coordinated the tournament for the University.

The top finishing teams at the Princeton tournament will advance to the March state finals at Middlesex County College in Edison; top finishers there will advance to the finals in May at George Washington University in Washington, D.C. The Science Olympiad was created 23 years ago to provide an alternative to traditional science fairs. It includes members from 14,000 schools in all 50 states, Mexico and Canada.