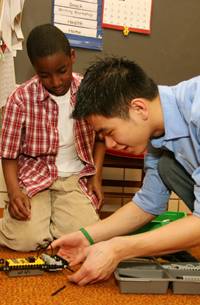 Junior Jian Li helped Sam Nelson assemble his car around a microprocessor that allows the children to program the vehicle to back up and turn when it meets an obstacle. 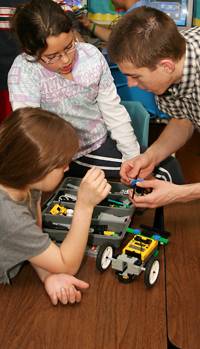 Sophomore John Donnal worked with Sophia Eisenberg (center) and her classmate Sofia to add a bumper that trips a switch when the car runs into something.

A group of Princeton University students is using Lego toys as teaching tools to take children beyond textbook math and science and stoke their imaginations with hands-on engineering.

The student group, Princeton Engineering Education for Kids (PEEK), is collaborating with teachers at Riverside Elementary School in Princeton to help children build their own computer-controlled cars and, at the same time, learn principles of engineering. For the past two years, the University students have been spending an hour and a half a week for five weeks each semester in most of the classrooms at the school.

"Legos are a good tool to get people excited about learning in general," said senior Rosalind Echols, co-president of PEEK. "It is a toy, but it's something that is really exciting to children, so we associate that with learning and it brings out that learning can be fun too."

"It's not only fun, it's problem-solving; it's working together; it's learning to compromise," said fourth-grade teacher Pam Devine, as her students worked in pairs on the day's assignment of making their cars back up and turn around when they bumped an obstacle. "It touches on all the content areas of our curriculum -- and the kids enjoy it."

The PEEK program grew out of the work of former visiting faculty member Chris Rogers, a professor of mechanical engineering at Tufts University, who taught at Princeton in 2002-03. Rogers worked with the Lego company to add a small microprocessor, motors, touch sensors and other devices to the toys. Using a computer, the children invent programs that determine the behavior of their creations, then transfer the programs to the onboard microprocessor. Rogers taught a freshman seminar using Legos and helped Princeton students create a curriculum for local schools.

PEEK now has 15 to 30 students who go into classrooms each semester and a total membership of nearly 100 undergraduates, including a number of non-engineers and non-scientists. In addition to the regular classroom sessions in kindergarten through fourth grade, PEEK organizes "engineering nights" when the children can enter their Lego creations into competitions. The group, which is advised by Clarence Rowley, assistant professor of mechanical and aerospace engineering, is looking for funding to expand into other Princeton elementary schools.

In a recent session of Devine's class at Riverside, sophomore John Donnal and junior Jian Li helped the children figure out how to build bumpers that would press against a small sensor when the vehicle hit something. Fourth-graders Hanna and Emily were among the first to be ready to program instructions into their car. "Cool!" said Emily when the program successfully transferred from a desktop computer. But, far from being finished, the girls ran into difficulties when they tested the car. The bumper fell off, and the wheels lost traction. They headed back to the Lego bricks and the computer, slowly improving the performance of their car.

In another team, Julian and Jaz were delighted when their car got stuck in an endless loop of hitting a wall, backing up and plowing forward again, but not turning. "I think it's interesting to find out how to make things and make them work," said Julian.

"It was funny watching our car burst into pieces," said Jaz. "It's good to add on a lot of pieces, but not unneeded pieces. Get just enough pieces and you're going to be O.K."

The classroom visits are a chance for the Princeton students to think in a new way too. "It's a little intimidating when you first go in because you are facing 20 kids who love Legos but have no idea what you're talking about," said Echols. "You can't say, 'Let's talk about torque!'"

"A lot of times you'll be surprised," said junior Mark Spano, the group's incoming president. "They really do understand something, just not in the words that you're explaining it to them in. They have a pretty good physical intuition about this stuff."

Devine said that another benefit of the program is it engages students of all abilities. "Sometimes a child who may be having trouble in math or computers really thrives in Lego engineering," she said. "It's a place where everyone can excel."

"My favorite thing," said Echols, "is when I ask a question that I am not really expecting anyone to answer, and some person in the class who I've never heard speak before will shoot their hand up and say, 'Ooh, ooh, I know!' and give you almost a perfectly worded answer. It's really exciting."

PEEK's ultimate goal is to increase the level of interest among students, especially girls, in science and engineering, but the program also shows students that playing and learning go together long past elementary school. "You can have fun even when you get past the age when you should be playing with Legos, like college," said Echols.