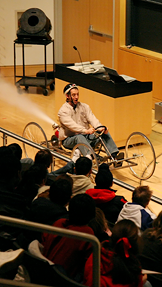 Alain Hebert, a parent chaperoning the 2006 Science and Engineering Exposition at Princeton University, rockets across the stage in a fire extinguisher-powered vehicle, courtesy of the physics department.

Kitty Wagner mixed three colorless fluids in a glass atop the counter and walked away, but the students filling the auditorium remained enthralled by the concoction for the next 15 minutes as it repeatedly changed from clear to golden to opaque blue and then back again, seemingly like clockwork.

As the oohs and aahs subsided, Wagner worked through a demonstration of many ways to produce color with chemistry, and then led students to a lab where they were able to try to reproduce some of the effects themselves. After the show in the auditorium, firing up their enthusiasm for lab work wasn’t a problem.

More than 900 students from 10 junior high schools converged on Princeton’s campus on March 21 for the 2006 Science and Engineering Exposition (SEE), which brought the group into Dillon Gym, Frick Lab, Icahn Lab and McDonnell Hall. Each location offered the students a staged demonstration of the fun and dramatic sides of modern science, followed by hands-on experiences with the tools that made the demonstrations work. The annual event aims to both entertain and expose students to subjects that might otherwise seem less enticing.

“Young students generally find a subject more compelling if they can see and touch what’s happening, rather than hearing about it in textbooks alone,” said Dan Steinberg, one of the event’s coordinators. “Because it can be difficult for junior high school classrooms to provide these kinds of opportunities, SEE is our way of trying to keep students involved at a critical age when many of them have, historically, turned away from their childhood interests in science. We’re trying to re-light that spark.”

Efforts to do so by the Princetonians involved in SEE included Wagner demonstrating what color a kosher dill pickle is when it’s electrified -- it’s yellow, by the way, from all the sodium in its salt -- and how to make a flame burn in several colors by adding other salts to the fuel. Scientists in Dillon Gym elucidated the behavior of magma with gelatin volcanoes, and graduate students in Icahn Lab displayed the beating hearts of translucent zebrafish in real time on computer monitors.

The expo was organized by Ann Sliski, outreach coordinator in the Department of Molecular Biology, who worked with Wagner, Steinberg and professor of physics Suzanne Staggs to involve some 70 faculty members, staff scientists and students from more than a dozen academic departments and programs and the Geophysical Fluid Dynamics Lab. The event also included displays and activities from local companies and organizations, including Wyeth, FMC Corp., Sensors Unlimited/Goodrich and the Stonybrook-Millstone Watershed Association.

Steinberg, director of education and outreach at the Princeton Institute for the Science and Technology of Materials, said that the value of programs like SEE would likely be felt several years down the line.

“We’re now holding the expo for the third year, but what we’re hoping is that outreach programs like this will bear their real fruit when these kids go on to major in science and engineering in college and graduate school,” he said. “The U.S. has traditionally been a leader in these fields, but we are falling off in the number of home-grown experts we develop. We can’t wait until these kids are in college to attract them, because by then they will need to have had the educational background needed for such programs. That requires them to have sufficient interest to learn the fundamentals now.”

Good experiences with science early in life were critical to the development of young engineers like Craig Arnold, who joined Princeton’s faculty in 2003.

“My interest in science began when I was very young, and my familiarity with the ideas of science is part of what kept me going,” said Arnold, who is an assistant professor of mechanical and aerospace engineering. “Even if a young person cannot yet do college level work, it’s important just to get familiar with the language scientists use. If you’re afraid of the big words in science books, you can get the impression that math and physics are hard and disinteresting, even when the concepts themselves may not be. It’s a shame that for such simple reasons the sciences often lose talented people who merely think they’ve lost interest.”

Lack of interest did not appear to be a problem in any of the demonstration rooms, as the constant laughter among the physics audience attested.

“I give lots of public talks, but this age group is the best one for getting that ‘audience charge’ that performers speak of,” said Staggs, who had just brought down the house by sending one of the group’s adult chaperones zooming across the stage and out the door in a fire extinguisher-powered car. “You catch the excitement from them and it’s terrific.”

The performance seems to have snagged the attention of Camille, a student at Montgomery Township Middle School, who ranked it among her favorites.

“I had no idea you could do so much with electromagnetism,” she smiled as she wandered about Dillon Gym, exploring the engineers’ technical applications of what the physicists had just finished showing her. “I’m learning a lot today.”

Science of light — and pickles — illuminate the holidays