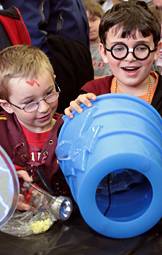 Harry Potter look-alikes have fun at "Princyclopedia 2007" on Saturday, March 31, in Dillon Gymnasium. Cotsen Children's Library sponsored the interactive book convention to celebrate the popular series by J.K. Rowling about a boy with special powers who inhabits a world known only to wizards. The annual event will have a different book as its theme each year.

Above left: Freshmen Gina Davis (left) and Diana Chien, who helped out at the event, show off their magical creatures. 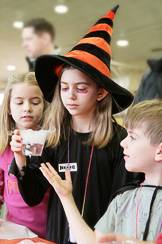 Children examine a cup of wizard's brew at one of the many demonstrations by University and community organizations.

Standing in a line that wrapped around Dillon Gymnasium, parents prepared their eager children to enter the building. Moms and dads straightened tall, black pointy hats, tightened sashes on colorful robes that dragged across the ground, and placed thick-rimmed, round glasses on the bridges of noses.

When the doors opened at 10 a.m., families hurried inside to find the gymnasium transformed into the magical world of "Harry Potter," complete with live animals, wizards, ghosts and goblins. It was all part of "Princyclopedia 2007," the interactive book convention sponsored by Cotsen Children's Library.

The event brought the University and community together on Saturday, March 31, to celebrate the popular series by J.K. Rowling about a boy with special powers who inhabits a world known only to wizards. Dana Sheridan, education and outreach coordinator for Cotsen Children's Library, said she was amazed by the large turnout at the inaugural event and was already thinking about which book to select as next year's theme.

"Princyclopedia brought a lot of people to campus who had never been here before," Sheridan said. "A lot of parents have come up to me to say how much they appreciated Cotsen putting together something like this."

Hundreds of families walked around the gymnasium visiting tables organized by University and local organizations, such as the Department of Chemistry, the Princeton Institute for the Science and Technology of Materials (PRISM), the Princeton University Art Museum, the YMCA, Cloak & Dagger Bookstore and Terhune Orchards. 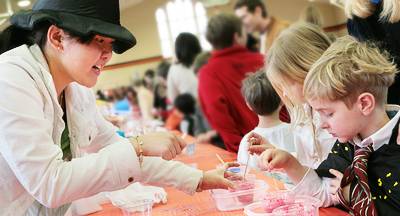 "Do you think you could make a snowman out of it?" Wagner asked a group of children who were examining a powdery, white material she had poured onto a plate.

"I think it could be good for snow angels," responded one young girl.

At a nearby table Daniel Steinberg, educational outreach director for PRISM, wowed children and parents alike with a demonstration using marshmallow Peeps. Steinberg deflated and inflated the Peeps by placing the candy chicks in a sealed container and pumping air in and out of the glass chamber.

"Engorgio is the spell in 'Harry Potter' to make things big," Steinberg said as he waved a wand over the container and the Peeps plumped up.

"It's really cool to watch them take stuff and change it so quickly. They don't do things like this in my science class," said 9-year-old Kyle.

Steinberg's colleague Shannon Swilley said children at Princyclopedia were curious to learn about the science behind the magic of "Harry Potter."

"I think it excites the kids because they realize they can find the trick and do it themselves. It's not just a wave of a wand -- there are some real scientific principles for why these things happen," said Swilley, educational outreach assistant for PRISM.

Children also were drawn to the other interactive displays at Princyclopedia where they could make their own costumes, learn herbology, have their palms read and see live owls, snakes and bugs thanks to the Raptor Trust and Nature by the Yard.

In addition, the small guests enjoyed meeting grown-up fans of "Harry Potter," such as the University students from Tiger Inn, who dressed as ghosts and walked around spooking the crowd. Freshmen Malia Douglas and Alejandro Perez wore green face paint and fake teeth to transform themselves into Gringotts goblins.

"They're just so eager to enter into the make believe of it all," she said. "It's so great to see kids enjoy themselves with that glint in their eye."