With a determined look on her face, 8-year-old Ellie Davis pulled herself forward on a rowing machine as a crowd gathered around, cheering on the girl in tiger ears and an orange tutu.

Davis, whose sister Mary Kate is a Princeton freshman, was one of many visitors to campus Sept. 27 for the annual Community and Staff Day, organized by the Office of Community and Regional Affairs. This year's activities included a youth sports clinic hosted by University student-athletes; the Princeton football team's home opener against Davidson College, to which area residents received free tickets; a Family Fun Fest with children's entertainment and crafts and an information fair for University and community organizations; and a post-game fireworks show. More than 11,000 people attended the game, a 56-17 victory for the Tigers. 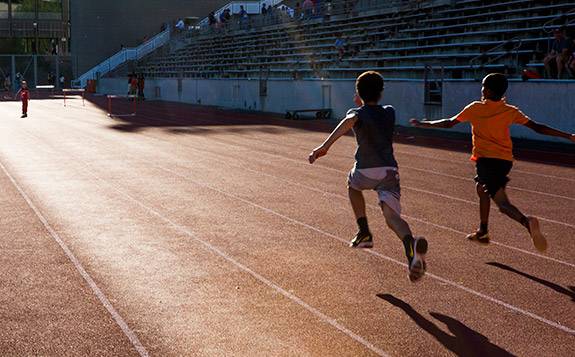 At Community and Staff Day, activities included a Princeton football game, fireworks, a youth sports clinic and an information fair with University and community organizations. Above, two boys race down Weaver Track during the sports clinic. (Photos by Denise Applewhite, Office of Communications)

"We had perfect weather, a large crowd and a big win for the Tigers. We were delighted by the attendance and the enthusiasm of the crowd," said Erin Metro, associate director for community relations. "We greatly appreciate the Princeton student-athletes who helped to organize and run the always-popular youth sports clinic and the numerous community organizations and campus partners who came to participate in the Family Fun Fest."

Around the stadium concourse, inflatables for children and face-painting stations catered to the crowd. Groups including the Arts Council of Princeton, the municipal Princeton Recreation Department and the University's Office of Sustainability staffed information booths. 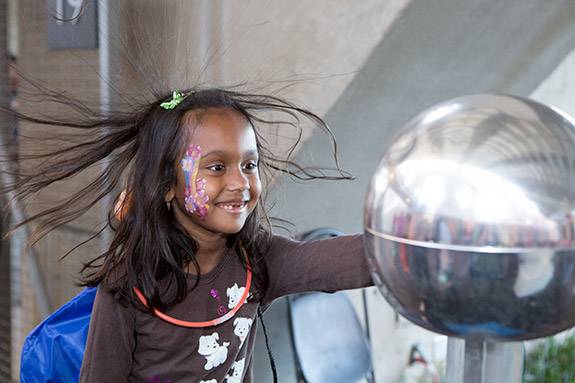 Anja Basdeo, age 6, places a hand on a static electricity demonstration ball at the Princeton Plasma Physics Laboratory's table, sending her hair into the air.

Anja Basdeo's long hair began waving in the air as the 6-year-old from Plainsboro, New Jersey, placed a hand on a static electricity demonstration ball at the Princeton Plasma Physics Laboratory's table. At a booth for the University's Cotsen Children's Library, library staff dressed as wizards did crafts with young children.

Sarah Debraski, whose husband Paul works in the University library system, watched as her daughter Tabitha, 6, played with the wizards. "We've never been to a football game here, so I'm super excited," Debraski said, adding that her daughter had already tried out fencing, softball and track. "The athletes were so nice. It's really fun." 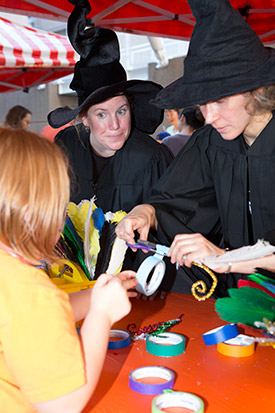 Dana Sheridan, right, education and outreach coordinator for Cotsen Children's Library, and her assistant, Katie Zondlo, introduce children to the library through a crafts project.

The sports clinic, held at Weaver Track next to Princeton Stadium, featured a number of sports, including baseball, basketball, crew, fencing, lacrosse, softball and track and field, among others.

Nicki Byl, a senior and captain on the open women's crew team, said the crew station had seen lots of traffic. "It's my first time" at Community and Staff Day, she said, adding that she was glad to participate before graduating.

Michael Navarro, of Lincroft, New Jersey, watched as his son Dean and daughter Talia took turns at a lacrosse net, with coaching from members of the women's lacrosse team.

"We're here for the day and hope to see a good football game," he said.

The game began with Princeton running back Dré Nelson returning the opening kickoff 89 yards for a touchdown, on the way to a dominating victory.

After the game, fireworks lit up the night sky.

Sal Caputo, a security operations manager in the University's Department of Public Safety, joined the staff three months ago, and he was eager to bring his children and niece to campus.

"They were excited about meeting the athletes," he said. With warm, clear weather and an abundance of activities, he said, "It's an all-round great day."

Community and Staff Day brings students and families together for fun, football and fireworks