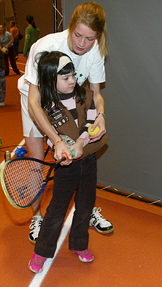 At left: Freshman lacrosse player Marine Graham was among many female student-athletes who dedicated their time to help local children learn more about sports.

Many of Princeton's female student-athletes took time on Saturday, Feb. 11, to play the role of coaches for local youngsters on National Girls and Women in Sports Day.

Joining in a national effort to teach children about the value of sports, the Department of Athletics sponsored an interactive fair in Jadwin Gymnasium prior to the Princeton women's basketball game against Ivy League rival Dartmouth. 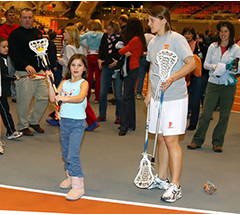 The University's event was one of many held nationally to celebrate the importance of athletics for girls and women of all ages. National Girls and Women in Sports Day was chartered by Congress in 1986 in memory of former U.S. Olympic volleyball team captain Flo Hyman, honoring her athletic achievements and her work to assure equality for women's sports.

Following the fair, the University recognized the 35-year history of women's sports at Princeton with a halftime ceremony during the women's basketball game.