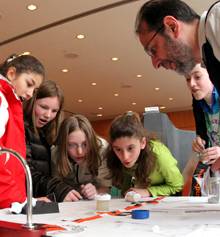 Bob Cava, chair of the chemistry department, used superconductors to levitate magnets for participants in the Science and Engineering Expo. 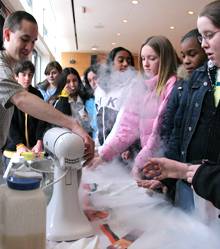 Her hands covered to the wrists with goopy green slime, Princeton graduate student Sasha Myers tugged and rubbed her fingers to free them of a science demonstration that wasn't quite working. Her audience of middle school boys and girls, packed shoulder to shoulder in front of her, was delighted.

Moments later, the recipe was corrected, and Myers deposited neat blobs of green putty into plastic bags for the children to take home. Professor of Chemical Engineering Rick Register jumped in with a crisp explanation of polymers, the long chains of molecules that allow wonders such as Silly Putty, super-absorbing diapers and countless modern plastics and chemicals.

A high-energy mix of fun and science characterized the University's Science and Engineering Expo on Thursday, March 17. More than 900 children from 11 local middle schools streamed through Icahn Lab, McDonnell Hall, Frick Lab and the Friend Center to participate in scores of demonstrations and hands-on activities designed to engage them in subjects from biology to astrophysics.

"We want to stimulate their imaginations and get them to think about new things," said Bob Cava, chair of the chemistry department, who captivated the children with demonstrations of super-powerful magnets. "When you teach science as a demonstration, it's so much more effective and interesting than when you just do it as a lecture or from a book."

Teachers who accompanied the children said the hands-on activities are an excellent way to reinforce and go beyond their classroom teaching. "There is only so much we can teach in our labs," said Allison Ramus, a seventh-grade science teacher at John Witherspoon Middle School in Princeton. "I think we do a good job, but it's different to see it here on such a large scale."

Just walking on campus and talking to Princeton faculty and students is an exciting opportunity for many children, Ramus added. 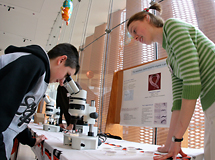 The event reaches students at a critical age when the natural curiosity of young children can be nurtured, but often withers, said Daniel Steinberg, director of outreach at the Princeton Institute for the Science and Technology of Materials (PRISM). "Somewhere between elementary school and high school is a dropping-off point when all of a sudden many children decide they don't like science," Steinberg said. "We'd like to keep that interest going and show them how exciting these fields can be."

It also is important for local teachers to see Princeton scientists and engineers as a resource on which they can draw to improve science education, Steinberg said.

The children looked through microscopes, manipulated DNA and brought home glow-in-the-dark bacteria. They learned about physics while watching a fire extinguisher used as a jet thruster to power a small car. In the Friend Center, computer science graduate students Ge Wang and Ananya Misra mesmerized an auditorium full of children with computer software that manipulated voices and displayed the sound waves in giant, colorful moving images.

The children made rockets by taping a straw to a balloon and sliding the straw onto a string that stretched to the second floor of the Friend Center atrium. They competed to see how high the contraptions would go when they let the air out of the balloons. Graduate student Peter Norgaard of mechanical and aerospace engineering said he was impressed with how carefully the children worked to perfect their designs, changing the length and positioning of the straw. "That is really intelligent engineering. It shows they are really thinking about this problem," Norgaard said as balloons exploded behind him. "Certainly they've pushed the limits of how far you can inflate the balloon."

The expo involved at least 70 faculty members, staff scientists and students from more than a dozen academic departments and programs and the Princeton Plasma Physics Lab. The event also included displays and activities from local companies and organizations, including FMC Corp., Sensors Unlimited and the Stonybrook-Millstone Watershed Association.

The overall event was organized by Ann Sliski, outreach coordinator for molecular biology, who worked with Steinberg, James Olsen of the physics department and Kathryn Wagner of the chemistry department to coordinate events at each location. The expo received funding from the Howard Hughes Medical Institute, the National Science Foundation and the participating departments.

As students moved from one activity to another, their enthusiasm was clear. "It's excellent!" said Bernard, an eighth-grader at Grover Middle School in Princeton Junction. "I made three kinds of bacteria. It was cool that we got personal demonstrations." He and his classmate Sandro said they would think more seriously about careers in science or engineering. "It gives me a new perspective," said Bernard.