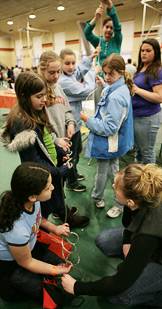 Miniature roller coasters made from plastic tubing provided the right dynamics for teaching physics to area middle schoolers at the University's annual Science and Engineering Expo on Wednesday, March 19. High school students who participated in the Princeton University Materials Academy supervised as visiting youngsters built their own contraptions and raced to see which was best at propelling metal ball bearings through the structures.

Above left: The attraction between simple magnets was more powerful than expected as Robert Cava, the Russell Wellman Moore Professor of Chemistry at Princeton, proved to some Montgomery Township students. 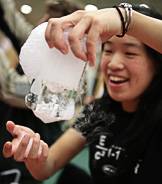 Chemical concepts don't have to be dry, especially when soap bubbles can illustrate phase changes, an idea that was happily demonstrated by Stephanie Lee, a Princeton graduate student in chemical engineering. Below left: A Montgomery Township student was transfixed by a floating superconducting magnet after placing it in an icy broth.     Below right: Energy is not so mysterious once one starts exploring how it works, according to Mansour Shayegan, a Princeton professor of electrical engineering. He readily demonstrated experiments to a student from John Witherspoon Middle School.     Bottom: Soap bubbles, large and small and eternally appealing, drew in students from John Witherspoon Middle School for a physics lesson.     Photos: Denise Applewhite

The three students from Timberlane Middle School in Hopewell had never heard of superconductivity before. Nor did they know anything about the scientist before them.

But the seventh-graders knew a good thing when they saw it.

"Cool," they uttered in unison, as Robert Cava, the Russell Wellman Moore Professor of Chemistry at Princeton, placed one piece of a magnet on Tristan Wheatley's palm and made another "stick" to the underside of the youth's hand just below the other magnet.

"Wow," they mouthed, their lips stuck in "O" shapes for more than the usual millisecond, when Cava, who made worldwide headlines in the late 1980s with his discovery of high-temperature superconducting materials, plopped the miniscule magnetic cube in a bath of bubbling, frosty liquid, causing it to float on air.

"Whoa," they said, when he prodded the magnet, ever so slightly, to spin.

Tristan and his friends, Steven Profetto and Nick Sieczkowski, said Cava's demonstration would stay with them. They might even think some more about what it means when a material loses its resistance to electricity.

It's just the kind of exchange hoped for during Princeton's annual Science and Engineering Expo, where, for a few hours Wednesday, March 19, more than 1,000 middle school students mixed with some of the ablest researchers in the world, doing hands-on science at four campus sites.

"We want the kids to get experience with real science and real scientists," said Daniel Steinberg, director of education and outreach for the Princeton Institute for the Science and Technology of Materials (PRISM), as he stood at the edge of Dillon Gym observing a sea of young faces. "We are trying to inspire them."

Studies show, he said, that many students turn away from science in middle school. "We don't know why," he said. "All we know is that they stop thinking it's cool."

The expo is designed to counter that sad drift away from science. Students attending the program had the opportunity to discover the materials science behind chocolate pretzels, contemplate the physics and physiology of yoga poses, watch glow-in-the-dark bacteria communicate with each other and investigate the chemistry of bubbles. 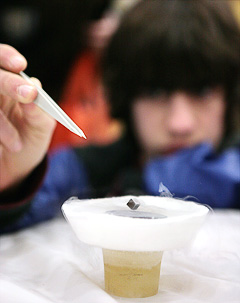 Dozens of high-powered researchers from Princeton and elsewhere oversaw hands-on activities and demonstrations that illustrated the connections between the everyday world and the fields of biology, chemistry, environmental science, engineering and materials science.

"I actually heard one middle school girl say how surprised she was at how exciting the experiments were," said Stephanie Lee, a Princeton graduate student in chemical engineering, who explained phase changes to students with a tabletop concoction of hand soap and dry ice. "I was thrilled."

The event is geared perfectly for the age group, according to Theodore Casparian, a math teacher at John Witherspoon Middle School in Princeton. "You have to grab them quickly," he said. "What's great about this is that you have complex concepts presented in very easy-to-understand, accessible demonstrations."

Grace Singley and Emma Nuyts, two eighth-graders from Montgomery Upper Middle School, liked what they saw. "In school, you are presented with the basics of science," said Grace, as she closely observed a robotics demonstration. Classroom presentations, she said, can be dry sometimes. "But there's so much variety here," added her friend, Emma. "It really shows you that real science can be so interesting." 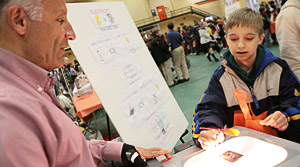 Mansour Shayegan, a Princeton professor of electrical engineering, got the idea. Standing at a table, one of many spread across the gym floor like checkers on a checkerboard, Shayegan wanted to convey the notion that energy manifests itself in many different ways.

He taught through props -- hand cranks, a homemade battery, solar cells and wires -- that produce mechanical, chemical and electrical energy. He let students visiting his table play, while he guided them. A hand crank with wires attached to a light bulb showed mechanical energy transformed into electrical. A contraption containing vinegar and galvanized nails connected with a crude speaker illustrated that chemical energy could become mechanical energy.

The actions were simple; the message deep. "Everything you see around you is like that," Shayegan said. "It's all about the transfer of energy." 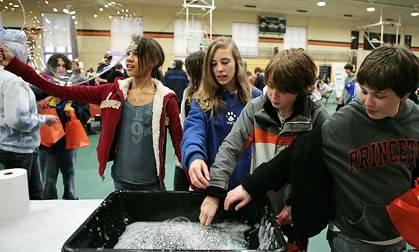