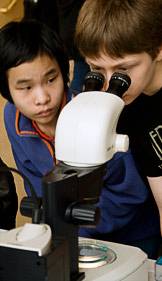 More than 1,200 middle schoolers dug into science experiments as part of the 2009 Science and Engineering Expo that took place at four sites on campus March 19. The event is intended to counter flagging interest in those fields by stimulating students' curiosity at a crucial time in their intellectual development. At "Exploration Stations" like these, students could get an up-close view of science, including a peek at fluorescing proteins, part of an activity highlighting Nobel Prize-winning science.

More than 1,200 middle schoolers dug into science experiments as part of the 2009 Science and Engineering Expo that took place at four sites on campus March 19. The event is intended to counter flagging interest in those fields by stimulating students' curiosity at a crucial time in their intellectual development. At "Exploration Stations" like these, students could get an up-close view of science, including a peek at fluorescing proteins, part of an activity highlighting Nobel Prize-winning science.

With a turn of her wrist, Mandy Kauffman wafted a test tube containing some clear goop with a pungent odor before the faces of three students and watched to see what they would do next.

"It's not bad," said Tamara Baldwin, tentatively. "It smells like an air freshener!" said Enjolie Borges. "I liked it," said Jacqueline Smith afterward.

For the three seventh-graders from Gregory Elementary School in Trenton, this close encounter with the substance, benzaldehyde, was their first brush with the concept of chemotaxis, the mysterious phenomeon by which organisms are either drawn to or repelled by chemical signals.

Certain kinds of worms, it turns out, really like this stuff. And there's some deep science in that, which is where Kauffman, a Princeton University graduate student, is leading students when she shocks them with the odor of the worm-luring substance.

The girls were touring hands-on science exhibits like this one in the Icahn Laboratory as part of the campus-wide 2009 Science and Engineering Expo. The event drew more than 1,200 middle school students to exhibits in McCosh Hall, Dillon Gym and McDonnell Hall, in addition to Icahn.

The idea of the expo is to make science come alive for kids at a crucial developmental stage. In Icahn, students splattered petri dishes with pondwater and constructed models of viruses from marshmallows. They got an up-close view of science, including a peek at fluorescing proteins, part of an activity highlighting Nobel Prize-winning science. And they could learn about malaria, dengue virus and sheep brains, too.

The dengue virus may be deadly but students can safely learn about it by constructing toothpick-and-marshmallow models of its structure. Active interactions for students, from constructing viral structures with marshmallows to watching worms crawl toward a substance, make concepts come alive for students and engage them in topics, educators say. 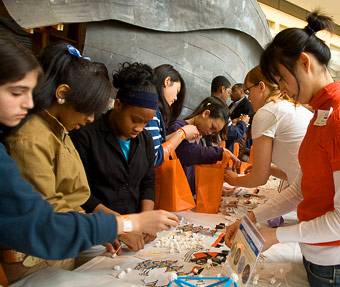 "I think showing students actual experiments helps them to realize that everything in their science textbooks is based on research, which may help to get them to ask more questions about what they're being told in the future, rather than take everything at face value," Kauffman said.

She's perfectly willing to explain chemotaxis and her own experiments using roundworms.

But it's a bit more thrilling, she said, to watch chemotaxis in action. She starts by grabbing visitors' attention with the smelly test tube. Then she poses questions. What will happen, she asks, if she drops some benzaldehyde into a petri dish containing roundworms?

Peeking into the microscope, students could see worms crawl in unison toward the drops and witness science in action. "They really get a kick out of seeing crawly worms," she said.

"When you see more things, it helps you know so much more," Baldwin said. "This gives you a sense of what science is." 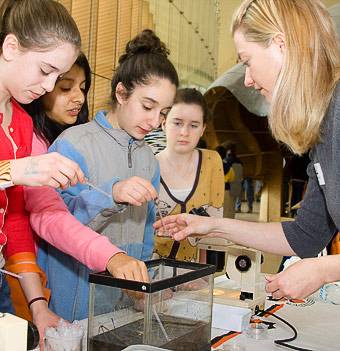 To Manuel Llinás, an assistant professor of molecular biology and the Lewis-Sigler Institute for Integrative Genomics, such tactile and upfront experiences are precisely what are needed to involve students in science. "Most kids are not going to see these types of experiments or equipment anywhere else," said Llinas, surveying the scene in Icahn. "How many people have microscopes or anything like this at home?"

JoEllen Beresh, a Princeton research specialist, said she found that students were mesmerized by the simple observation of drops of pond water under a microscope. She had collected some samples earlier from a pond near the Graduate College. "It makes you appreciate nature more," said Allison Hubert, a seventh-grader from the Princeton Charter School, after taking a peek through Beresh's microscope.

And there's a joy to connecting with students and motivating them to find the excitement in science, according to Alex Ochoa, a graduate student, who was narrating science facts to students watching a biology video on a large display wall. As a Mexican-American, he said, he is particularly conscious of being a role model and wants to inspire other minority youth to become scientists.

Alex Ochoa, a Princeton graduate student, explained the wonders of a living cell to a fascinated student from Randolph Middle School and his mother by projecting a video on a large display wall.