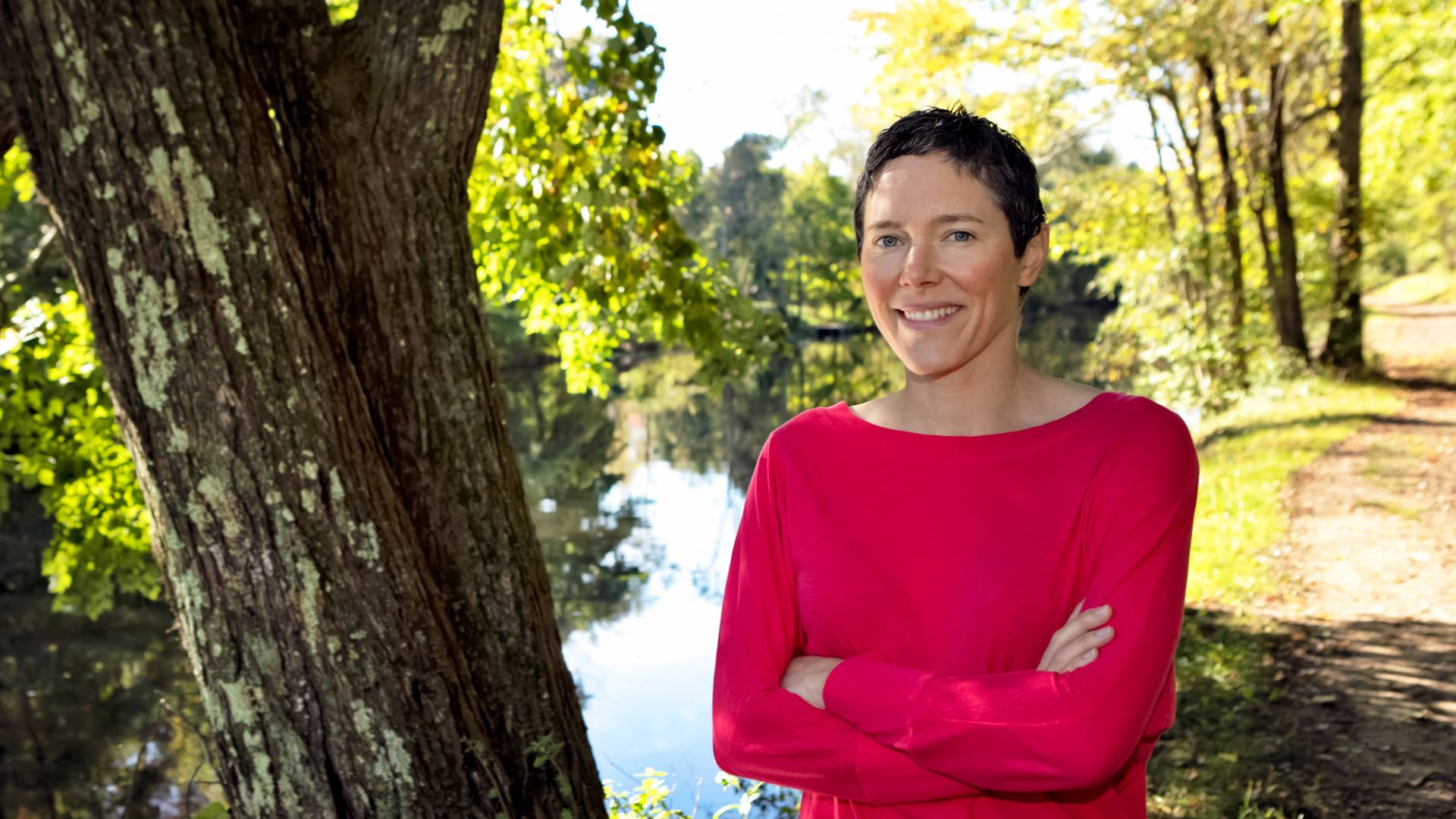 Carolyn “Lindy” McBride has won two major grants to study how and why Zika-bearing mosquitoes feed almost exclusively on humans.

Few animals specialize as thoroughly as the mosquitoes that carry diseases like Zika, malaria and dengue fever.

In fact, of the more than 3,000 mosquito species in the world, most are opportunistic, said Carolyn "Lindy" McBride, an assistant professor of ecology and evolutionary biology and the Princeton Neuroscience Institute. They may be mammal biters, or bird biters, with a mild preference for various species within those categories, but most mosquitoes are neither totally indiscriminate nor species-specific. But she is most interested in the mosquitoes that scientists call “disease vectors” — carriers of diseases that plague humans — some of which have evolved to bite humans almost exclusively.

McBride has won two large grants just this month to support her ongoing research into disease vector mosquitoes. On Oct. 2, the National Institutes of Health announced that McBride had received one of 33 NIH Director's New Innovator Awards for “unusually creative scientists with highly innovative research ideas at an early stage of their career,” pledging $2.4 million to her research over the next five years. And on Oct. 23, the New York Stem Cell Foundation named her one of their six NYSCF-Robertson Investigators for 2018, announcing that they will provide $1.5 million over five years to each of these “promising early career scientists whose cutting-edge research holds the potential to accelerate treatments and cures.”

McBride studies several mosquitoes that carry diseases, including Aedes aegypti, which is the primary vector for dengue fever, Zika and yellow fever, and Culex pipiens, which carries West Nile virus. A. aegypti specializes in humans, while C. pipiens is less specialized, allowing it to transmit West Nile from birds to humans.

“It’s the specialists that tend to be the best disease vectors, for obvious reasons: They bite a lot of humans,” said McBride. She’s trying to understand how the brain and genome of these mosquitoes have evolved to make them specialize in humans — including how they can distinguish us from other mammals so effectively. 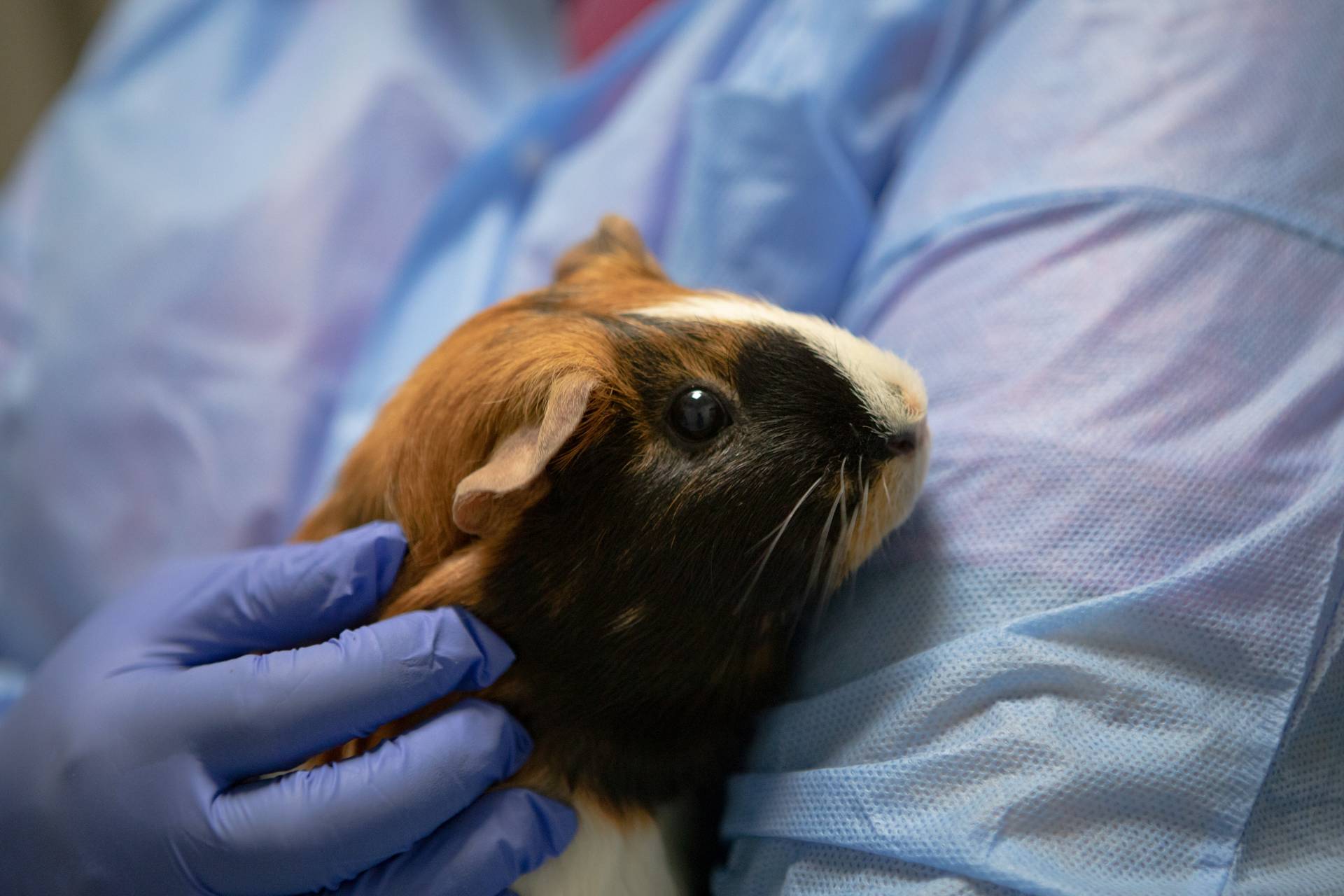 Researchers in McBride’s lab often waft air across guinea pigs Molly (seen here) and Mia (not pictured), to collect their odor for mosquito research. In experiments, mosquitoes are given the choice between the guinea pigs’ odor and human odor; neither the humans nor the guinea pigs are directly exposed to mosquito stings.

In a joint press release in August, New Jersey’s two senators praised McBride’s work — though not by name, since the grants had not been publicly announced yet. “This grant funding will help protect public health by supporting groundbreaking research at Princeton into the mosquito species responsible for spreading illnesses like Zika, dengue, yellow fever and West Nile virus, and may ultimately hold the key to preventing the transmission of these diseases,” said Sen. Cory Booker, who was Princeton’s 2018 Class Day speaker.

“This funding will help us get a better understanding of mosquito-borne infections, such as the West Nile virus which has already infected several people in our state,” said Sen. Bob Menendez. “It is important that we fully understand mosquitoes and the viruses they carry so we can work to aggressively prevent the spread of further diseases and protect all New Jerseyans.”

To help her understand what draws human-specialized mosquitoes to us, McBride compares the behavior, genetics and brains of the Zika mosquito to an African strain of the same species that does not specialize in humans.

The NYSCF grant will support a basic science investigation into how animal brains interpret complex aromas. That’s a more complicated proposition than it first appears, since human odor is composed of more than 100 different compounds — and those same compounds, in slightly different ratios, are present in most mammals.

“Not any one of those chemicals is attractive to mosquitoes by itself, so mosquitoes must recognize the ratio, the exact blend of components that defines human odor,” said McBride. “So how does their brain figure it out?”

The NIH grant is funding more applied research into what combination of compounds attracts mosquitoes. That could lead to baits that attract mosquitoes to lethal traps, or repellants that interrupt the signal.

Most mosquito studies in recent decades have been behavioral experiments, which are very labor intensive, said McBride. “You give them an odor and say, ‘Do you like this?’ and even with five compounds, the number of permutations you have to go through to figure out exactly what the right ratio is — it’s overwhelming.” With 15 or 20 compounds, the number of permutations skyrockets, and with the full complement of 100, it’s astronomical.

To test the odor preference of mosquitoes, McBride’s lab has primarily used guinea pigs, small mammals with a different blend of many of the same 100 odor compounds of humans. Researchers gather their odor by blowing air over their bodies, and they then present mosquitoes with a choice between eau de guinea pig and a human arm. Human-specialized “domestic” A. aegypti mosquitoes will go toward the arm 90 to 95 percent of the time, said McBride, but the African “forest” A. aegypti mosquitoes are more likely to fly toward the guinea pig aroma.

In another recent experiment, then-senior Meredith Mihalopoulos of the Class of 2018 recruited seven volunteers and did "preference tests" with both forest and domestic A. aegypti mosquitoes. She let the mosquitoes choose between herself and each of the volunteers, finding that some people are more attractive to the insects than others. Then Alexis Kriete, a research specialist in the McBride lab, analyzed the odor of all the participants. They showed that while the same compounds were present, each human was more similar to each other than to the guinea pigs.

“There’s nothing really unique about any animal odor,” said McBride. “There’s no one compound that characterizes a guinea pig species. To recognize a species, you have to recognize blends.”

With their new funding, the McBride lab will be expanding to include other mammals and birds in their research. Graduate student Jessica Zung is working with farms and zoos to collect hair, fur, feather and wool samples from 50 animal species. She hopes to extract odor from them and analyze the odors at a Rutgers University facility that fractionates odors and identifies the ratio of the compounds. By inputting their odor profiles into a computational model, she and McBride hope to understand how exactly mosquitoes may have evolved to distinguish humans from non-human animals.

The grants will also support an entirely novel approach being developed by graduate student Zhilei Zhao: imaging mosquito brains at very high resolutions to figure out how a mosquito identifies its next victim. “What combination of neural signals in the brain cause the mosquito to be attracted or repelled?” McBride asked. “If we can figure that out, then it’s trivial to screen for blends that can be attractive or repellant. You put the mosquito up there, open up its head, image the brain, pop one aroma after another, and watch: Does it hit the right combination of neurons?”

Key to that study will be the imaging equipment provided by Princeton’s Bezos Center for Neural Circuit Dynamics, said McBride. “We can walk over there and say we want to image this, at this resolution, with this orientation, and a few months later, the microscope is built,” she said. “We could have bought an off-the-shelf microscope, but it would have been so much slower and so much less powerful. Help from Stephan Thiberge, the director of the Bezos Center, has been critical for us.”

McBride began her biology career studying evolution in butterflies, but she was lured to disease vector mosquitoes by how easy they are to rear in the lab. While the butterflies McBride studied need a year to develop, A. aegypti mosquitoes can go through an entire life cycle in three weeks, allowing for rapid-turnaround genetic experiments.

“That’s what first drew me to mosquitoes,” said McBride. “One of the surprises for me has been how satisfying it is that they have an impact on human health. That’s certainly not why I got into biology — I was studying birds and butterflies in the mountains, as far away from humans as I could get — but I really appreciate that element of mosquito work now.

“But what is still as exciting is how easily we can manipulate mosquitoes to test hypotheses about how new behaviors evolve. … We can create transgenic strains, we can knock out genes, we can activate neurons with light. All these things have been done in model systems, like mouse and fly, but never in a non-model organism, never in an organism — I’m showing my bias here — with such interesting ecology and evolution.”