Women could prevent contracting the mosquito-borne Zika virus while pregnant by timing the first months of pregnancy with seasonal declines in mosquito activity, according to a new paper. The paper is the first to suggest that women in the numerous countries affected by the Zika virus epidemic can still safely pursue motherhood rather than forgo pregnancy altogether.

Since 2015, several nations in the Caribbean and Central and South America have been experiencing an epidemic of Zika virus disease or Zika fever, which produces mild fever in adults. Because the disease is linked to miscarriages and birth defects such as microcephaly and brain malformation, however, women in many of the affected nations have been urged to avoid pregnancy until the virus can be treated. No Zika treatment or vaccine exists.

But the Zika virus — like other mosquito-borne illnesses — is likely sensitive to the breeding cycle of its primary carrier, Aedes aegypti, the yellow fever mosquito, according to a perspective published July 28 in the journal PLoS Biology. In the tropics, mosquito populations and reproduction decline during the dry season when low rainfall and evaporation deny the insects the ample standing water they require to breed. Thus, female mosquitoes — which are responsible for bites — are less inclined to feed on the blood they need to support egg production. 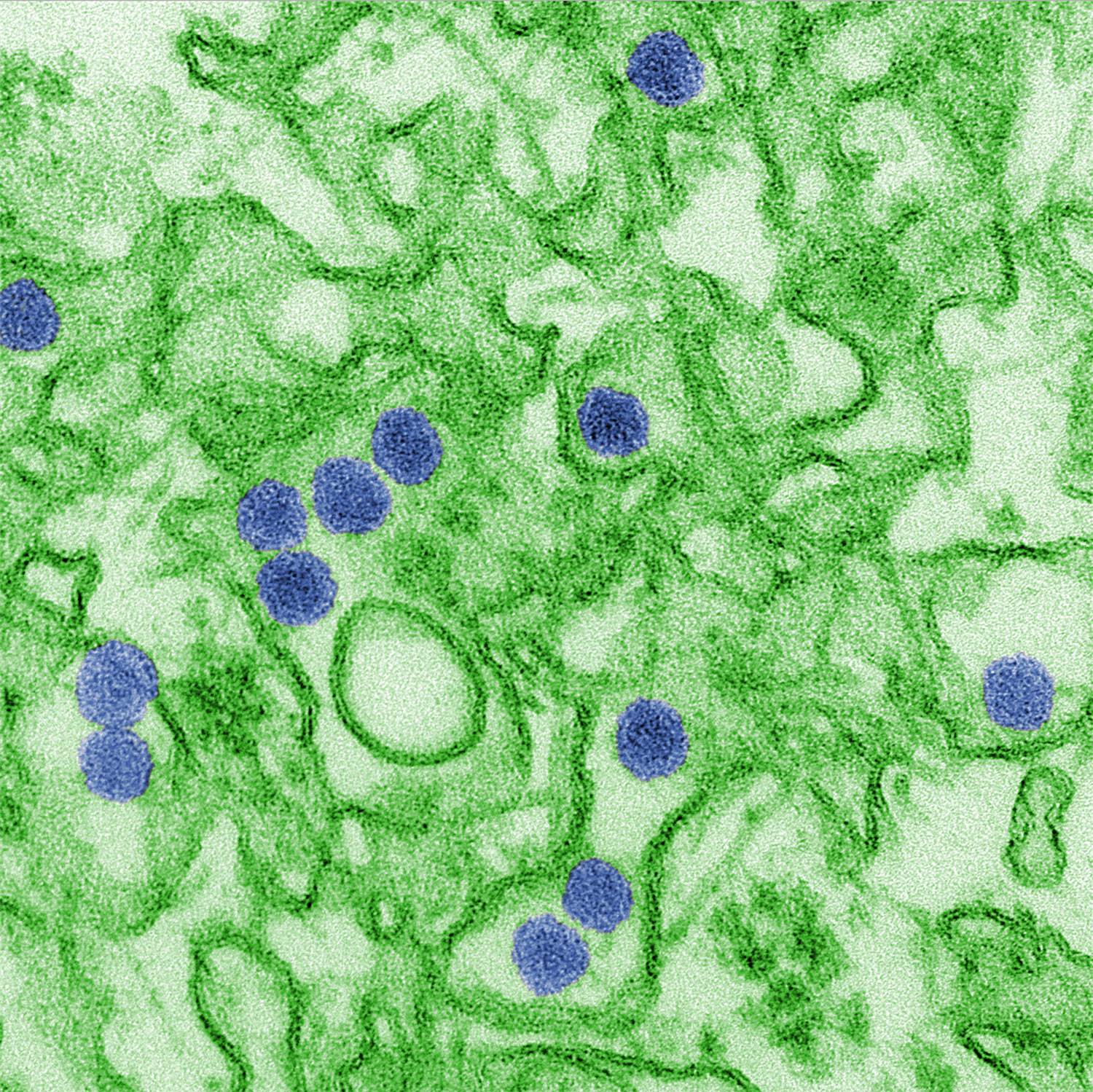 Princeton University research suggests that women could prevent contracting the mosquito-borne Zika virus (pictured) while pregnant by timing the first months of pregnancy with seasonal declines in mosquito activity. The population and reproduction of the virus' carrier, Aedes aegypti, or the yellow fever mosquito, lessens during the annual dry season in tropical areas when the standing water the insect needs to breed is scarce. Since 2015, several nations in the Caribbean and Central and South America have been experiencing an epidemic of Zika virus disease, which is linked to various birth defects. (Image courtesy of the Centers for Disease Control and Prevention/Cynthia Goldsmith)

Paper author Micaela Martinez, a Princeton University researcher who studies disease seasonality, suggests that this period of low mosquito activity, or "trough," could provide women in Zika-afflicted countries a window during which they could safely conceive. She determined that timing the first 20 weeks of pregnancy with the trough of mosquito activity could greatly reduce the chances of Zika virus transmission. Existing data suggest that a fetus is most vulnerable to Zika-related birth defects during the first months of pregnancy.

Using past birth data for individual countries, Martinez estimated that planned seasonal conception for as few as 3 percent of births could prevent Zika-related birth defects in thousands of babies. The risk could be reduced for approximately 1,000 births per year in Puerto Rico, and more than 88,000 per year in Brazil.

"Instead of telling women in these countries to not get pregnant, what if we take advantage of the fact that the virus can be avoided if pregnancy is aligned with a time of year when there are fewer mosquitoes?" said Martinez, who is a postdoctoral researcher in Princeton's Department of Ecology and Evolutionary Biology and an affiliate of the Woodrow Wilson School of Public and International Affairs.

"All other animals time their reproduction to match favorable environmental conditions. Why couldn't we?" she said. "Mosquitoes are seasonal, which most people are quite aware of, but we tend not to think about that in terms of preventing infections."

Martinez developed a computer software program that local governments, health care workers or scientists could use to identify by calendar week the window of opportunity for safe conception in their region. Once they enter mosquito-activity data — or Zika virus-transmission data — for their area into the program, it would calculate the ideal time for women to conceive. 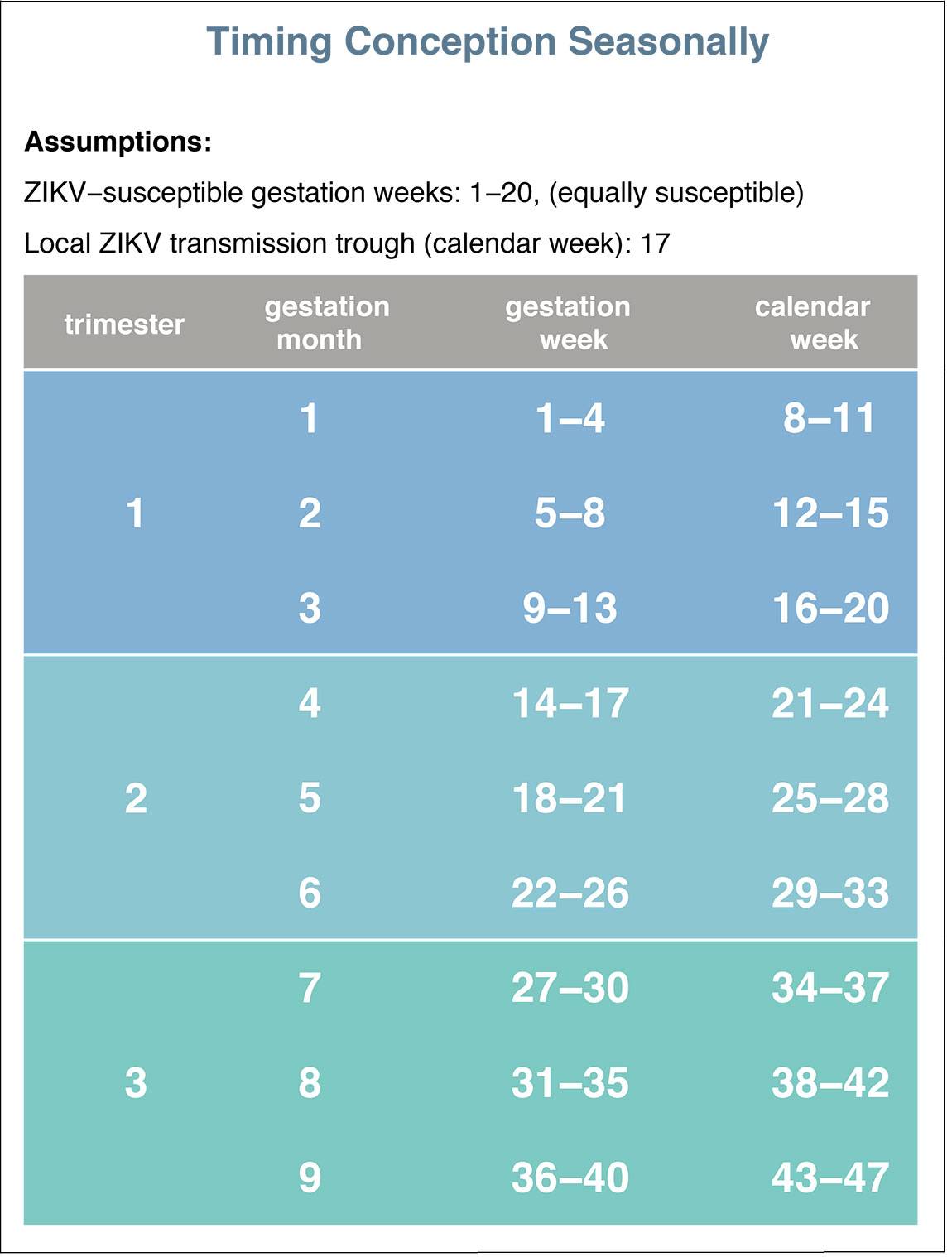 The paper proposes that timing the first 20 weeks of pregnancy with the low point of mosquito activity could greatly reduce the chances of Zika-virus transmission. A computer software program the researcher developed would indicate to local governments, health care workers or scientists the ideal time for women to conceive based on mosquito-activity — or, ideally, Zika virus transmission — data for their region. The above chart assumes (top) that fetuses are most susceptible to Zika virus in the first 20 weeks of gestation, and that the low point of Zika virus (ZIKV) transmission is calendar week 17. To time the most vulnerable weeks of gestation (center column) with the calendar weeks that coincide with the calendar weeks that exhibit declining Zika transmission (right column), conception would ideally occur during calendar week 8. (Image by Micaela Martinez, Ecology and Evolutionary Biology)

Zika virus belongs to the genus flavivirus and is related to numerous mosquito-borne illnesses such as West Nile virus, yellow fever and dengue fever. The prevalence of these viruses coincides with the peaks and troughs of A. aegypti's breeding season, Martinez reported.

Martinez reviewed data from Puerto Rico taken during a 2013 outbreak of dengue fever infection, comparing it with monthly mosquito-population data collected some years earlier. She found that the April low point of dengue-virus infection mirrored the trough for blood-engorged female mosquito populations. The high point of infection, however, paralleled a peak in mosquito activity recorded between October and December.

Alex Perkins, a University of Notre Dame assistant professor of biological sciences, said that coordinating conception with mosquito populations would likely be most effective when coupled with other measures for preventing Zika virus, especially controlling mosquitoes.

"Vector control is essentially the only tool that we have at the moment to combat Zika virus, and doing so more aggressively at certain times of year — or in certain populations — could interact with modifications of the timing of conception proposed here," said Perkins, who is familiar with the research but had no role in it.

More evidence of the Zika virus' seasonality is needed before the plan Martinez proposes could be carried out, Perkins said. But if this approach does turn out to help prevent Zika virus disease, then it could lead to a greater understanding of how seasonal cycles can be used to combat disease more generally, he said.

"It may take a little more time for observers to see clear evidence of predictable seasonality in Zika virus transmission and to better understand its drivers before making such specific and nuanced recommendations," Perkins said.

"That said, the more recurrent that seasonal epidemics of Zika virus become, the more seriously people will start to consider strategies such as the one proposed here," he said. "With additional research, the ideas proposed in this article could tell us quite a lot about the extent to which knowledge about the seasonality of transmission could be used to our advantage to minimize the risk of severe disease in vulnerable populations."

Seasonally planned conception could help empower women living in uncertain and fearful circumstances, Martinez said. It provides an option that is within their control and more tenable than avoiding pregnancy for the foreseeable future, she said. Once pregnant, women in Latin America face some of the strongest restrictions in the world on abortion, Martinez said.

"I think women are scared," Martinez said. "This is a way to empower women by giving them an option. Although timing pregnancy to match the mosquito low season might be difficult to implement, it's better than telling women not to get pregnant for years until there's a vaccine.

"Latin American women are in need of some social solutions and those communities are strong enough to help implement something like this," she said. "Until there's a vaccine, there really aren't many other options."

The paper, "Preventing Zika Virus Infection During Pregnancy Using a Seasonal Window of Opportunity for Conception," was published July 28 by PLoS Biology. The work was supported by a National Science Foundation postdoctoral fellowship in biology (award no. 1523757).