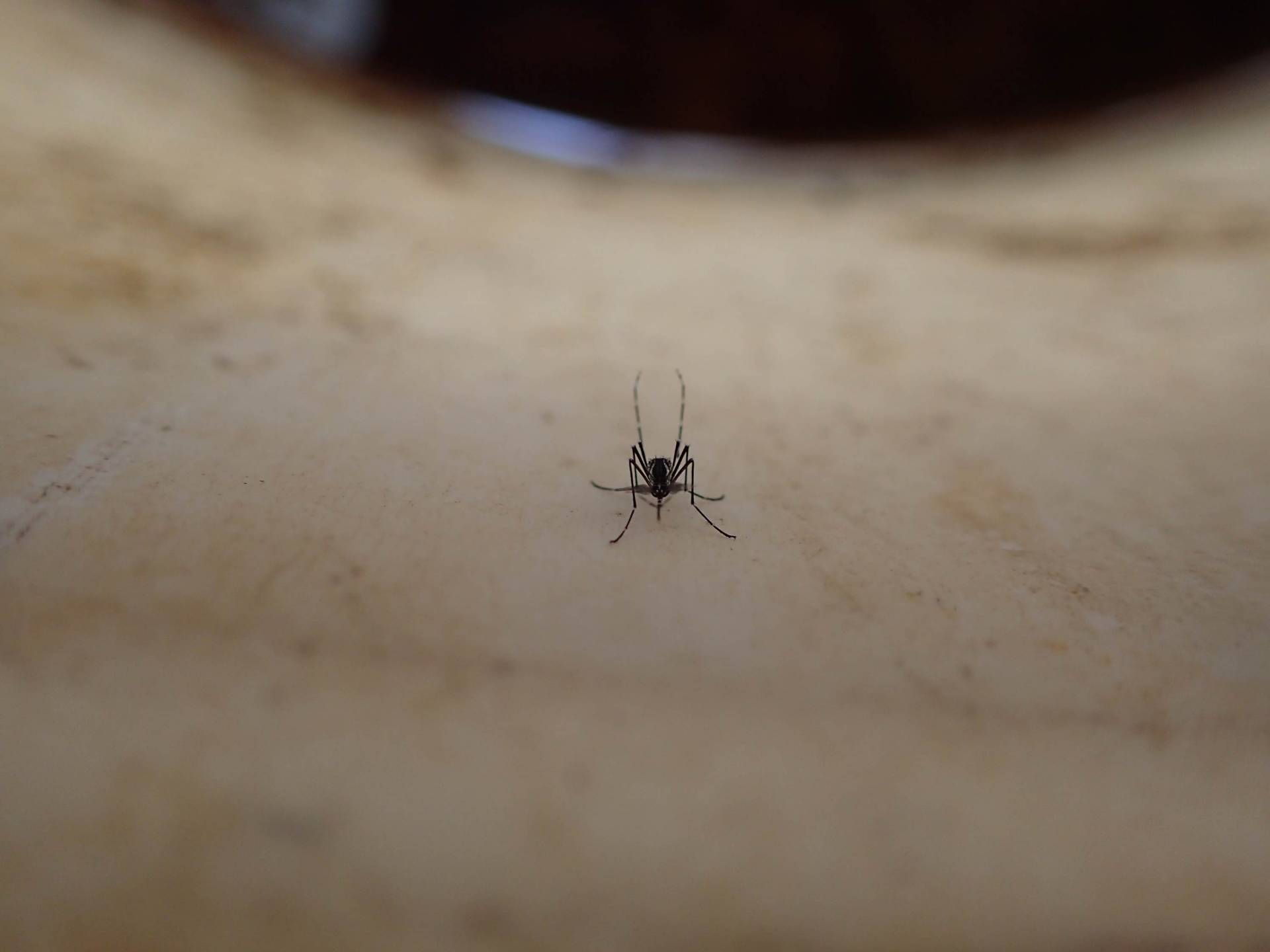 Jerimiah Oetting for the Office of the Dean for Research

Aedes aegypti mosquitoes like this one specialize in biting humans and are the primary vectors for diseases including dengue, Zika, chikungunya and yellow fever. With the help of international collaborators, Princeton postdoctoral researcher Noah Rose and Professor Carolyn McBride revealed that intense dry seasons and regional urbanization drive these mosquitoes’ tendency to seek human hosts. Their new paper provides insight into how this behavior evolved and suggests that increased urbanization may lead more mosquitoes to seek humans in the future.

There are two paths. One leads to the arm of Noah Rose, a postdoctoral research fellow at Princeton University. The other leads to a guinea pig.

For some species of mosquitoes, their preference for humans reveals something about their evolution — and the ecology of their ancestral homes. New research, published July 23 in the journal Current Biology, identifies the genetic components underlying Aedes aegypti mosquitoes’ affinity for humans and indicates that their human-seeking behavior can be traced to two environmental conditions: climate and urbanization.

The findings could explain why mosquitoes evolved human preference — and how climate change and swelling urbanization might drive greater human attraction in the future.

“Mosquito evolution is related to human history,” said Rose, the first author of the study, which was led by researchers at Princeton and included an international team of collaborators. “They evolved in response to changes in how humans live, they spread around the world in response to historical events, and they’re spreading disease in a way that reflects that.”

A small fraction of the roughly 3,500 known species of mosquitoes evolved to specialize in biting humans. It’s these species that are responsible for the vast majority of mosquito-borne illnesses suffered around the world. One example, A. aegypti, is the main vector for diseases including dengue, Zika, chikungunya and yellow fever. This species spreads diseases that make over 100 million people sick each year.

“What sets this species apart is that it specifically targets humans,” said Carolyn “Lindy” McBride, an assistant professor of ecology and evolutionary biology and neuroscience at Princeton University and the senior author of the paper.

But not all individuals within this species show the same affinity for humans. McBride, Rose and their colleagues wanted to explore what ecological factors might drive some of them to hunt for humans specifically.

To do this, the researchers gathered A. aegypti eggs from 27 locations, representing the diverse range of habitats found across the species’ native range in sub-Saharan Africa. These locations included land within seven countries, and varied from dense urban areas to remote forests. They also ranged climactically, from hot and dry to wetter and cooler areas.

The researchers created 50 lab-based colonies of mosquitoes derived from the eggs they collected. Then, they put the mosquitoes in a two-port olfactometer — a device that encourages  mosquitoes to follow their sense of smell along one of two paths: a tube leading to a human — represented by Rose’s arm— and another leading to a guinea pig. (Strategically placed screens prevented harm to Rose and the guinea pigs in this study). 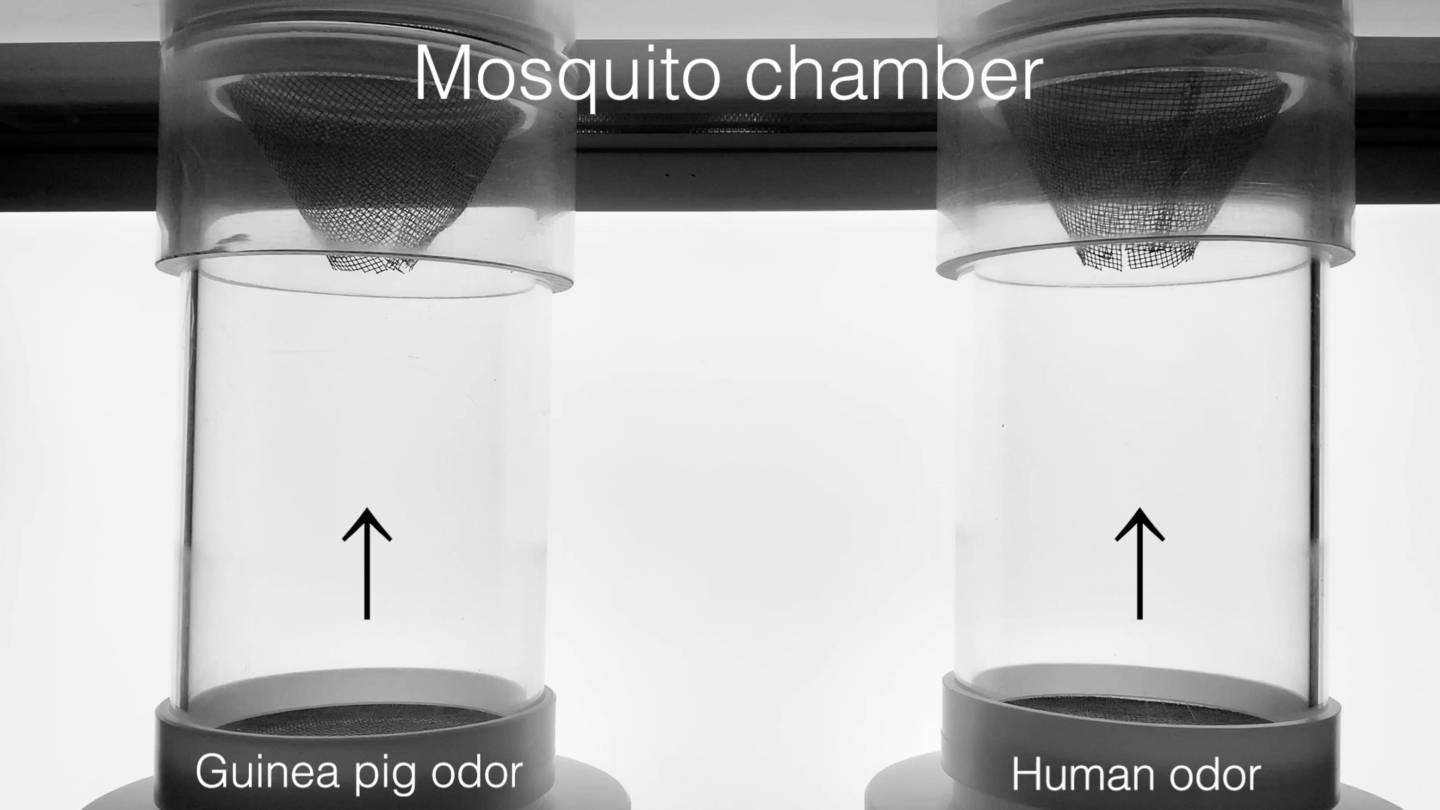 The McBride lab’s two-port olfactometer tempts mosquitoes with the odor of different hosts and allows scientists to observe their choices. Mosquitoes in this trial show a clear preference for human hosts (right) over guinea pigs. The researchers combined these observations with other types of data to identify the factors that may lead to human preference.

The scientists paired their results with ecological data from the locations where they collected the mosquito eggs. The results showed that mosquitoes from areas with long and intense dry seasons preferred humans the most. To a lesser extent, high regional human population density was also a predictor of mosquitoes that were more attracted to humans.

“It wasn’t living with people per se that made mosquitoes specialize in biting humans,” Rose said. “It was actually them adapting to these really hot and dry places where they lived intimately with humans.”

The finding supports a theory that mosquitoes evolved to seek out humans because of our unique ability to store water through the dry seasons. 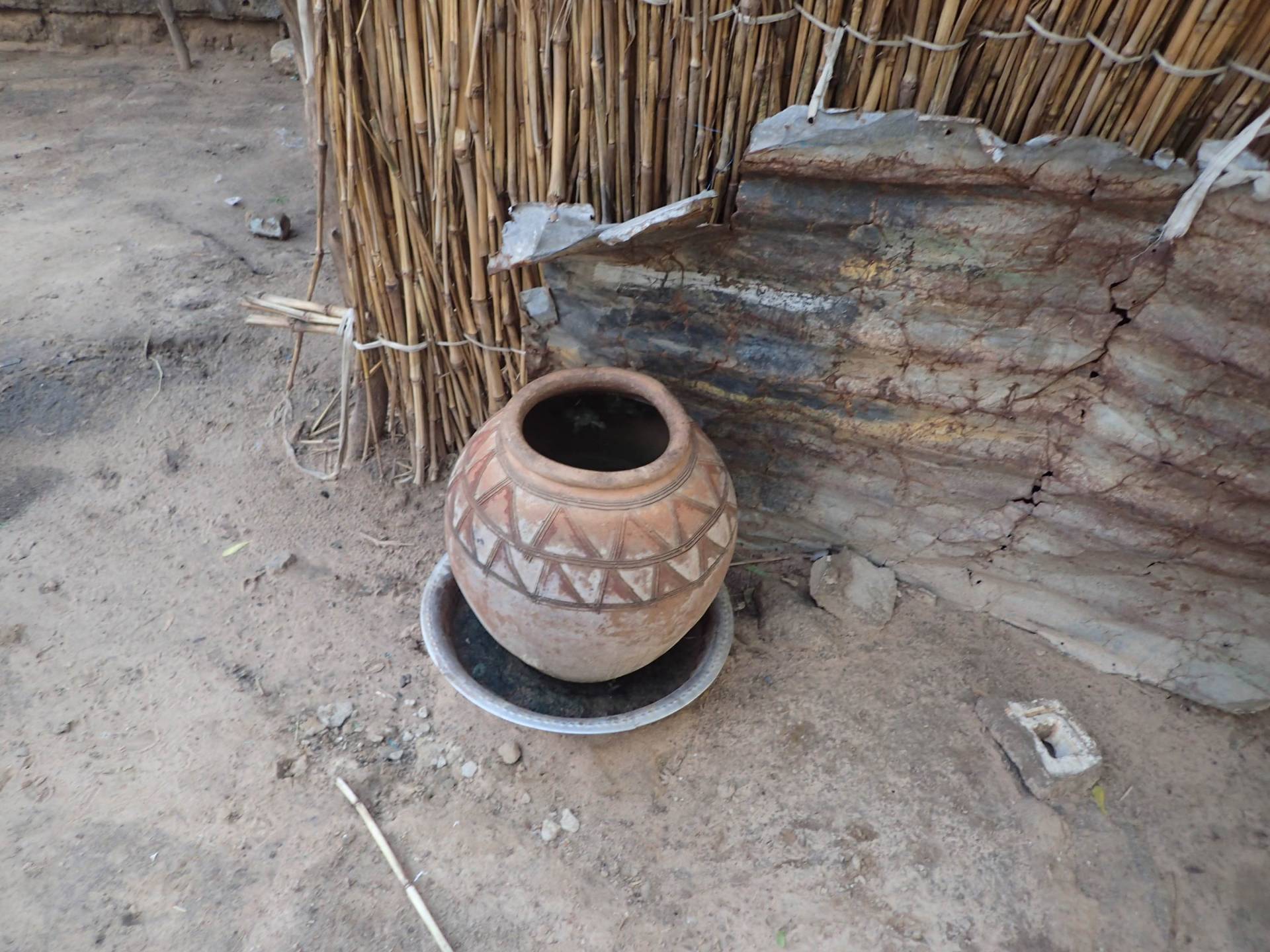 Ceramic water storage containers, like this one seen in Senegal, provide ideal breeding conditions for mosquitoes and may have led to human-seeking behaviors in areas where water was scarce.

Female mosquitoes, the ones responsible for all the bites, require blood to produce their eggs. But their eggs also require water to hatch. And humans, by storing water in accessible locations when it was scarce, provided mosquitoes with all of the blood and water they needed. For those mosquitoes, seeking out human smells became an advantageous trait.

“That’s really interesting, because it gives us this exciting picture of how the jump to human hosts happened,” Rose said.

“When we see those genes flowing into new populations, mosquitoes in those populations start biting humans,” explained Rose.

Their findings produced a model to forecast how mosquito behavior might change within the next 30 years. With rapid urbanization in sub-Saharan Africa, the shift in mosquito preference towards human hosts is likely to increase, the authors say.

“On the scale of decades, cities are doubling and tripling in size,” Rose said. “Rapid urbanization is likely to drive increases in human-biting behavior.”

Climate change is another factor, increasing the rate of desertification and causing more of the conditions that produced human-biting behaviors. But the rate of urbanization in sub-Saharan Africa will outpace climate change, the authors argue.

“[Climate] is changing, but it’s not changing quickly enough and in the right ways to cause major changes in preference [by 2050],” Rose said.

Daniel Neafsey, an assistant professor at the Harvard T.H. Chan School of Public Health who was not involved in the study, said the paper highlights how humans have an impact on the ecology that drives mosquito-borne diseases.

Collaboration was a key part of completing the research, said Rose, not just across disciplines, but across the seven African countries where the work took place. Researchers from institutions in Senegal, Burkina Faso, Ghana, Nigeria, Gabon, Uganda and Kenya all contributed. Rose said they relied heavily on these scientists.

“There are a lot of collaborators in this work, and that helped an enormous amount,” Rose said.