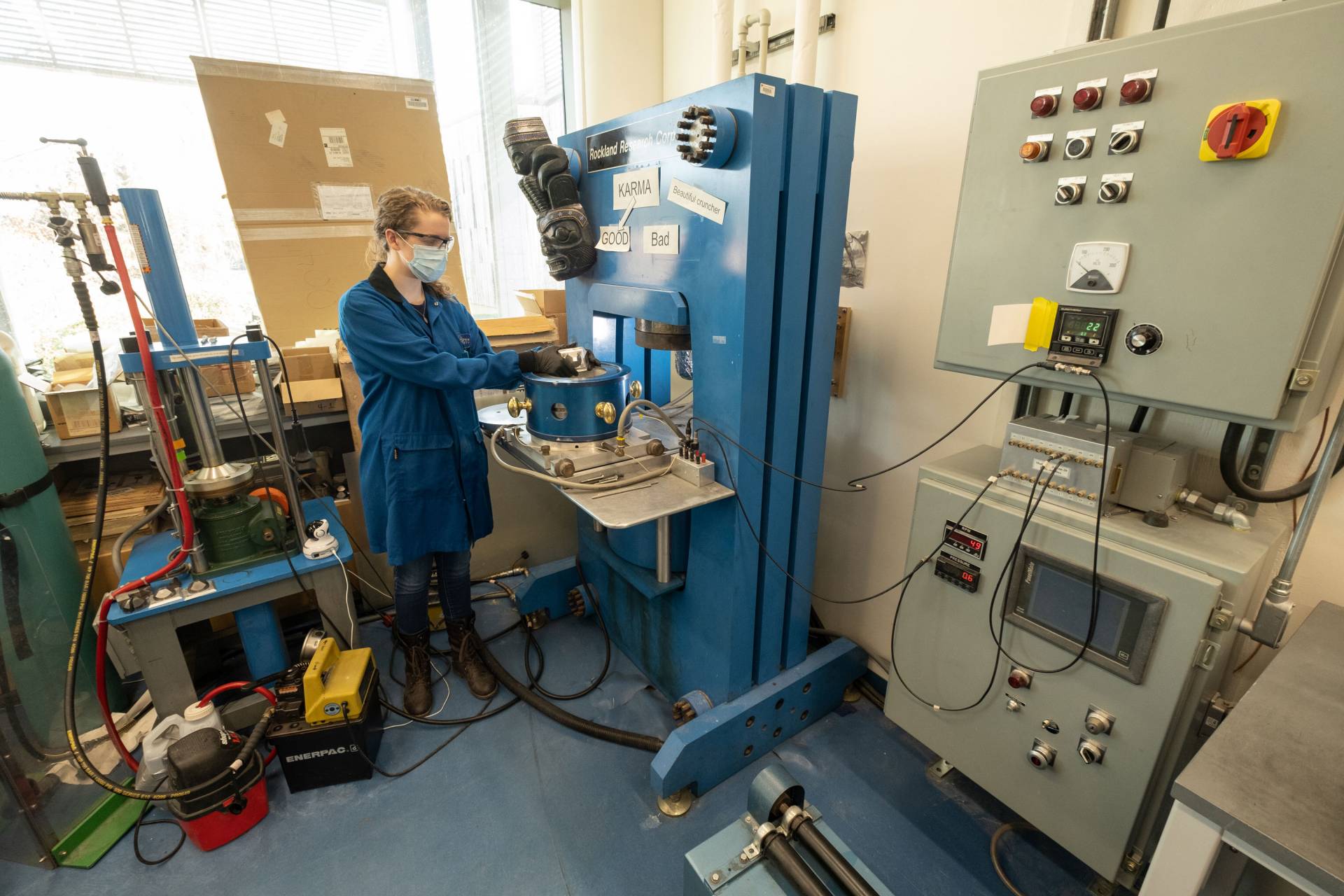 Graduate student Kelly Powderly and other researchers working with Princeton chemist Robert Cava use a “rare and crazy” machine known as Karma that subjects materials to the kinds of intense temperatures and pressures that occur deep underground, allowing them to discover materials and structures that wouldn’t otherwise exist on Earth's surface.

It turns out there is such a thing as a “karma” machine, and it lives on the ground floor of Frick Laboratory.

The high-pressure, high-temperature furnace weighs 12,000 pounds, exerting as much pressure in a corner of the lab as three cars stacked on their noses. It’s the same age as some of the researchers working with it. It occasionally stops working for no discernible reason. And it requires fine motor skills and a surfeit of good cheer to keep it running.

Why do Robert Cava and the chemists in his lab grapple with this “rare and crazy” apparatus? Because it helps chemists discover new materials by subjecting them to the kinds of intense pressures that occur 200 miles under the planet’s surface. Or 99,000 times the pressure we experience walking around Princeton’s campus. Or 90 times the pressure at the bottom of the Mariana Trench, the deepest point in the ocean.

These pressures can change the relative sizes of atoms. In solid-state chemistry, size has much to do with a compound’s stability.

For Kelly Powderly, the fourth-year graduate student entrusted with running and maintaining “Karma,” the apparatus is a wonder, the embodiment of an extreme force — high pressure — that has long fascinated her. (Listen to Powderly describe Karma's capabilities.)

“There’s a lot of high-pressure work in the geophysics and geology communities because they’re using it to understand what’s going on under the surface of the earth, as temperatures and pressure get higher,” said Powderly, who works with Cava, the Russell Wellman Moore Professor of Chemistry. “But having a multi-anvil press in your own lab, about 40 steps from your desk, is not a common thing in a chemistry department.

“Most solid-state chemistry occurs in a lab at atmospheric pressure, and you vary the temperature in order to get different materials,” she added. “But in this case, we can actually use pressure as another variable to stabilize new structures that might be really interesting, or to get a reaction between elements that you wouldn’t get otherwise.”

Cava and his research team make and characterize materials with the potential for exotic physical and electronic properties, as for superconductivity or magnetism, using the variables of high pressure and high temperature to uncover them. With Karma, Powderly can pressurize materials up to 10 gigapascals (GPa). Atmospheric pressure on the planet’s surface equates to about 101,000 pascals; Karma can pressurize materials about 99,000 times that amount. 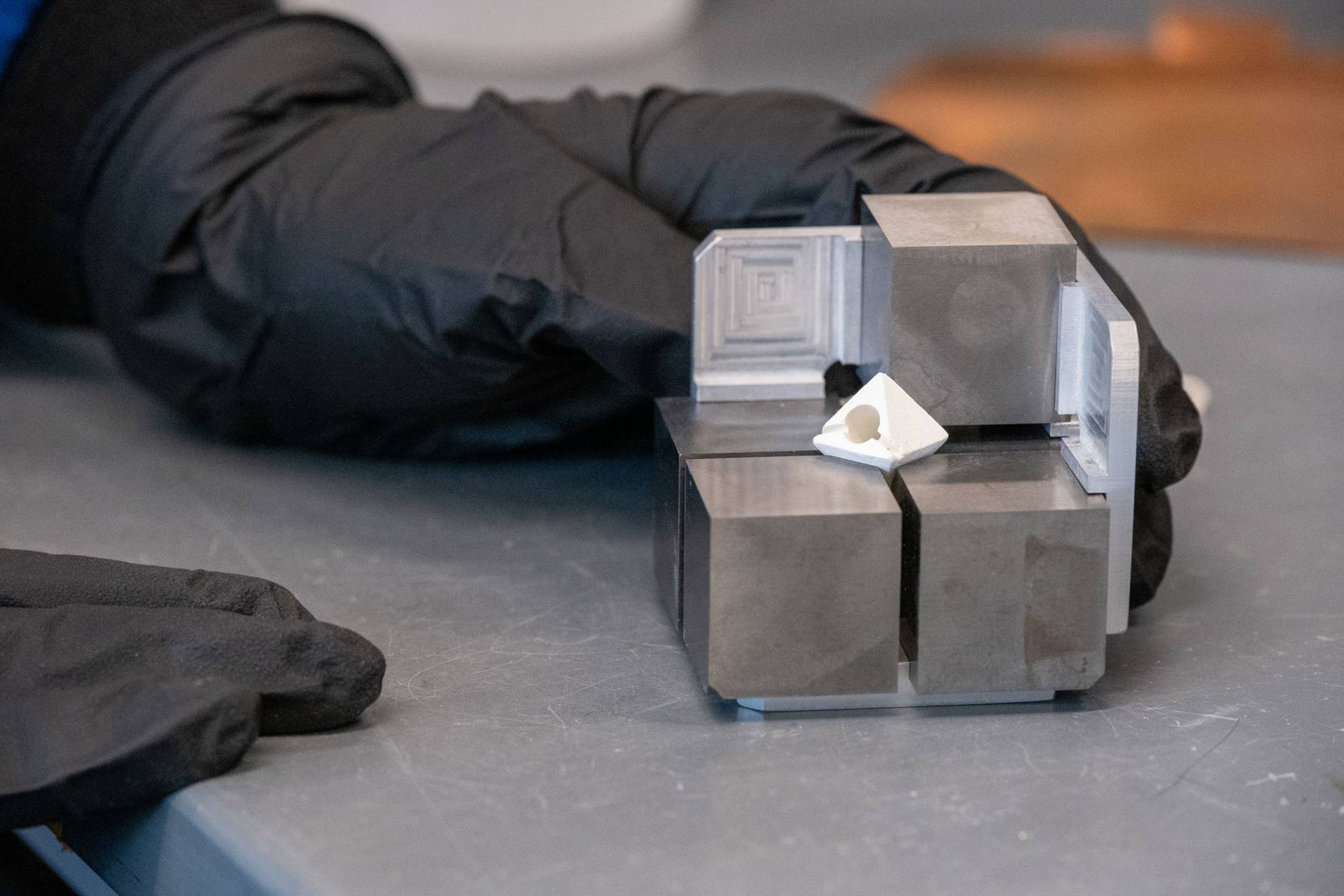 Powderly demonstrates how a sample octahedron is nestled into place between the tungsten carbide anvils, as they would be for the higher pressure (10 gigapascals) setup. A different setup allows materials to be subjected to 6 gigapascals of pressure. Listen to Powderly describe the capabilities of Karma, a multi-ton press.

Using Karma, Powderly assisted another graduate student, Danrui Ni, in creating three new compounds. Each one took multiple Karma runs to find successful conditions for synthesis and to optimize the purity of the sample.

The experiments resulted in three different journal articles, all published in 2019: one in January, one in May, and the third in December.

“Karma was one of the major things that I bought when I first came to Princeton, in the late 1990s,” Cava said. “Some new copper oxide superconductors had been made under pressure at around that time in Japan, and I wanted to try our luck at that. Making the machine work has resulted in some challenging interactions with both the machine and its maker over the years, but it has been well worth it. Karma is so cool that there is even one just like ours in the Smithsonian. It is an uncommon way to do chemistry, and there is always the opportunity to find something spectacular by using it.

“Coming in to work one Saturday and finding Kelly in the lab repairing the pressure-generating hydraulic pump for Karma has been one of the high points of my academic career,” said Cava. “She really cares about doing this kind of research, which in my opinion is the whole point of a graduate education.”

Karma can also generate temperatures up to 1,200 degrees Celsius (2,200 degrees Fahrenheit) — that’s three times hotter than the surface of Venus. Together, these variables shift the thermodynamic landscape of materials and compounds, influencing their stability and uncovering new phases with interesting properties that don’t exist under ambient pressure.

High pressure tends to favor denser materials and thus can stabilize denser phases. For some elements and compounds, high pressure can raise their melting point and boiling point, allowing for reactions between starting materials that at ambient pressure would melt or vaporize before there was enough energy to react.

“With these extreme conditions, there are times when your sample cube or some of the components of it break, and so your experiment just doesn’t run,” said Powderly. “Even if you do everything right, sometimes your thermocouple will still break or the cube will still crack. It’s never 100% guaranteed. But I just think high-pressure synthesis is so exciting. That’s sort of the business we’re in.”