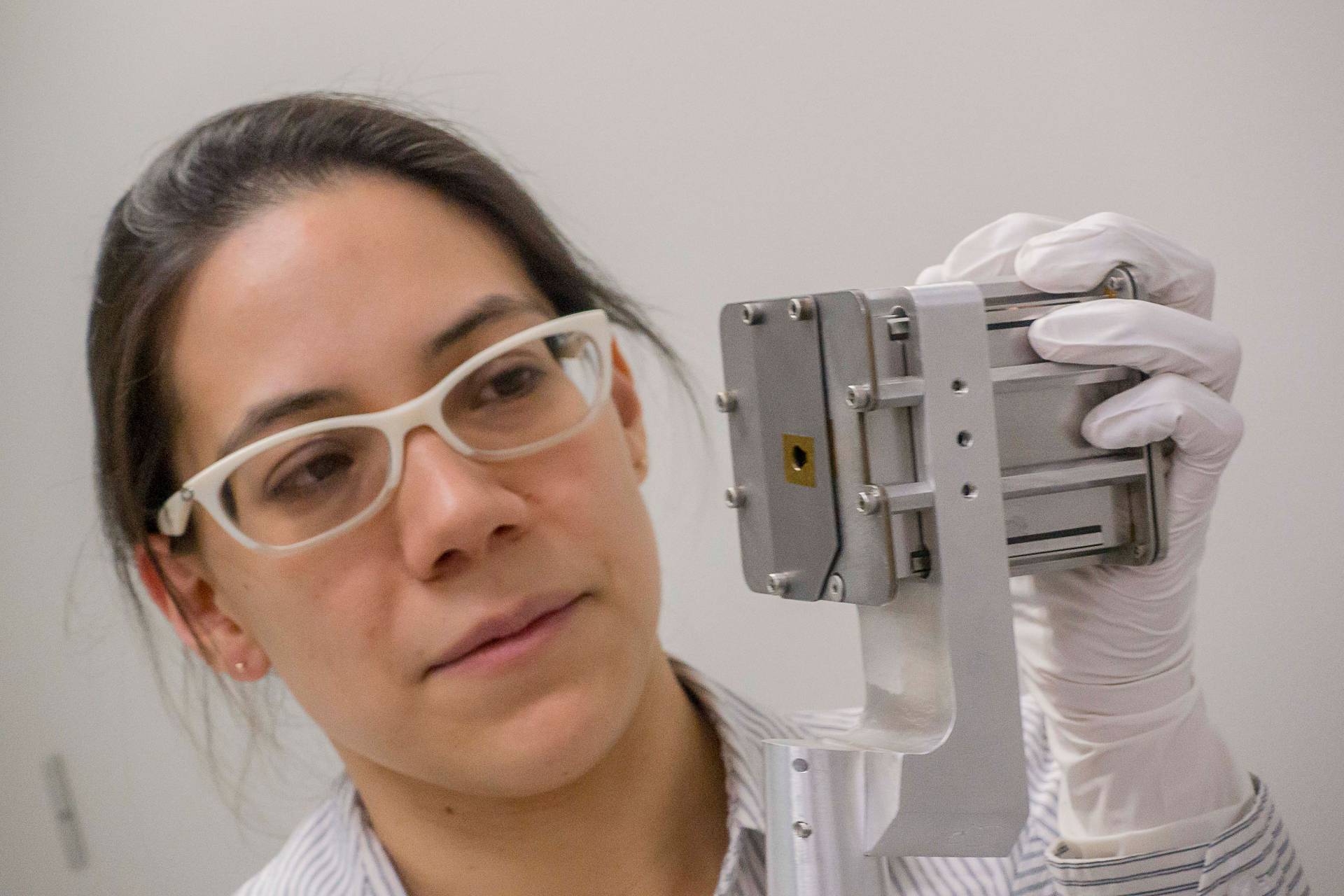 June Wicks holds a target assembly for ultrahigh-pressure laser compression experiments. The sample is mounted on the front of the box, compressed using laser pulses, and then probed by X-rays. The scattered X-rays are recorded by detectors that line the interior of the box.

Scientists have identified more than 2,000 of these “super-Earths,” exoplanets that are larger than Earth but smaller than Neptune, the next-largest planet in our solar system. By studying how iron and silicon alloys respond to extraordinary pressures, scientists are gaining new insights into the nature of super-Earths and their cores.

“We now have a technique that allows us to directly access the extreme pressures of the deep interiors of exoplanets and measure important properties,” said Thomas Duffy, a professor of geosciences at Princeton. “Previously, scientists were restricted to either theoretical calculations or long extrapolations of low-pressure data. The ability to perform direct experiments allows us to test theoretical results and provides a much higher degree of confidence in our models for how materials behave under these extreme conditions.” 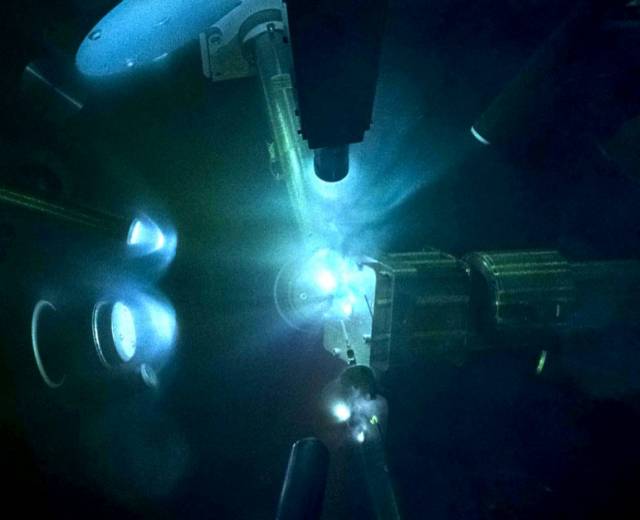 Inside the target chamber at the University of Rochester’s Omega Facility, lasers compress iron-silicon samples to the ultrahigh pressures found in the cores of super-Earths.

The work, which resulted in the highest-pressure X-ray diffraction data ever recorded, was led by June Wicks when she was an associate research scholar at Princeton, working with Duffy and colleagues at Lawrence Livermore National Laboratory and the University of Rochester. Their results were published today in the journal Science Advances.

Because super-Earths have no direct analogues in our own solar system, scientists are eager to learn more about their possible structures and compositions, and thereby gain insights into the types of planetary architectures that may exist in our galaxy. But they face two key limitations: we have no direct measurements of our own planetary core from which to extrapolate, and interior pressures in super-Earths can reach more than 10 times the pressure at the center of the Earth, well beyond the range of conventional experimental techniques.

The pressures achieved in this study, up to 1,314 gigapascals (GPa) are about three times higher than previous experiments, making them more directly useful for modeling the interior structure of large, rocky exoplanets, Duffy said.

“Most high-pressure experiments use diamond anvil cells which rarely reach more than 300 GPa,” or 3 million times the pressure at the surface of the Earth, he said. Pressures in Earth’s core reach up to 360 GPa.

“Our approach is newer, and many people in the community are not as familiar with it yet, but we have shown in this (and past) work that we can routinely reach pressures above 1,000 GPa or more (albeit only for a fraction of a second). Our ability to combine this very high pressure with X-ray diffraction to obtain structural information provides us with a very unique tool — there is no other facility in the world that can do this,” he said.

The researchers compressed two samples for only a few billionths of a second, just long enough to probe the atomic structure using a pulse of bright X-rays. The resulting diffraction pattern provided information on the density and crystal structure of the iron-silicon alloys, revealing that the crystal structure changed with higher silicon content.

“The method of simultaneous X-ray diffraction and shock experiments is still in its infancy, so it’s exciting to see a ‘real-world application’ for the Earth’s core and beyond,” said Kanani Lee, an associate professor of geology and geophysics at Yale University who was not involved in this research.

This new technique constitutes a “very significant” contribution to the field of exoplanet research, said Diana Valencia, a pioneer in the field and an assistant professor of physics at the University of Toronto-Scarborough, who was not involved in this research. “This is a good study because we are not just extrapolating from low pressures and hoping for the best. This is actually giving us that ‘best,’ giving us that data, and it therefore constrains our models better.”

A planet’s core exerts control over its magnetic field, thermal evolution and mass-radius relationship, Duffy said. “We know that the Earth’s core is iron alloyed with about 10 percent of a lighter element, and silicon is one of the best candidates for this light element both for Earth and extrasolar planets.”

The researchers found that at ultrahigh pressures, the lower-silica alloy organized its crystal structure in a hexagonal close-packed structure, while the higher-silica alloy used body-centered cubic packing. That atomic difference has enormous implications, said Wicks, who is now an assistant professor at Johns Hopkins University.

Wicks and her colleagues also measured the density of the iron-silicon alloys over a range of pressures. They found that at the highest pressures, the iron-silicon alloys reach 17 to 18 grams per cubic centimeter — about 2.5 times as dense as on the surface of Earth, and comparable to the density of gold or platinum at Earth’s surface. They also compared their results to similar studies done on pure iron and discovered that the silicon alloys are less dense than unalloyed iron, even under extreme pressures.

“A pure iron core is not realistic,” said Duffy, “as the process of planetary formation will inevitably lead to the incorporation of significant amounts of lighter elements. Our study is the first to consider these more realistic core compositions.”

The researchers calculated the density and pressure distribution inside super-Earths, taking into account the presence of silicon in the core for the first time. They found that incorporating silicon increases the modeled size of a planetary core but reduces its central pressure.

Future research will investigate how other light elements, such as carbon or sulfur, affect the structure and density of iron at ultrahigh pressure conditions. The researchers also hope to measure other key physical properties of iron alloys, to further constrain models of exoplanets’ interiors.

“For a geologist, the discovery of so many extrasolar planets has opened the door to a new field of exploration,” said Duffy. “We now realize that the varieties of planets that are out there go far beyond the limited examples in our own solar system, and there is a much broader field of pressure, temperature and composition space that must be explored. Understanding the interior structure and composition of these large, rocky bodies is necessary to probe fundamental questions such as the possible existence of plate tectonics, magnetic field generation, their thermal evolution and even whether they are potentially habitable.”