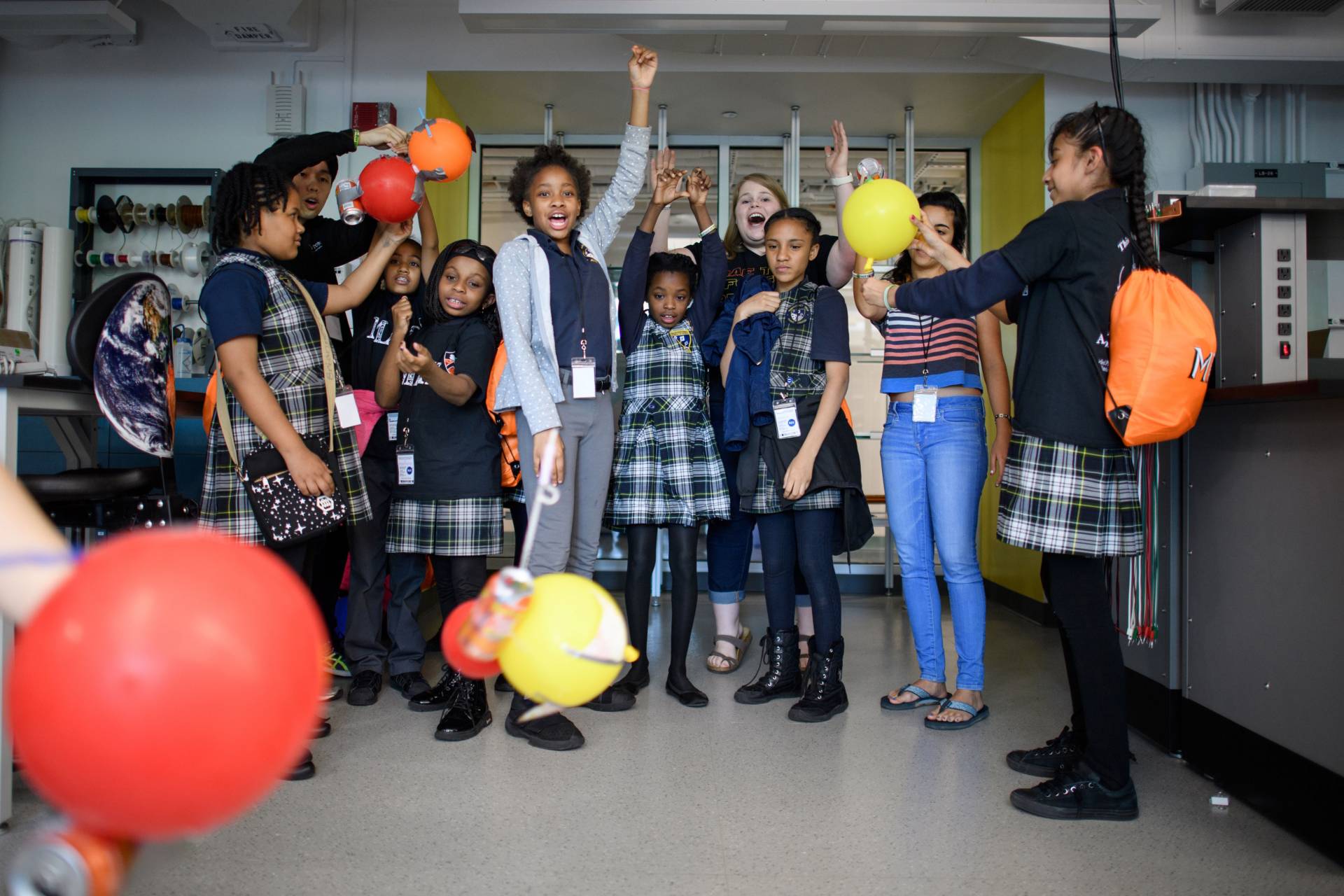 Harlem Prep students cheered as they shot their handmade rockets across a lab.

Fourth-grade students shrieked in glee as they shot handmade rockets, built earthquake-resistant houses with candy and designed fire extinguishers with Legos. For one day, the Engineering Quadrangle at Princeton University became a scientific playground as more than 80 students from Harlem Prep Elementary School in New York City learned about the field of engineering and how it benefits society.

The May 10th event, the 4th annual Harlem Prep to Princeton Program, was organized by the Department of Mechanical and Aerospace Engineering’s graduate program as part of an effort to broaden participation in science, technology and math (STEM) fields. The young scientists spent the day exploring multiple labs, where graduate students had a variety of demonstrations to show what it means to be an engineer and the vital role engineers play in everyday life.

“It’s great for them to see the potential of what they can do,” said Tyler Van Buren, a research specialist with the department and event organizer. 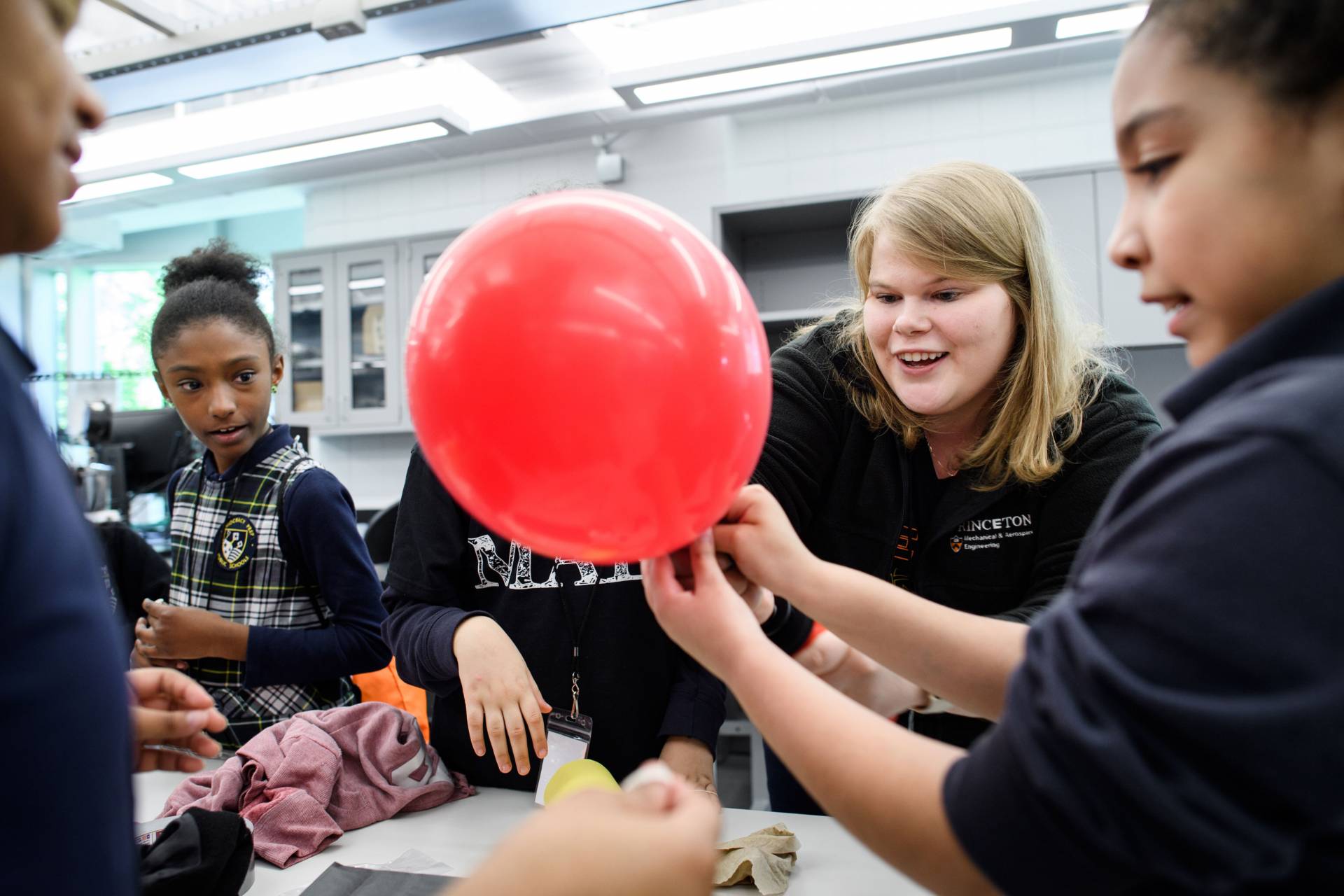 Twenty-two graduate students and two research staff members created and carried out the day's demonstrations and activities. This year the event also connected to a new graduate-level course — MAE 571, "Inspiring Young Engineers – Outreach" — created by Assistant Professor Marcus Hultmark. The 14 students in that class were able to test ideas from the semester in the demonstrations they created for the Harlem Prep visit.

"The goal is to show what engineers do and how society benefits from them," said Hultmark, stating that studies showed many people are not familiar with engineering. This is also an opportunity for graduate students to go beyond their own studies, to learn how to communicate ideas, and how to inspire others, he said. 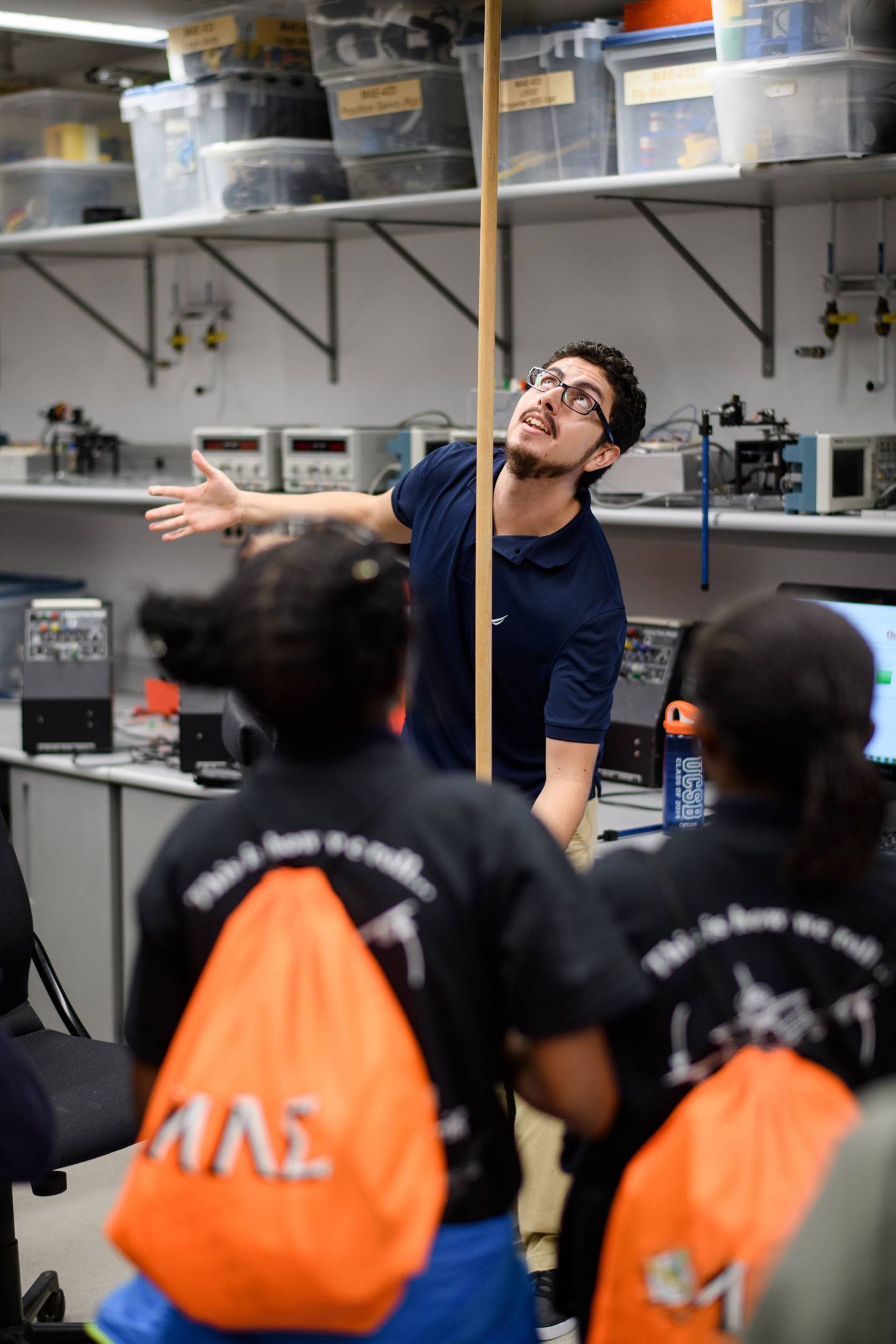 Hultmark started the class through conversations with graduate students about how they can improve the climate of STEM fields, including their attractiveness to women and under-represented groups. Topics in the class studied ranged from why women opt out of STEM fields to the sources of early interest in science. The Harlem Prep to Princeton Program was the perfect testing ground for their ideas, Hultmark said.

As part of their classwork, graduate students created new demonstrations for the event to make the experience more hands on and interactive.

By doing the hands-on work themselves, students will have a deeper more lasting experience, said Jennifer Kim, a Harlem Prep science teacher. “It’s also nice for the kids to see these graduate students spending time with them. The interaction makes a big difference.”

“It was through discussions with engineers that I realized I would fall in love with mechanical engineering - which I did,” she said. “I asked some students from Harlem Prep what they wanted to be when they grew up. Some replied: 'After seeing all these demos, I would like to be an engineer!' That was priceless.”

It was rewarding to see the students enthusiastic and engaged, said Betul Uralcan, a graduate student in the Department of Chemical and Biological Engineering, who took Hultmark's class. Her parents were inspirations for her in deciding to pursue an engineering career and she hopes to do the same by developing the skills to teach engineering through simple concepts.

“By teaching in a fun way, I hope they might get excited about engineering the way I did when I was a kid,” she said. 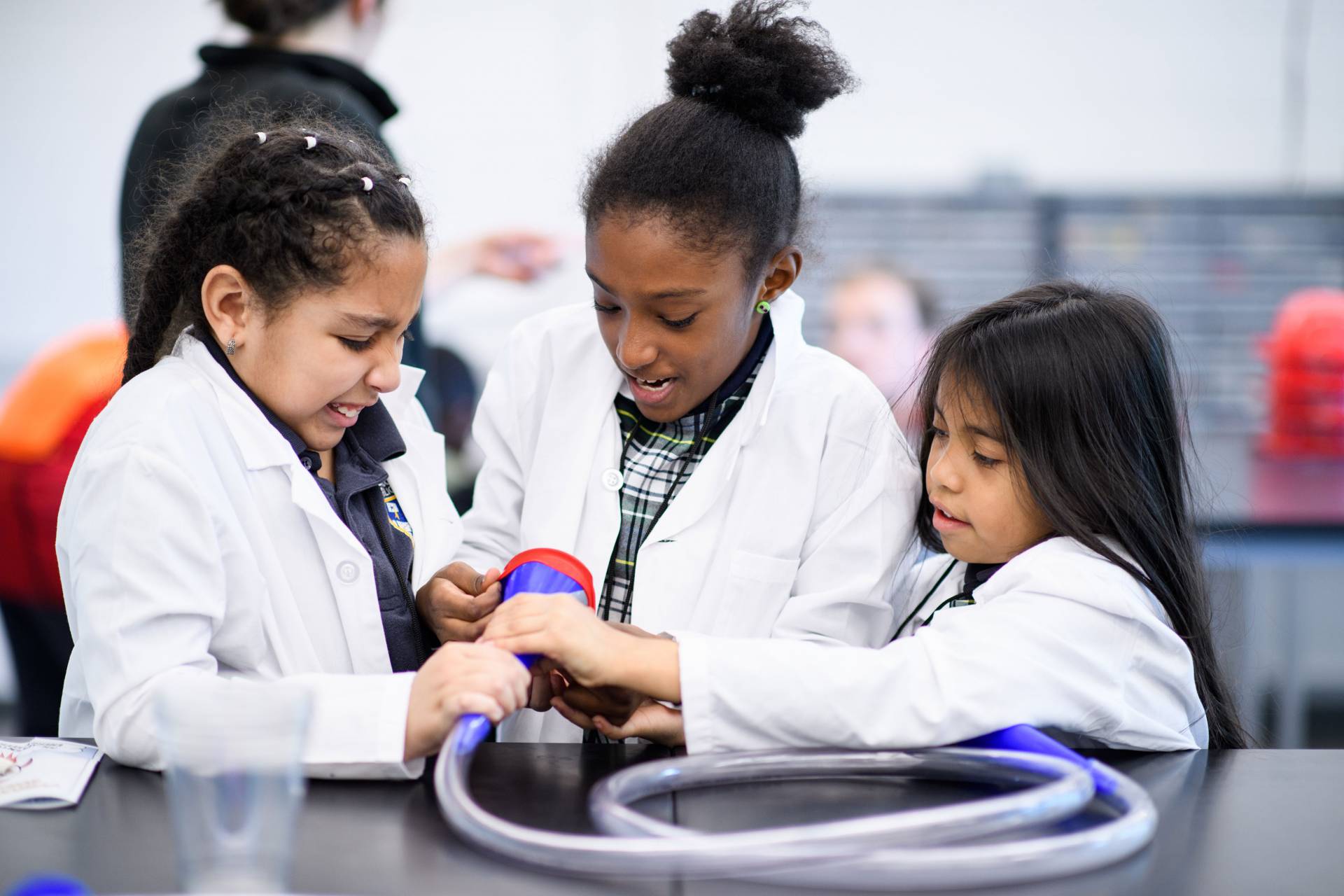 Harlem Prep students built their own stethoscopes while learning about how engineering is involved in the process. 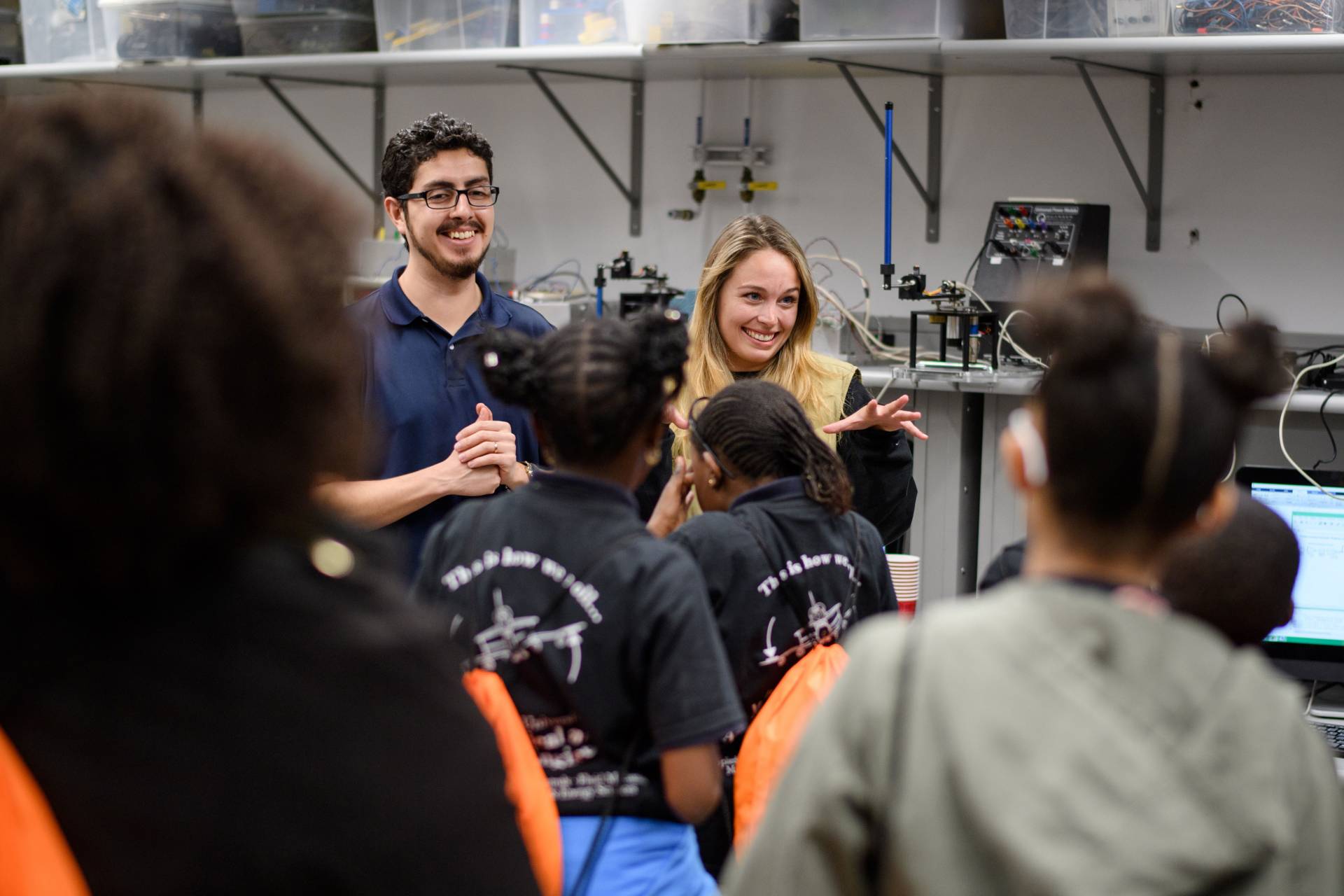