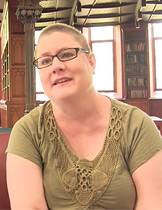 Beth Stroud, a doctoral student in religion and a teacher with the Princeton Prison Teaching Initiative (PTI), said the prisoners she has taught are some of the most motivated students she has ever met. Stroud is among the more than 70 University community members who volunteer to teach credit-earning college classes at New Jersey correctional facilities.

Beth Stroud, a doctoral student in religion and a teacher with the Princeton Prison Teaching Initiative (PTI), said the prisoners she has taught are some of the most motivated students she has ever met. Stroud is among the more than 70 University community members who volunteer to teach credit-earning college classes at New Jersey correctional facilities.

Two years ago, Reginald Murph was in prison for the second time. Today, he is a sophomore at Rutgers University. He credits Princeton University's Prison Teaching Initiative with helping give him a second chance.

Since the program began eight years ago, nearly 500 inmates have earned college credits by taking PTI classes. Credits may be transferred to any community college in New Jersey as well as a handful of public colleges and universities in the state.

In this video, PTI participants talk about how the program inspires both teachers and students.

"The Princeton classes made me feel like a student. And feeling like a student in prison was a really good feeling," said Murph, who is studying social work at Rutgers-New Brunswick. "To sit at my desk and really focus on writing an essay. To step outside of myself for an hour and feel like a somewhat normal person.

"I was doing something in prison. I didn't lose my hope. A lot of people in prison can go backwards, or stay the same. Or you can propel forward," Murph continued. "Education is necessary to propel forward."

PTI's mission is to reduce incarceration and recidivism rates in the state, especially among poor and minority communities, by providing inmates with the education and skills they need to lead productive, intellectually engaged lives while in prison and when they get out.

The program is coordinated by volunteers from Princeton's departments of astrophysical sciences and English, and is backed by the University's Pace Center for Civic Engagement.

"Princeton should be enormously proud of the people in this program," said Professor of Astrophysical Sciences Gillian Knapp, a longtime PTI teacher. "It's what this place is all about — Princeton in the nation's service. I can't really imagine many things that are quite as direct as this."

While PTI's greater goal may be large, its methods are modest and personal. 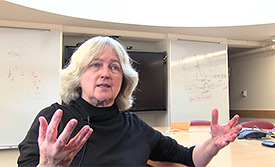 Professor of Astrophysical Sciences Gillian Knapp, a longtime PTI teacher, said the stripped-down setting of prison classrooms lead to moments of "pure teaching" where teachers and students often do their work with pencil, paper and a few books.

"It's pure teaching," said Knapp, who currently team teaches pre-algebra, pre-calculus and environmental science classes in three prisons. "It's chalk. It's waving your hands. It's talking to people. It's doing your calculations, your essays, your corrections in pencil and paper."

Knapp said this stripped-down setting — and that classes are a special privilege for prisoners living in an otherwise restricted environment — make for an engaged classroom. It has led to some of the most heartening teaching moments in her career.

"The students want this. They value what we do," Knapp said. "They listen carefully for two hours … you have their attention totally."

Knapp said many of her students have experienced poverty, poorly performing schools or other social and personal challenges that have limited their opportunities. The classes aim to provide them practical skills and confidence to better their lives.

"They are some of the most motivated students I've ever met," said Beth Stroud, a doctoral student in the Department of Religion who teaches English and a new religion course for PTI.

Stroud has found her own motivation through the program as she fights advanced lung cancer. While she underwent intensive medical treatments last semester, she spent her first "day off" at a prison education workshop talking with current inmate college students.

"Among other things, they stressed that they wanted to be graded and held to the same standards as other students would be," she said. "From that point on, it felt like [teaching in the prisons] was one of the very worthwhile things that I got to do last semester. I was not able to study the way I wanted to. I wasn't able to do research the way I wanted to do. But just the fact that I could do this was meaningful."

From one class to consortium

PTI was developed in 2005 when Mark Krumholz, now an astronomer at the University of California-Santa Cruz, came to Princeton as a postdoctoral fellow. Krumholz had worked in the Prison University Project at San Quentin, Calif., and proposed starting a prison teaching program at Princeton. It launched with a single math course in 2006.

The PTI classes are not counted as good behavior to reduce an inmate's sentence, and most prisoners participate with a sincere interest in learning.

"Students get a grade that appears on a transcript and that is very important to them," said Matthew Spellberg, a doctoral student in comparative literature who came to Princeton, in part, because of the opportunity to teach in prisons. "It's a kind of sign that something they are doing inside the prison has real weight in the outside world." 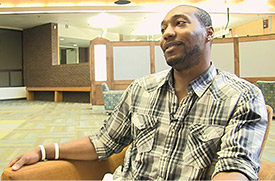 Reginald Murph credits PTI with helping give him a second chance. Murph started taking PTI classes during his second time in prison. He was later able to transfer his credits to Rutgers University-New Brunswick, where he is now an undergraduate student studying social work.

Last year, PTI established a program coordinator, Sandra Sussman, to support the volunteer efforts. The program also has expanded its partnerships with other higher education institutions through the New Jersey Scholarship and Transformative Education in Prisons Consortium (NJ-STEP). The consortium coordinates prison teaching programs with the New Jersey Department of Corrections and State Parole Board.

A number of PTI students have gone on to earn bachelor's degrees at Rutgers through its Mountainview Project, which offers support for students who were once in state youth correctional facilities. Former PTI student Murph credits the Mountainview Project and its founder, Rutgers Professor of History Donald Roden, with easing his transition from prison to college.

"Being in prison, sometimes you feel alone a lot. Out here, it's like a big sense of community," Murph said.

Knapp said she keeps in touch with many of her former students who are now undergraduates at Rutgers.

"To see for the first time, these guys who used to shamble into your class in their khakis … as ordinary young men, texting away, chatting happily, going about their lives and succeeding," she said. "It's just fantastic."

Separately, the University also is affiliated with the Petey Greene Prisoner Assistance Program. The independent nonprofit supports volunteers from colleges and universities to serve as tutors and teachers at state prisons, though those classes do not offer credit.

So how do volunteers actually get inside the prisons to teach?

"You have to imagine that you're teaching a class in an airport," Stroud said. "That to get to your destination, you'll have to go through security. It'll take a long time and there could be long waits."

In order to enter the prison, teachers go through metal detectors and a personal security check, following prison visitor protocols. PTI also must clear all teaching materials and books with prison security in advance.

Corrections officers escort teachers to their classrooms, though typically do not stay in the rooms. While PTI teachers have dealt with students being disruptive or goofing off, they said it has not gone beyond that.

"It's a very safe place to teach, oddly enough, however paradoxical that might sound," Knapp said.

PTI teachers describe the prison classes as fairly standard with blackboards and desks. There are, however, no calculators, projectors or other equipment found in modern classrooms.

"It is definitely just you and the students and maybe some books," Spellberg said.

For the prisoners, being a student means writing assignments by hand, relying on books from the prison library for homework and sharing one dictionary by sliding it under cell doors.

"It actually helps you be sharper because you're trying to perfectly write an essay," Murph said. "When I type an essay now [at Rutgers], I just do it quickly … I follow a very similar format that I learned from the Princeton classes that's going to help me probably throughout my whole life."

'Made me a better teacher'

Most PTI classes are team taught to ensure someone is always available to cover the weekly sessions. Teachers create the syllabi for their classes, and over the years, PTI volunteers have developed new course offerings for the prisons.

Volunteers said the experience of leading their own classes through PTI also benefits their academic lives at Princeton.

Knapp credits PTI with helping her become a better listener; better at reading if her students — whether they are in a pre-algebra class in prison or an astrophysics class at Princeton — really understand the material.

The personal rewards are particularly gratifying for graduate students and postdoctoral fellows in the early stages of their careers.

"You are genuinely pushed to be a better teacher because you will really be called out if you are not being a good teacher in this context," said Ross Lerner, a doctoral student in English who helps coordinate humanities courses for PTI.

Marcus Johnson, a doctoral student in politics and a new PTI volunteer, has already gleaned important wisdom: that teachers do not need to come prepared with all the answers.

"You can still go in and have an engaging discussion and help discover the answers together," Johnson said. "It has served as an opportunity for me to be encouraged that you have these experiences and you grow from them. And hopefully everyone learns together if it's successful."

Spellberg put it simply: "Teaching in the prisons has made me a better teacher."

"It's really taught me to value a certain kind of directness or pragmatism in the classroom, that the goal of being in a classroom, at any given time, is to achieve something," he said. "It may be a very local goal, maybe just figuring out what this poem means. Or it may be a bigger goal like teaching someone how to write."