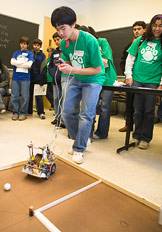 The 2009 New Jersey Science Olympiad gave students from regional middle schools and high schools a chance to put their science and engineering knowledge to work. Here, a student from Churchill Junior High School in East Brunswick maneuvers his robot around a playing field for "Robot-Cross," an event that required teams to build a homemade robot that could move small objects around a playing field. Some 600 students attended the event on Princeton's campus on Thursday, Jan. 8. 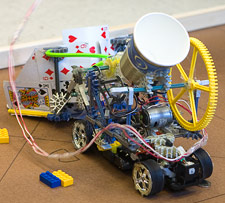 This robot, built for the "Robot-Cross" competition by students from New Providence Middle School, boasts a scooping device made out of playing cards.

The egg was doomed from the start.

The thin-shelled cargo was strapped to the front of a tiny car that careened along a hallway of Princeton's Jadwin Hall. The boys who built the car, Jared Schuller and Rafael De Los Santos, watched as it crunched into a low wooden wall. The boys cringed. Egg innards oozed down the wall.

The boys, both eighth-graders at nearby Hillsborough Middle School, were among the 600 middle and high school students who attended the New Jersey Science Olympiad on Thursday, Jan. 8, at Princeton. The tournament drew students from 60 schools around the state to compete in 30 events that tested their science knowledge and engineering skills.

The events, which were run by volunteers from the University and the Research and Development Council of New Jersey, included catapult, robot and bridge building -- tests of students' knowledge of ecology, meteorology and microbiology -- and the event that Schuller and De Los Santos entered, "The Scrambler." 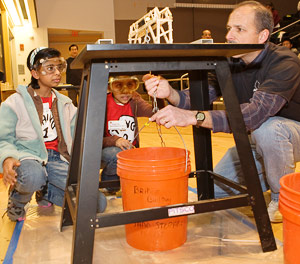 Joe Vocaturo, the lab manager for Princeton's civil and environmental engineering department, helps two students from Hammarskjold Middle School in East Brunswick test the strength of the bridge they built. Princeton staff, faculty and students volunteered to run the events at the Science Olympiad.

Of the lessons the boys learned at the Olympiad, one was clear: Science can be messy. The goal of The Scrambler was to launch a homemade car across the ground and come as close to a wall as possible without hitting it and crushing their egg.

The catch: The competitors didn't know until just before the event started how far the car would need to travel. That meant they had to design their car so the brakes could be calibrated on the fly to prevent their egg from being … well … scrambled.

The Hillsborough team's launching device worked well, but Jadwin's slick tile floors threw off their brake calculations. "We practiced on a shop floor that was rougher and covered in sawdust," said Schuller. "The different friction here made the car go farther."

Anthony Hoffman, an electrical engineering Ph.D. student who volunteered to judge The Scrambler, said it was his favorite event of the Olympiad. "The neatest thing is that there is an unknown variable," he said. "They have to set their machine in 10 minutes."

Hoffman was one of several volunteers at the Olympiad from Princeton's Mid-Infrared Technologies for Health and the Environment center, or MIRTHE, which focuses on producing devices that can detect minute amounts of chemicals found in the atmosphere, emitted from factories or exhaled in human breath. 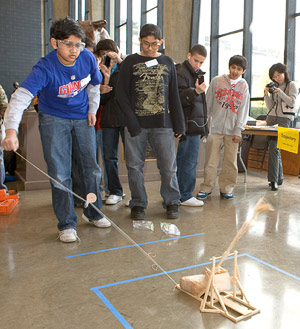 A student fires away during the "Trajectory" event, which required students to build a catapult to launch small balls at a target.

Another MIRTHE researcher, Yan Zhang, a civil and environmental engineering Ph.D. student, took a break from her thesis work -- developing mathematical models of the atmosphere -- to judge "Trajectory," the tournament's catapult competition. The event was held in the lobby of Jadwin Gym.

"When I was a middle school student, we had science competitions, but we just went into a classroom and solved equations," she said. "This is quite different. Here they get to apply the equations to the real world."

Nearby, Sirui Ma and Ankur Sare, sophomores from East Brunswick High School, were preparing to fire their knee-high catapult at the target, a square wooden platform.

Ankur used a laser pointer to target the platform and then cocked the catapult. He started the countdown, "Three, two, one…"

"Wait!" Sirui shouted. "There's no ball!" She grabbed their ammo -- a tennis ball -- and dropped it into the plastic cup at the end of the catapult's arm.

A sheepish expression on his face after the near-misfire, Ankur pulled the rope that released the catapult arm. The green ball flew in a head-high arc, landing on the wooden platform that stood about 10 feet away. The teenagers grinned at their success.

Students from East Brunswick High School calibrate their catapult to launch tennis balls at wooden targets during the "Trajectory" event. 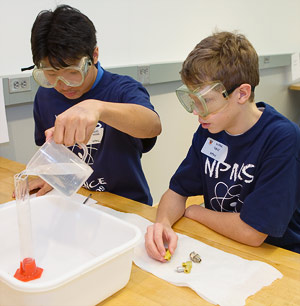 "It's amazing how many designs they come up with," said Whit Anderson, another judge of the event, who is an oceanographer from the Geophysical Fluid Dynamics Laboratory, a national laboratory located on Princeton's Forrestal Campus that studies natural and human-induced climate change.

Anderson worries that students in the United States may be falling behind those in other countries in science and mathematics, but said events like the Science Olympiad help counter that trend. "It builds interest in science," he said, "and it gives them self confidence."

The New Jersey Science Olympiad was started in 1993 and is a regional event of the National Science Olympiad, and nonprofit organization that seeks to improve the quality of science education and increase student interest in science, math and engineering. 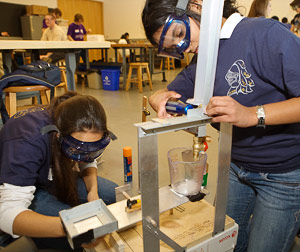 Two girls from West Windsor-Plainsboro High School North build a scale from scratch while competing in the "BioProcess Lab."

The top teams from the Princeton event qualified for the state championships held at Middlesex County College in Edison in March, which in turn serves as a qualifier for the National Tournament in Augusta Georgia in mid-May.