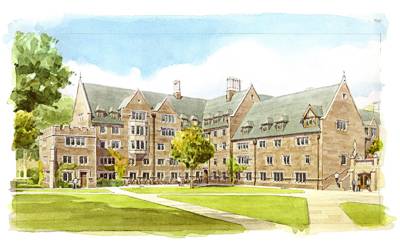 For the first time at Princeton University, a class that graduated after World War II will have a dormitory named in its honor. The new 1981 Hall, a gift from members of the class of 1981, will be located within the Whitman College residential complex, now under construction, and also will become the first dormitory to honor a co-educational class.

"This gift pays tribute to the generous and loyal spirit of the great class of 1981 and ensures that future classes will have an outstanding residential experience," said University President Shirley M. Tilghman.

The gift, from a group of alumni who wish to remain anonymous, comes as the class of 1981 prepares to celebrate its 25th Reunion in June. The new building will be the latest in a number of campus dormitories that commemorate classes, from the historic 1879 Hall, given in 1904 by Woodrow Wilson's undergraduate class during his presidency of the University, to the postmodern 1927-Clapp Hall, dedicated in 1988. The University began admitting undergraduate women in 1969, and 1981 Hall will honor a class that graduated 12 years after that.

"We are so proud to have a Princeton dormitory named for our class, especially as we gear up for what we hope will be a spectacular 25th Reunion,” said Class President Jean Telljohann.

The new hall, designed like the rest of Whitman in collegiate gothic style by the noted architect Demetri Porphyrios, a 1980 Princeton graduate alumnus, will be a five-story, L-shaped structure that overlooks two courtyards. It will house 111 undergraduates in single rooms and suites, and contain two suites for graduate students as well. Under its slate roof will be a number of amenities for use by all residents in Whitman College's dormitories, including a multipurpose room, television lounge, dance studio and digital photography lab.

Whitman College will serve as one of three residential colleges in which undergraduates may live for their entire four years at Princeton. Located between Baker Rink and Dillon Gymnasium, it will also allow for an 11 percent increase in Princeton's undergraduate population, from about 4,700 to 5,200 students.