One of world's fastest supercomputers to aid Princeton researchers 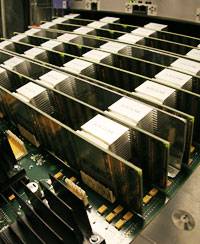 Blue Gene, named for the genetics research for which it was initially designed, is made up of 2,048 processors per rack. It calculates problems almost 1,000 times faster than a typical desktop personal computer.

Below left: Curt Hillegas (right) of Princeton’s Office of Information Technology and Frank Ingram of IBM Blue Gene Serviceability Development examine a node card from the new high-performance computer installed on campus. The Blue Gene, which is a little larger than a refrigerator, is one of the world’s fastest supercomputers and is intended to support research solving complex problems.

A unique partnership between Princeton scientists and information technology administrators has brought one of the world's fastest supercomputers to the University to spur advancements in research.

Working with IBM, the University's Office of Information Technology (OIT) collaborated with Princeton researchers to purchase and install a "Blue Gene" high-performance computer that will aid current and future research solving complex problems in areas including astrophysical sciences, engineering, chemistry and plasma physics. The University plans a ribbon cutting Nov. 22 to inaugurate the computer that was installed last month.

"We are excited about the possibilities for collaborative research among faculty that this extraordinary resource will allow," said Betty Leydon, Princeton's chief information officer and vice president for information technology. "Having OIT, the Princeton Institute for Computational Science and Engineering, the School of Engineering and Applied Science, and several individual faculty members contribute to the cost shows that we all recognize the value of working together to build the best possible IT infrastructure to support research at Princeton."

Princeton expects its new supercomputer to claim a spot in the top 100 of the world's highest performing computers on the "Top500 Supercomputer Sites" list that will be released by the computing industry next week.

Fewer than 10 other U.S. universities in the top 100 have supercomputers on their campuses not affiliated with federal agencies, according to the 2005 Top500 list compiled by computing labs at Germany's University of Mannheim, the University of Tennessee and the Office of Science in the U.S. Department of Energy.

"This supercomputer should enable research that will help Princeton build its reputation as a computational research center," said Maria Klawe, dean of Princeton's engineering school. "We will now have advanced resources for researchers who need them to process data for highly complex operations." 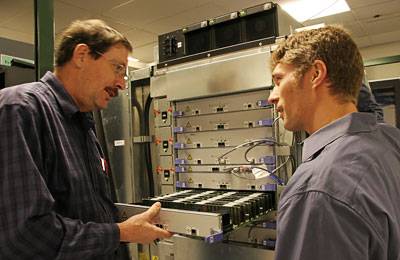 The new supercomputer should also position the University to be a better funding target for science and research organizations attracted to institutions that can demonstrate the greatest computing efficiency, according to Curt Hillegas, manager of computational science and engineering support in OIT's academic services department.

"More of the funding can go directly to research because we have already pooled our resources to support the computing infrastructure needed for projects," said Hillegas, who has been leading the effort to provide centralized computing support to University researchers.

Blue Gene, named for the genetics research for which it was initially designed, is made up of 2,048 processors. It calculates problems almost 1,000 times faster than a typical desktop personal computer and allows researchers to partition it to use part of its capacity for less complex jobs or multiple tasks.

Astrophysics problems that involve modeling the universe, for example, or aerospace engineering computations to determine the forces that might act on the wing of a jet plane could occupy one part of the Blue Gene, while another part is modeling a chemical system that might require different processing capacity.

"The decision about what type of computer we would acquire was really done with the faculty taking the lead because they know what they need to model complex interacting forces," said Serge Goldstein, director of the academic services department in OIT. "This new computer will be available initially to the researchers who contributed funding as we get familiar with it, and then we'll make it available through an application process to the general campus community in a couple of months."

A little larger than a refrigerator and assembled and tested by engineers in IBM’s Rochester, Minn., facility, the Blue Gene that administrators plan to call "Orangena" -- to incorporate aspects of its original name and one of Princeton's colors -- was installed for early testing by IBM engineers and consultants on Oct. 18 in the computing center at 87 Prospect Ave. on Princeton's campus.

The University had been working for three years to centralize computing support for researchers who typically have had to buy their own computers, and began working with IBM to bring the Blue Gene to campus last spring. Researchers selected IBM for the company's potential as a future partner in collaborative research, in addition to the features of its supercomputer.

"IBM Blue Gene has once again risen as the computational system of choice to tackle some of the most compelling, demanding problems facing scientists today," said Dave Turek, vice president of Deep Computing at IBM, the world's largest information technology company. "Princeton's important areas of study, such as astrophysical sciences, engineering, chemistry and plasma physics, are ideal applications for the world-record performance of the Blue Gene Solution."

While the Office of Information Technology paid for about half of the new Blue Gene in a unique collaboration, the Princeton Institute for Computational Science and Engineering, the School of Engineering and Applied Science and individual faculty members made significant contributions toward the purchase.

"My involvement began because I saw a use in my research for demanding computations in predicting structures for protein folding, computations in metabolic networks and other areas," Professor of Chemical Engineering Chris Floudas said.

Floudas is one of seven Princeton researchers who contributed personal grant funds to help buy the supercomputer. Academic administrators, such as Klawe of the engineering school, also supplied funds to support the research of their faculty.

William Tang, the chief scientist at the Princeton Plasma Physics Laboratory and a professor of astrophysical sciences, said he played a key role in selecting the Blue Gene because of the potential it will unleash for bringing scientific advancements about more quickly.