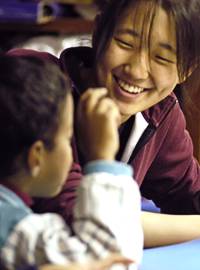 Junior Lisa Chung tutored 7-year-old Mario at the Pannell Center as part of the Spanish Skills at Work Program. The effort is intended to provide students with opportunities to improve their Spanish skills and, at the same time, help the community.

At 10 a.m. on a Saturday in late October, nine University students took on the role of Spanish instructors at the Henry Pannell Learning Center on Clay Street in Princeton.

Their pupils ranged in age from 5 to 45. Sophomore Karen Jeng huddled with a woman who had brought stacks of books with her. Freshman Shivani Gupta made flashcards with a 5-year-old named Kevin, who later told his mother that Gupta was his favorite teacher.

The two-hour session was part of a new program called Spanish Skills at Work, which brings together Spanish students from the University and members of the community who want to work on their writing and comprehension of Spanish or who need the help of translators.

“It is very often the case that students can learn more out of the classroom than in the formal environment of a class, especially in foreign languages,” said Luisa Duarte-Silva Barry, a lecturer in the Spanish and Portuguese department who created the program. “I look for opportunities in which the students can use their Spanish skills while helping the community. Knowing the language acquires a different meaning once the students are able to put it to practical use, especially when the circumstances are as rewarding as helping the community.”

So far the students are reaching out to the community as translators in the emergency room and the clinic at the University Medical Center at Princeton, as Saturday morning tutors at the Pannell Center and as trained volunteers with the Mercer County chapter of the Literacy Volunteers of America. They also helped out at the World Heart Day festival at the medical center, where students translated for English-speaking doctors and Spanish-speaking patients, and were planning to lend their assistance at the health fair there on Nov. 12. The Pannell Center program is co-sponsored by Community House.

Gupta got involved with the program because “I love the Spanish language and I hope to pass this enthusiasm to the kids,” she said. She anticipates that her volunteer work also will help her improve her Spanish.

Uma Tadepalli, a junior who helped a 10th-grader with subjunctive verbs at the Pannell Center, found the experience “exhilarating. It tested my abilities to think on my feet, as we were constantly coming across questions I wasn’t so sure of the answers to. As they say, the best way to learn is to teach. I’d say the most rewarding part of my experience so far was knowing that it was a win-win situation for the tutor and student. The girl I was helping and I both came out of the experience with a much better understanding of the subjunctive.”

At the medical center, the students have translated during general exams, relaying the doctor’s questions and the diagnosis to the patient. The work is especially challenging, pointed out sophomore Sarah Maguire, because of the medical terms being used. Maguire, who is considering a career in medicine, said, “There’s nothing more rewarding than seeing that my Spanish can be used not only for conversing with people, but also for helping them live happier, healthier lives.”

“These students’ efforts are making significant contributions to the community,” said Kiki Jamieson, director of Princeton’s Pace Center, which focuses on civic engagement. “Providing an opportunity to use and improve academic skills in the community — in a way that adds value to our neighbors — is a wonderful example of Princeton’s commitment to academic excellence and active citizenship.”

Several of the student volunteers are enrolled in one of two courses taught this semester by Barry, sections of “Advanced Spanish” and “Studies in Spanish Language and Style” that focus on medical issues. The classes, intended for students who have a strong interest in the sciences, increase students’ Spanish proficiency while covering issues such as sending medical aid to developing countries and the value of cultural diversity in medicine.

Peyton Thompson, who is taking one of the courses, hopes to become a doctor. Last month she volunteered to translate for the nurses at a diabetes screening held at a church in Hights-town with mostly Spanish-speaking members.

“My dream is to start medical clinics in Latin American countries when I’m a doctor some day,” Thompson said. “So medical Spanish has been a great class for me, and translating that day was really neat because it’s what I want to be able to do in the future.”

And the program is helping students realize the power that comes with being able to communicate with others in their language.

“My parents knew no English when they came to the United States from Korea 20 years ago, and only last year did I take Korean language classes to learn their language,” said junior Lisa Chung. “Their English is better than my Korean, but we will always have communication problems. I think this is why I’m particularly drawn to help out in language programs such as this one. Language invites you into a community, but it’s not the easiest thing to acquire. I’ve had the luxury of having teachers stick by me for the four years that I’ve been trying to figure out Spanish; surely I can spend an hour on a Saturday morning to make flashcards with someone who wants to learn how to count from 1 to 20 in Spanish.”