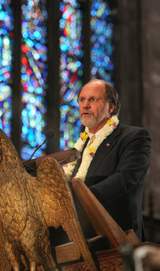 Jon Corzine spoke at an interfaith prayer service at the Princeton University Chapel hours before his inauguration as New Jersey governor.

Above left: The sounds of a Jewish children’s choir from Lawrenceville filled the air of the University Chapel during the interfaith service.

Below left: A gospel choir with members from numerous New Jersey churches offered several musical selections in between remarks from clergy members from around the state. 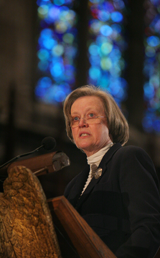 In her welcoming remarks, Princeton President Shirley M. Tilghman noted the historical connections between the University and the governor’s office. 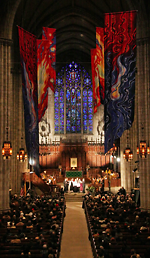 The Princeton campus community welcomed Jon Corzine on the day of his inauguration as New Jersey's 54th governor.

Hours before his inauguration on Jan. 17, Corzine spoke in the University Chapel at a morning prayer service, which featured remarks by some 20 clergy members from around New Jersey representing a wide range of faiths. The governor's inaugural ball was held that evening in Jadwin Gymnasium.

"It is wonderful to be here in this magnificent chapel and this great university, which represents so much of what is good in New Jersey and in the nation," Corzine said at the morning service.

Princeton President Shirley M. Tilghman offered a welcoming address at the interfaith service, noting the historical connections between the University and the governor's office. Eleven Princeton alumni have served as New Jersey's governor, including former University and U.S. President Woodrow Wilson (class of 1879), Brendan Byrne (class of 1949) and Thomas Kean (class of 1957).

"For our University community, the inauguration of a new governor is an event of more than 'academic' interest. From the time of Princeton's founding in 1746, the governors of New Jersey have been ex officio trustees, and since 1945, they have officially been our neighbors, first at Morven and now at Drumthwacket," Tilghman said, referring to two historical governor's residences close to the Princeton campus.

Tilghman said that the University community looks forward to working with Corzine. "We salute his commitment to public service and hope that his example will inspire others to enter lives of public service," she said. "Like him, we are anxious to make New Jersey a better place for all, sharing our knowledge and resources with its people, its industries and institutions and, of course, its government."

In addition to the speakers, the service featured musical selections by an adult gospel choir from many New Jersey churches and a Jewish children's choir from Lawrenceville.  Corzine thanked them for an "extraordinary demonstration of our faith as a people."

Corzine, who served as U.S. senator from New Jersey since 2001 prior to taking office as governor, said that "the spirit and beauty of the pluralism that we have heard today" is reflective of the state itself. He offered a brief outline of the vision for his administration, emphasizing a focus on fiscal integrity, property tax reform, education, health care and safety.

"We must find the resources and the will to protect the vulnerable, even if it comes with a political price," he said. "New Jersey has always been a progressive state on both sides of the aisle, with progressive values, and I will work very hard to sustain those values."

University community reflects on year of responding to Sept. 11 tragedy