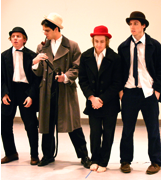 Four seniors who have starred in numerous shows at Princeton will perform a thesis production of Samuel Beckett's classic play, "Waiting for Godot," at 8 p.m. Thursday through Sunday, Feb. 9-12, and Thursday through Saturday, Feb. 16-18, at the Matthews Acting Studio, 185 Nassau St.

The play is presented by the Program in Theater and Dance and the Fund for Irish Studies.

"Waiting for Godot" features seniors John Doherty, Ben Mains, Jed Peterson and Paulo Quiros, who have performed in an array of productions of the theater and dance program, the Triangle Club, Theatre Intime and the Princeton Summer Theater. The performance is directed by Tim Vasen, a lecturer in the Council of the Humanities and the Program in Theater and Dance.

Beckett's tragicomedy juxtaposes imagery from the Bible, Japanese Noh drama and the Marx Brothers' "Duck Soup" to create a funny and poignant epitaph to humanity's powers of invention. "'Waiting for Godot' is the Mount Everest of the modern theater landscape -- we all know it's out there, we all acknowledge its importance, but few of us ever bother to make the climb," Vasen said. "It is both funnier and darker in the flesh than it is on the page, because it is above all a play and has to be performed to be understood."

"For me and the outstanding cast of graduating seniors, it has been some of the hardest and most rewarding work we've ever done," Vasen added. "Beckett asks a lot of his actors and a lot of his audience, and in return offers up great gifts of wit and insight, and, most importantly, the glimmer of an understanding of the nature of time."

Tickets are $8 for students, faculty and staff; $10 for the general public; and free for Tiger Tickets holders. They are available online through University Ticketing or by calling the Frist Campus Center ticket office, (609) 258-1742.

In honor of the 100th anniversary of Beckett's birth, the Fund for Irish Studies also will sponsor a series of events Friday, April 14, including a presentation by Irish photographer John Minihan, a discussion featuring several Princeton faculty members and a documentary about Beckett by director Sean O'Mordha. More information is available at www.princeton.edu/~visarts/Beckett.htm.

Kenyan play has its American debut in Princeton